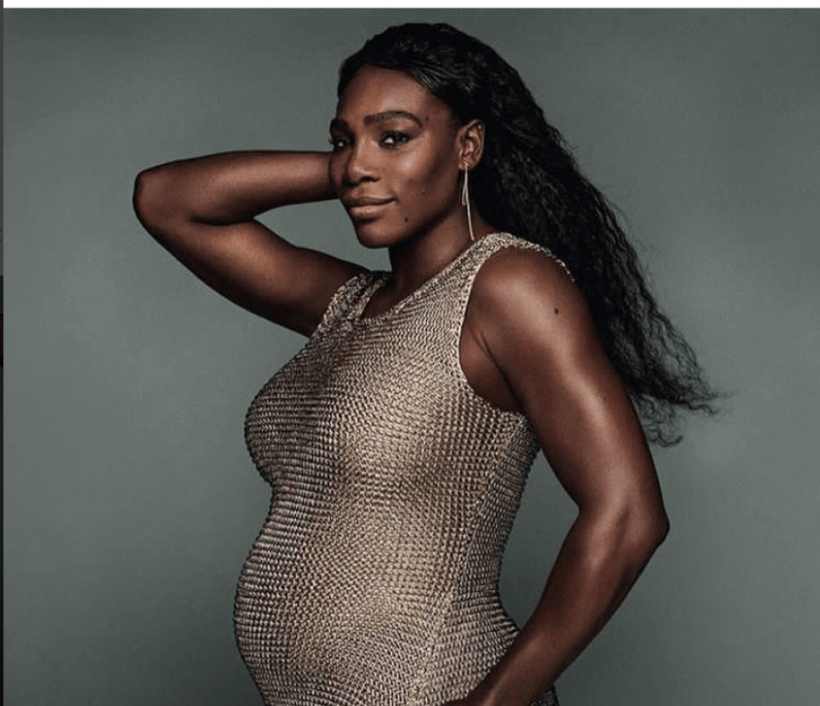 Let’s stop all this one-size-fits-all, unrealistic expectations approach to pregnancy, and let’s put our energy into making sure that pregnant people have the support and resources they need for themselves, their fetuses, and their kids. (Image Credit: Instagram/stylish_bump)

When Serena Williams won the Australian Open, it was a major achievement — a record 23rd major singles title. When she announced that she was expecting her first child, it didn’t take the mathletes of the interweb long to work out that she had won her 7th Australian Open while eight weeks pregnant (and without dropping a single set)!

This was another of many massive achievements in the career of a woman who has not only had to perform at an elite level, but had to do it while dealing with an onslaught of racism, misogyny, and body shaming. (Though, in a sadly predictable move, some decided to question Serena’s decisions about playing in the Open, using this opportunity to add to the constant mistreatment she endures.)

Then there is Gal Gadot. She kicked ass, raked in money at the box office, and redefined women’s roles in movies based on comic books in her role as Wonder Woman. As if that weren't enough, it came out that when it was time for re-shoots, Gadot was five months pregnant. So she threw on an outfit with green fabric over her stomach so that her body could be matched in post production. Then, looking like, in her own words, “Wonder Woman pregnant with Kermit the Frog,” she went after it — running around, wielding weapons, and performing choreographed fight scenes.

Both of these are obviously amazing achievements and I’m all for women kicking ass and making their own decisions about their bodies.

But the way these two women’s stories are being covered and discussed also makes me concerned about unrealistic expectations that are foisted upon pregnant people.

We already have the ludicrous “get your pre-baby body back” obsession. This suggests that those who have given birth to a tiny baby human (who can’t wait to keep them up all night while their parents deal under the constant fear that any tiny mistake might end the baby human’s life) should immediately prioritize trying to make their bodies look like none of this has happened. Now there is pressure to perform Herculean (or is it Wonder Womanian?) tasks while pregnant.

My concern here is not hypothetical. It started with a Facebook message from a friend of mine that read “I don’t know if I want you to talk me into, or out of, killing my husband.” She is eight weeks pregnant (just like Serena was when she won the Australian Open) and she is not having a good time. Her morning sickness (or, as she has taken to calling it, “all goddamned day sickness”) is kicking her ass. She feels exhausted all the time — she told me (on condition of anonymity) that she watched several episodes of Keeping Up With The Kardashians because the remote was across the room and she didn’t want to get up.

It seems there is tremendous pressure on pregnant folks to move through life as if pregnancy doesn’t affect them, with standard-setting for what pregnancy “should” look like coming from elite athletes and Hollywood stars who are having, by and large, atypical experiences.

On the night of the Facebook message, she asked her husband if he would mind doing the dishes — even though he had cooked and they typically had a “you cook and I clean” arrangement. That’s when her husband unwittingly took his life into his own hands saying, “If Serena can win an Open pregnant, I don’t understand why you are having such a hard time with basic stuff.”

It’s not just empathy-challenged partners who concern me. Pregnant people already face tremendous challenges to getting basic support during and after pregnancy in everything from affordable healthcare to reasonable accommodations at work to maternity leave to support for feeding (whether they choose to breast/chest feed or another option) to affordable, quality childcare. (Not to mention, far too many parents are forced back to work before they are ready.)

So the last thing they need is the message that they can (and should) be able to work at the level of professional athletes and actors while they are dealing with the life-altering symptoms that happen when you are growing a fetus.

It seems like more and more there is tremendous pressure on pregnant folks to move through their lives as if pregnancy doesn’t affect them, with standard-setting for what pregnancy “should” look like coming from elite athletes and Hollywood stars who are having what are, by and large, atypical experiences.

That unrealistic expectation setting is not usually something that works out very well for anyone, and this is no exception. Let’s celebrate pregnant people dealing with pregnancy in whatever way they (and whomever they decide to include in discussions) decide is best.

Let’s stop all this one-size-fits-all, unrealistic expectations approach to pregnancy, and let’s put our energy into making sure that pregnant people have the support and resources they need for themselves, their fetuses, and their kids.

If you like this article, please share it! Your clicks keep us alive!
Tags
Serena Williams
pregnancy
body acceptance
body after baby