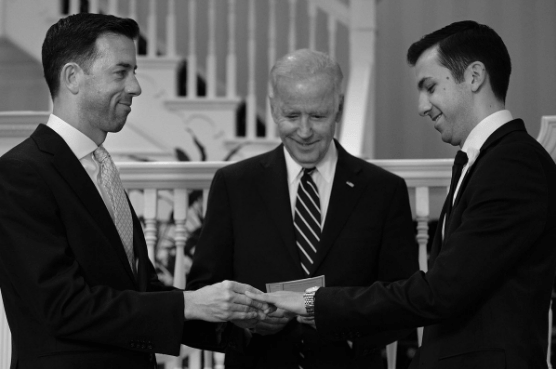 "I think we can all join him in wishing the couple many happy years together!" Image: Twitter, Vice President Biden

Joe Biden has been a lot of things to a lot of people. He was a senator for the people of Delaware. He was the grieving father and widower who was a public servant by day and took the train home to care for his family by night. He’s been the vice president who says what we all think.

This week, he added another item to his resume: wedding officiant.

Biden posted a lovely photo on his Twitter feed, showing himself performing the marriage ceremony for two White House staffers. The wedding took place at the vice presidential residence in Washington, DC.

Did I mention that both members of the couple being married were men? Yep. They were. Brian Mosteller, the director of Oval Office operations, and Joe Mahshie, a trip coordinator for Michelle Obama, said, “I do” on Monday afternoon.

This was the first time Biden has ever performed a wedding ceremony. I think we can all join him in wishing the couple many happy years together!