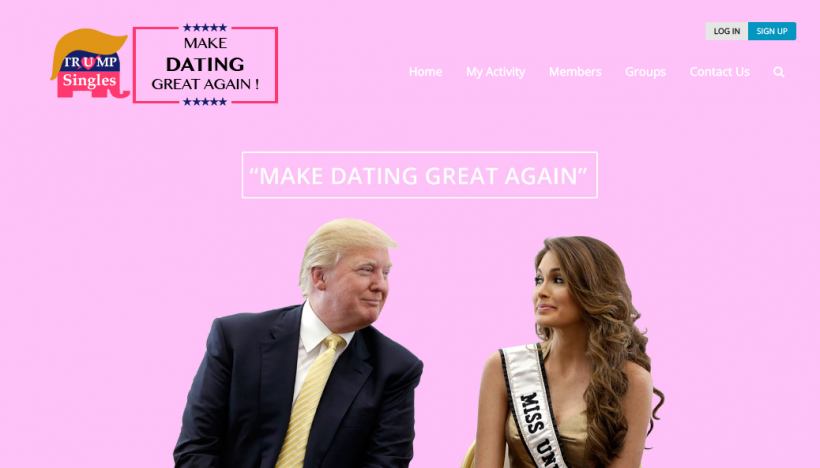 If the first line of your personal dating profile reads: “Must love combovers, bankruptcy court, and misogyny,” have I got good news for you! There is now a special dating site just for singles who support Donald Trump.

Why is this necessary, you ask? Probably because so many people have been out on first dates and casually let it slip that they attended a Trump event only to have their date do a spit-take and suddenly remember a pressing engagement that required them to shove all remaining bread sticks into their purse and flee the premises as fast as possible.  TrumpSingles.com founder Dave Goss says his friends have had that exact thing happen to them. He tells the New York Post, “I think there’s a special stigma when people say they’re supporting Trump, because of some of the brash things that he’s said. That immediately gets [projected] on his supporters, and it makes it hard for them when trying to date.”

Yeah, I can see how it would be hard to find love when your political idol wants to prevent Muslims from entering the country and has a habit of calling women "fat pigs." You’d be all like, “Yeah, I’m voting for a guy who disparages minorities and women but only because I, too, enjoy abusing tax loopholes for my own personal gain. Now, what were you saying about your work teaching immigrants to read Engli— Hey, wait. Where are you going? What did I say?”

So far, TrumpSingles has about 500 members, and Goss is hoping to launch an app soon.

Not to be outdone, the progressive side of the political equation has its own site for Bernie Sanders adherents. You can click on over to BernieSingles.com to start a revolution with a like-minded Berner.

I tried to do due diligence and peruse both sites, but the Bernie one required starting an account to see profiles, so I can neither confirm nor deny that any profiles say “Feel the Bern…in bed!” (I really hope someone writes that.) The TrumpSingles site is overloaded, so I can’t get there at all — but I imagine profiles there say “Make America great again… in my pants!” or “Come to my place and I’ll comb you over, baby!”.

There is no word on if anyone is actually falling in love on either site.

If you like this article, please share it! Your clicks keep us alive!
Tags
donald trump
bernie sanders
Sex
dating