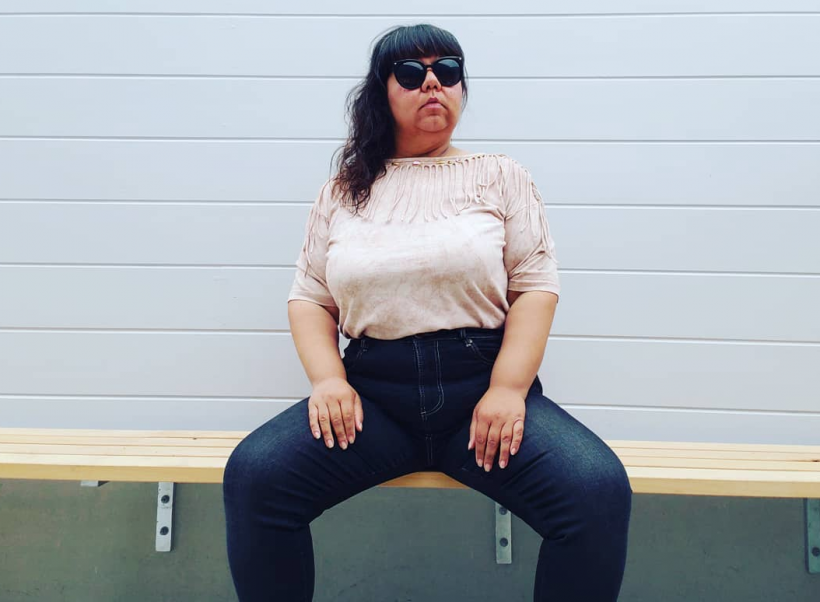 I was one of three fat people at this daytime party in Soma — a higher than usual proportion for San Francisco, actually.

When I got there I looked for other chubsters in the room, like I was scanning for good luck charms or touchstones and that's when I saw her: a fat brown babe in a sparkly cardigan.

I'm sure she didn't notice me because she was cutting so many rugs so hard. She looked right at home.

I hadn't been to a club like this one — the kind full of straight men who are probably homophobic and at least a little coercive, who smell like Old Spice deodorant and have enough disposable income to keep an open tab (the kind of men I'd been taught were "a catch") — for a very, very long time. I tried to remember exactly how long. A decade? More?

I was behind her wearing a black crop top sweater with Cher fringe, which I was using to make my combination of Stevie Nicks and Pulp-Fiction-Uma-Thurman moves more exciting and mysterious.

I had carefully chosen my outfit. The sweater had a high collar and had just enough flare to start a conversation with a style-minded woman or femme, but not a dude. And then the boring jeans — an attempt to convey that I had no interest in joining the meat market side of this dance party — both because it was true and also as a defense mechanism to stave off the silently aggressive behavior that happens when I'm perceived as encroaching on a space that straight men have claimed as their territory for picking up the kind of women who will increase their social status — not women like me. There was a price to pay for sullying their hunting grounds, and I had paid it many times.

I was dancing on top of the risers. You just never see fat people on those risers and I was ready to change that and create some fat visibility. The sparkly fat babe (unbeknownst to her) and this other cute fat boy off to the side of the dancefloor had actually emboldened me to do it. Just knowing the two of them were there — knowing we likely shared some experiences since all three of us were living under a fatphobic reign of terror and all — was enough to make me feel more comfortable. My friend had told me that the fat boy was always taking care of other people, always carried extra water and checked up on people. I wondered about these acts of service. Did he feel he had to show his worth by carrying extra stuff with him all the time? I wondered if maybe his back might hurt from carrying all that water around just in case someone else needed it. I know these gestures of self-sacrifice well. I wanted to touch that back, let him know it was precious.

I remember how excited I was when I turned 21 — finally old enough to become part of a glamorous and fabled American ritual that I'd seen play out on tv and movie screens my whole life. I had reached clubbing age. It took hours for me to get ready that first night out. I did my makeup and carefully chose an outfit that made me feel sexy. I thought I would be like Carrie Bradshaw, walking into a glamorous and vibrating spot, a space to flirt and maybe meet someone special. It turns out that's not how it usually pans out when you're fat.

My not-so-great reverie was interrupted by the behavior of the people around my sparkly crush. Who were those shitty people she was with? The men in the group kept hitting and pushing each other trying to dance closer to her smaller friend, doing increasingly stranger things to get her further from the group. I recognized their herding behavior as a product of their socialization into rape culture. And I also recognized the smaller friend's giddiness and pride as a learned emotional response that stems from the misinterpretation of this terrifyingly misogynist behavior as a coveted prize.

I sent up a prayer: "Please let it be that she just met these knuckleheads and then quickly realized they were poop garbage and will never see them again. Amen."

I wanted to swoop her up, bring her up there with me on the risers where we both belong. High priestesses who have seen so much and become magic because of it.

On several occasions I too had found myself caught up in the kind of bullshit I suspected she was in the middle of - a band of vulturous straight men descending upon my friends, casting me as the enemy (enemy to them, enemy to my friend's chance at being with them), some kind of road block to one of my thinner or blonder companions. I remember on one occasion I pulled my (thinner, blonder) friend aside and told her that I thought the men who were surrounding her were acting in an assaulty way that scared me, asking her if we could leave. She defended their behavior, told me I was being a bad sport and that I shouldn't have come to a party if I wasn't interested in men being aggressive. I was 20 years old. She told me later that not long after she chided me they proceeded to take turns groping her while photographing each other, like she was a prize deer. A dead one. A few more nights out like that had me completely cured of any desire to experience night life ever again.

In the intervening years I'd been out dancing — most recently at this little club that doubled as a wings place in a strip mall in Tenneesee with my friend Mel during my most recent birthday trip to Dollywood. And I'd definitely danced (safely, jubilantly) on the hallowed grounds of El Rio and The Stud many times. But this place reminded me of the places where I'd come face to face with the harsh reality that this part of the culture (like many) wasn't designed for me.

The only reason I was at this club on this day was because my good friend wanted to see a DJ she loved, and I wanted to be by her side while she experienced this thing that mattered to her. It was not without hesitation, but I brought with me a new understanding of what I wanted and needed to get out of this experience.

I wanted to dance.
I didn't want to meet men.
I needed to go with a friend I trusted.
And I needed to be able to leave when I wanted.

I don't think I'll be returning to that club anytime soon, but that sparkly fat babe really made my day. Just seeing her out on the dance floor, getting down so hard filled my heart up with joy. I hope she always dances like no one is watching forever.

The impact she had on me speaks to the lack of fat people's presence in public spaces like these — where we're sweating and having fun. When we're not in a place, usually it's because it's not safe for us to be there. And it speaks to the extraordinary power and impact that one human can have in a room full of people. I didn't have to know her or speak to her in order to feel love for and kinship with her.

She held me without even knowing it. And maybe — in some small way — I held her too.

If you like this article, please share it! Your clicks keep us alive!
Tags
Virgie Tovar
take the cake
dancing
fat positive
Body Positive
body image