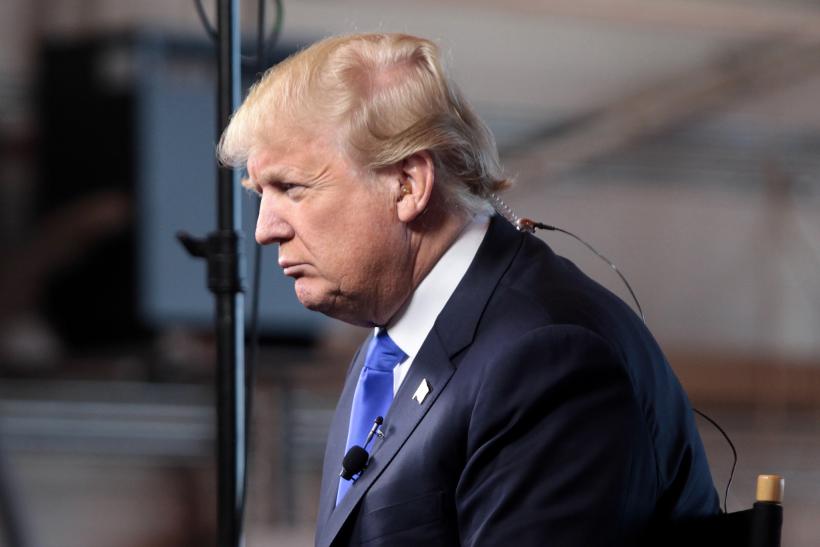 Our rundown of all the major players in the Trump-Russia-Comey scandal. In short: It's a bad day for Trump, but a really great day for democracy in America. (Image Credit: Flickr/Gage Skidmore)

News ranging from the nonsensical to the marrow-deep disturbing has been emanating from the Trumpian White House since Day One. It's easy (and fun!) to get lost in laughing at the Sean Spicer-loves-bush memes, the alternative universe of Kellyanne Conway, the radioactive incompetency of Stephen Miller. We're guilty of yucking it up ourselves.

But the reality of a White House enmeshed with a foreign power that is in no way supportive (AT ALL) of democracy, liberalism, human rights, et al. — this is new and frightening territory.

And for those of you who KNOW something up in D.C. is rotting, but are shaky on all the facts, players, and timeline of why Trump is in deep doo-doo surrounding his administration's ties to Russia, the FBI's involvement, what happened to James Comey, holy hell CONNECT THESE DOTS ALREADY, let me just say: we got you.

Donald J. Trump, the presidential candidate, hired staff who were tied to Russia. Most notably, his first campaign manager, Paul Manafort, was not only a foreign lobbyist for Russia (he promised to "influence politics, business dealings and news coverage inside the United States, Europe, and former Soviet republics to benefit President Vladimir Putin’s government"), but he failed to disclose his previous position. And that's a crime, in and of itself. 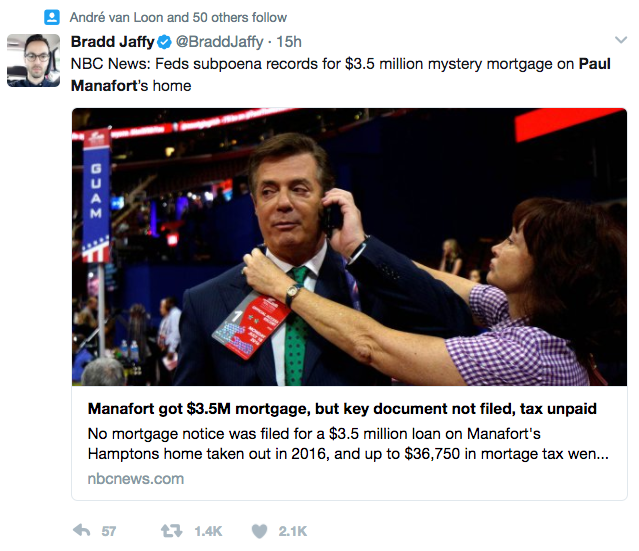 Flynn was named by Trump as National Security Adviser. But he was also working to help an authoritarian regime, in this case that of Turkey's increasingly undemocratic Recep Tayyip Erdogan. Flynn did not reveal that lobbying work to Trump, nor did he disclose to the Justice Department the hundreds of thousands of dollars he was collecting from the Turkish government to move American policy in their favor.

After revealing classified information to Russian officials, Flynn was "asked for his resignation," allegedly for lying to Vice President Pence about it. But that kerfuffle was back in February, and the latest revelations from James Comey's memos suggest something more might have been afoot with Flynn. 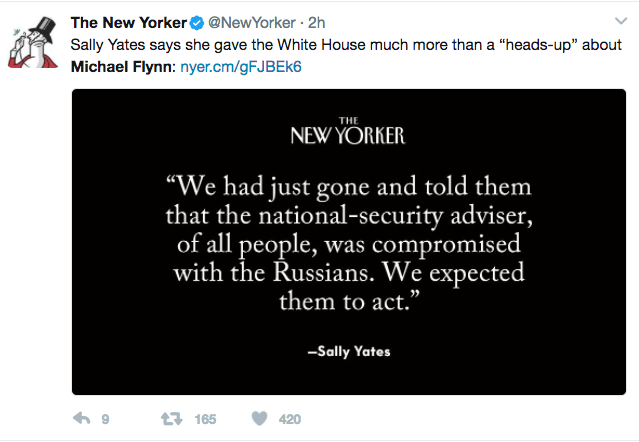 Which brings us to...

The former FBI director has a conflicted history with both Rs and Ds. But nearly four months after Trump's inauguration, it looked like Comey had won enough presidential favor to keep his job.

Instead, Trump summarily fired Comey last week. First, he claimed it was because Deputy Attorney General Rod Rosenstein had so suggested. But since Rosenstein faulted Comey for publicly reopening the investigation into Hillary Clinton's emails — a move which many believe handed the victory to Trump — such reasoning made no sense. Trump himself declared as much in two interviews, saying he would have "fired Comey anyway."

There is much speculation that Comey was actually fired because he was leading an investigation into the ties between Trump's team and Russia.

Trump later threatened Comey on Twitter, but that's kinda par for the course for anyone who falls out of Trump's good graces (if there exists such a thang).

As of yesterday, new memos show Trump actually asked Comey to lay off the Michael Flynn investigation (remember him from #2?). That would be an egregious abuse of power.

Translation: Looks like maybe The Don is trying to hide the fact that he's a vodka-drinking Russophile.

He told Comey (and I QUOTE), "I hope you can let this go"

But hey! At least he's finally reading the constitution?

Oh yeah, him. President Trump has long expressed a bizarre affinity for many things Russian, including Russian president Vladimir Putin. There is a backstory here that involves a trip Trump took in the 1980s to the former U.S.S.R. and his decision thereafter to view the whole U.S.-Europe allyship as something of a missed opportunity to “negotiate” with the Communist bloc.

Of course, Trump also hosted his Miss Universe pageant in Moscow, which gave the world its first glimpse of Trump’s strange attraction to Putin in a tweet asking, inexplicably, if the Russian president would be his “new best friend.”

Trump wants to “get along” with Russia. Does “getting along” involve shady and possibly compromising business dealing and recorded hotel romps with prostitutes? Nothing has yet been proven, but there seems to be growing evidence that something afoul is definitely up between the POTUS and the Kremlin. (For further evidence, please reference Players 1 – 3 and 5 – 7.)

Also, the day after firing Comey, Trump hosted Russian Foreign Minister Sergei Lavrov and Ambassador Sergey Kislyak in the Oval Office, and allowed photography by the Russian side, but not any Americans. It was a move so brazen that expert on authoritarianism Sarah Kendzior called it a tell-tale sign of an increasingly confident strongman.

Translation: Why does Trump have heart eyes for Russia 4ever? Is it the skill with which they execute potato fermentation?

Donald, do you remember the Cold War? Stalin? Nuclear warfare?

Any of this ringing a bell?

How quickly we forget the 45 years of power struggle between us and Roooo-si-a. 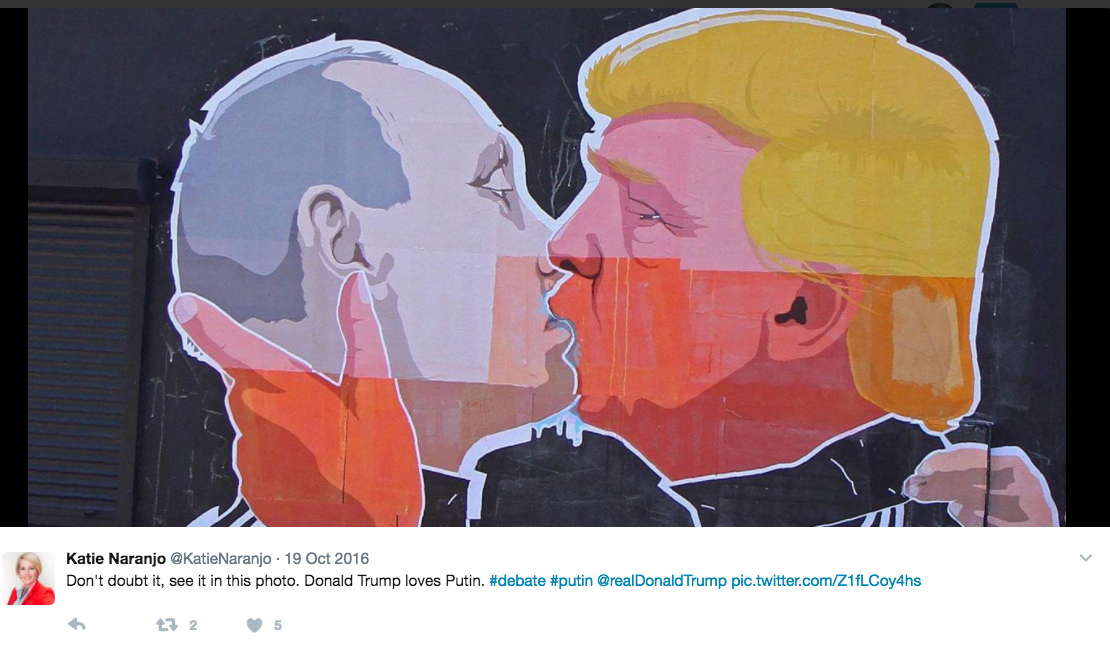 Sergey Kislyak is Moscow’s ambassador to the U.S., and is tangentially responsible for both the ousting of Flynn and the recusal of Attorney General Jeff Sessions from the Russia investigation. Flynn told Kislyak that sanctions on Russia might be lifted, before Trump actually took office. Sessions met privately with Kislyak, “forgot” about it during his Senate testimony, and thus had to take himself out of the FBI investigation into Trump’s Russia ties.

Sergei Lavrov was in the room, along with Kislyak, when Trump revealed espionage intelligence on the war against ISIS, intel that he apparently didn’t know was secret information. And by the way, the partner who gave us that information was Israel. And they might be less willing to share their hard-won secrets with us in the future, since Trump seems willing to unwittingly hand it over to foreign powers not really aligned with them.

What part of CLASSIFIED DO YOU NOT UNDERSTAND? 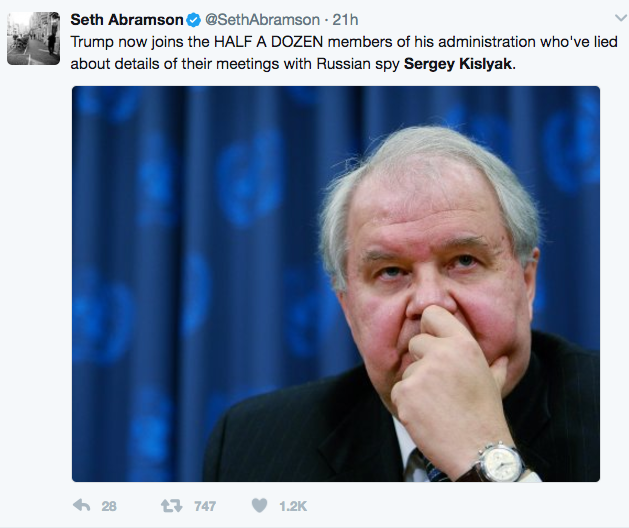 Sessions, as mentioned above, did not disclose his meetings with Kislyak during his Senate confirmation hearing. As such, he has since had to recuse himself from the FBI investigation into the Russian scandal.

However, he did second his deputy AG’s recommendation that Trump fire Comey. Hmm…

Translation: Recuse = excuse oneself from a case because of a possible conflict of interest or lack of impartiality.

What's that you say? Conflict of interest? Lack of impartiality?

That Russia tried to influence the presidential election is not up for debate. They did, and it worked, probably better than Putin could have imagined. The Russian president is pursuing a strategy of disinformation in elections throughout the western world, and it’s so far been very effective. The goal is to get a voting populace to doubt the veracity of their own news, the rightness of their own institutions, and the goodness of democracy itself. The medium is often “fake news.”

Putin wants nothing to do with western-style liberalism. He punishes homosexuals, jails dissidents and regime opponents, and some of his political opposition have been flat-out killed.

This is the guy Trump wants to be “best friends” with. The is the guys who wants to see the U.S. and western Europe, with their liberal ideas about human rights and democracy, greatly diminished.

This is the guy who may have infiltrated the highest levels of American power.

Translation: Putin is a homophobe and generally super rude.

Trump really should be impeached.

Trump really never should have been elected.

Do you remember this fellow? He's the chairman of the House Oversight Committee, a Utah Republican with a baby face and penchant for being super lax about GOP conflicts of interest...

Or so we thought! But as of Tuesday, Chaffetz has requested that ALL Comey memos related to conversations with Trump be turned over to the House for their immediate perusal. It could be that Chaffetz is not running for reelection, and is therefore unshackled by the pressures thereof, or it could be a sudden swing towards country over party...

Whatever the case, it's no small matter that Chaffetz wants to see these FBI docs. After all, the House Judiciary Committee (HJC) is where impeachment proceedings begin.

Translation: QUICK! MORMON TO THE RESCUE! 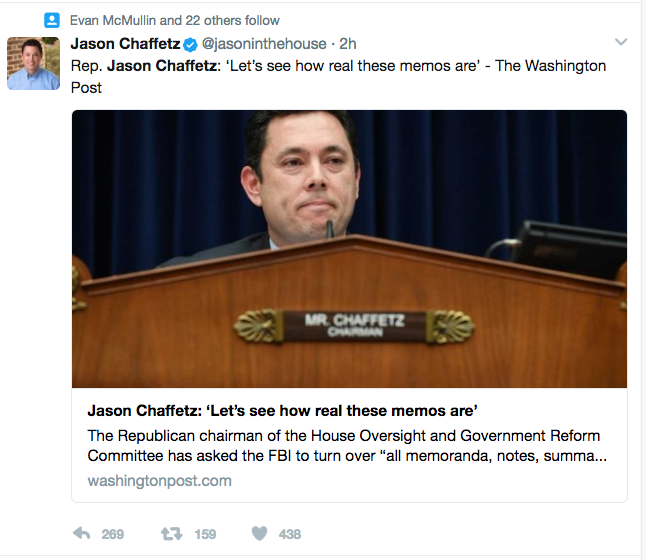 If you like this article, please share it! Your clicks keep us alive!
Tags
Trump
Comey
Russia
Putin
scandal
impeachment
Kislyak
Manafort
Flynn
Speech to joint sessions of Congress