What Should A Custody Exchange Look Like? 10 Ways To More Peace 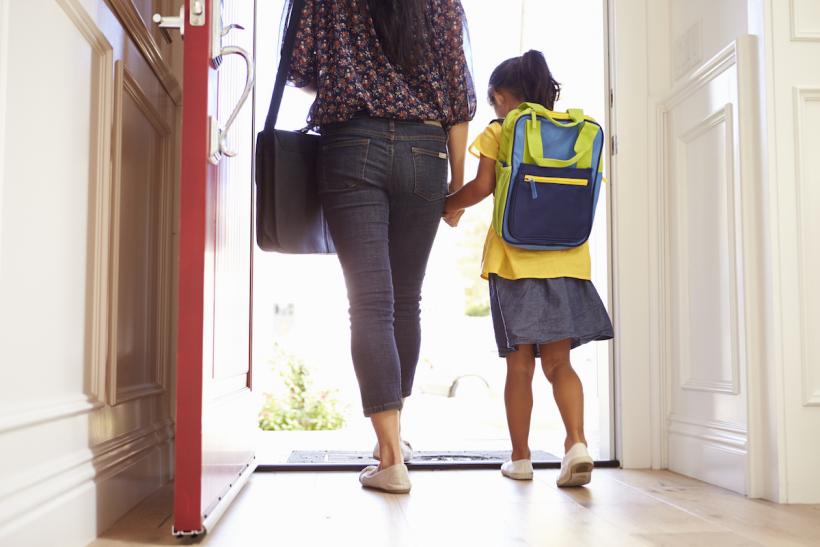 Visitation exchanges need not be police matters or events that create patterns of family dysfunction in the children we love.

I watched out the window in anticipation of the scene about to unfold before me. A car screeched around the corner and hastily parked as four kids spilled out into the parking lot. The youngest was shoeless and shirtless as he staggered across the hot asphalt with traces of colorful sweets smeared across his lips. The father, who was receiving the children for visitation, stepped outside his front door with a stupefied shrug directed at his ex to indicate his confusion about the child’s missing clothing and yelled over the rumble of his ex’s car engine “Where’s his shoes? Do the kids have their bags?”

His ex-wife shot him a glare as she shooed children out of the vehicle; but, otherwise ignored his inquiry, causing him to walk toward her car and repeat the question. As he neared her window to again ask about his little boy’s missing shoes, she put her foot on the gas and tore out of the parking lot, nearly running him over in her exit.

Like clockwork, every Sunday I watch a dysfunctional display of visitation exchanges courtesy of my neighbors. This family has acted out every imaginable high-conflict scenario including the police being called to referee disputes, mom and dad screaming and yelling, objects being thrown at (or out of) vehicles, one parent refusing to talk to the other at exchange time, attempts at vehicular manslaughter, kids dropped off past the exchange time, and kids have been dropped off when the other parent had no idea to expect them.

We might find ourselves easily captivated by the volume and antics of the “adults” involved in this matter; however, we must try to imagine what this does to the children involved who will grow up thinking that it’s acceptable for adults to scream through their disagreements, that it’s normal to have police involved in family business on at least a monthly basis, and reasonable to treat others with poor communication or respect.

This, then, begs the question: what should a custody exchange look like and how do co-parents manage to keep them peaceful and productive?

An exchange is unique to each individual family depending on their parenting plan and situation. The most important thing you can do is be very familiar with your court orders and follow what they say pertaining to the times, locations, and days of exchanges.

Your plan may even specify that if one parent is late that they forfeit their visitation time. We all know that things can happen to make us late (e.g. traffic, getting the kids ready, and soon); but, when you’re tardy, it’s a sign of disrespect and can start interactions off on the wrong foot.

As kids get older, they can start to become more responsible for their own property; but, as the parent, it’s ultimately our responsibility to make sure that children transition with everything they will need for their time with the other parent including shoes, coat, school bag, equipment for extra-curricular activities, and so on. Parents will have to work out the details of such items as medication and specialty supplies. Sending kids without what they need is a sure way to start a conflict, and about guarantees follow-up contact to obtain the items!

If you have something to say to your ex, text, call, or get out of the car and ask them yourself! Asking a child to hand dad an envelope when she gets in his car isn’t that big of a deal; however, do not pass along messages such as “tell your dad that if he doesn’t like... he can shove it!” through your child! It’s also not appropriate to negotiate, argue, or insult through your child!

Related: Heard Of A Parenting Prenup? Here’s Why Couples With Kids Should Consider One

We get that you and your ex have issues with getting along, but children are not the right audience to wage war before! It frightens, angers, and makes children sad to see their parents fight, and sets a terrible example for them of how to handle conflict, interact with people we don’t care for, and solve problems! Unless you want your kids to think that yelling, screaming, and physical aggression are relationship goals, it’s time to pull the plug on the animosity!

Let your ex know if you’re running late, if you have something to give them at the exchange, or if you need to chat for a moment. When you already have a tenuous relationship, surprises may trigger hostility; so, be transparent, amicable, and err on the side of communicating too much as opposed to not enough!

There’s no guarantee that being nice, playing by the rules, and fulfilling your obligations will change the way your ex conducts his or her parenting business; however, it is often the case that when one person is treated with respect, the other is more likely to follow suit. Even if your ex never changes their stripes, at least it can be said (and witnessed by your children) that youwere a civil and decent person who practiced reasonable behavior and followed the court orders!

8. Set yourself up for success!

If you fear meeting at your or your ex’s home for exchanges, then designate a neutral and public location for drop-offs and pick-ups. My parenting plan designates that my ex and I must meet exactly halfway between our two homes, and that location happens to be the parking lot of a bank. It is safe, well-lit, there is a camera on the premises, and it is located right on a main route. We have conducted exchanges at either of our homes; but, our primary location is non-threatening and equally advantageous to both of us.

9. Limit the involvement of secondary players.

Unless your arrangement is very peaceful and accepting, the presence of new partners, friends, and other family may be cause for trouble. The mere presence of another may make your ex feel ganged up on and outnumbered; but, if everyone is calm and appropriate, it’s not necessarily a problem. Do not include anyone who will fan the flames of conflict with rude comments or looks, or for ulterior motives, such as making your ex jealous or trying to make them feel threatened.

10. Don’t say everything you’re thinking in front of the kids!

Even if you and your ex don’t fight at exchanges, you may not be exactly “friends.” Keep your commentary about his car, his new girlfriend, how late he is, and everything else negative you wish you could spill to yourself! Children love both of their parents and are hurt by derogatory comments about their other parent, who is half of who they are!

Visitation exchanges need not be police matters or events that create patterns of family dysfunction in the children we love. Although they might never become a time we look forward to, they can still be peaceful. Most importantly, exchanges can serve their intended function: to transfer kids from home-to-home, if we all just follow our orders of the court and remove emotion from the equation. With work, even an exchange can be bearable!

If you like this article, please share it! Your clicks keep us alive!
Tags
divorced moms
single parenting
co-parenting
divorce and kids
custody
divorce