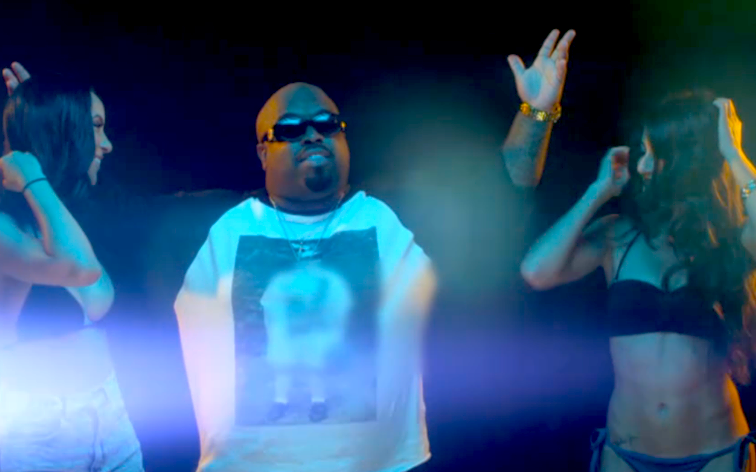 Celebrities sure say some dumb things. In the case of CeeLo Green (lead singer of Gnarls Barkley, solo performer and former crappy reality TV show judge), the word "dumb" does little justice to his offensive tweets regarding an alleged rape.

CeeLo drugged his (female) date's drink back in 2012. Allegedly, she woke up naked next to him unsure of what had happened the previous night. Though CeeLo admitted to slipping ecstasy into his companion's cocktail without her consent, he pleaded "no contest" to rape accusations. His lawyer maintains that all contact was consensual. Sexual assault charges were not filed; CeeLo got community service, which is basically a stinking face-slap to every rape victim from here to Kingdom Come.

Rather than quietly accepting the offensive privileges of his celebdom and skulking off the proverbial screen for a while, CeeLo took to Twitter to defend himself; not too surprisingly, the deluge of outrage his comments caused forced the singer to delete his account . . . briefly. CeeLo has since re-entered the social stratosphere, although the previous, rape-A-OK tweets have been subsequently deleted.

But because this is 2014, everyone and their mother took screenshots of said tweets and Buzzfeed has happily shared CeeLo's sickening justifications for what transpired. Among the other fist-inducing tweets were these gleaming gems of terrifying garbage. (And yes, this impressively illiterate grammar is all CeeLo.) Cheers.

"if someone is passed out they're not even WITH you consciously! so WITH Implies consent."

"so if I TRIED but did NOT succeed but the person said I DID then what really happened?"

"women who have really been raped REMEMBER!!!"

Clearly CeeLo wouldn't pass fifth-grade English or an eighth-grade Debate class, but we'll continue. Not all of these "arguments" make too much sense. Take the first one for example. Is he saying that behaving sexually with an unconscious individual is wrong? "They're not even WITH you consciously." Or, is he saying the opposite? "WITH implies consent." Is being in the same sleep proximity giving the green light to drug-induced love-making? I often ride on the public transportation WITH people, does that mean it's fair game to spike my Orangina with ecstasy and fornicate with my semi-prone body?

The multiple levels of wrongness here are kind of staggering and provide a chilling peek into his twisted justifications for his behavior . . . an impulse that many of us manifest on a regular basis.

We know certain things we do are fundamentally bad—amoral, damaging to others—but we don't like to think that we are bad. For instance: aside from Robin Hood enthusiasts, we can all agree that stealing is wrong. Yet, how many of us have downloaded free movies and music illegally? Technically, that is stealing. No matter how you justify it ("Rihanna doesn't need more money," "The music industry is corrupt," "I'm a poor starving artist," etc., etc., etc.) you are engaging in behavior deemed morally wrong. Your brain is conflicted with itself and justification is how it reconciles this internal fight.

The more-than-troubling problem here is that while illegally downloading music is shady and illegal it doesn't cause physical or emotional harm; on the archetypal hierarchy of good and evil, it's pretty low on the totem pole. The notion that "everybody's doing it" provides ample feelings of justification. "If it was that wrong, we wouldn't all be participating in it, right?" (I think we can all see how fallacious that reasoning is.)

Justifying rape however is pretty damn high on the "evil list" and with a celebrity's stamp of approval, hundreds of thousands (if not millions) of people will read his words and very well follow suite, even subconsciously. When dangerous ideas are widely proffered, dangerous actions may shortly follow. How many people walked away agreeing with CeeLo? How many young men and women will accept these rationalizations and believe that date rape isn't that bad?

While the victims of date rape may not have the platform or platform records of CeeLo Green, they should be trusted as a more reputable source of information on the topic, and we're pretty sure they'd you tell you rape is that bad.