FYI: The Male Honey Bee's Ejaculation Is So Strong, Humans Can Hear It 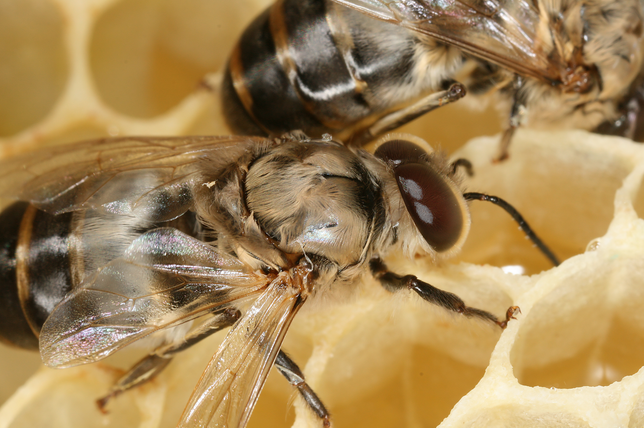 Sex is crazy you guys. From penis-fencing flatworms to the frantic love-dance of the Birds of Paradise to the beast with two backs we're all so busy making . . . it truly is a kaleidoscope of wow-inducing wonder.

In the spirit of celebrating the peculiar pantheon of sexual experiences that glut our good Earth, let us turn to the drone—the male honey bee.

Drones develop from unfertilized eggs layed by the aptly named "laying worker bees"; drones cannot sting and they don't get up to any other readily recognized "bee behavior" like nectar and pollen gathering, nursing or hive construction. Oh no. These (sort of) lucky bastards exist solely to get. it. on. with a virgin queen.

Drones gather at "congregation areas" or mating sites, hailing from all different hives—sometimes gathering in numbers as large as 25,000. The queen bee mates with several drones during her mid-air, orgiastic copulation sesh; this ensures her female offspring will have multiple fathers with a variety of genetic origins. Incest, as it turns out, ain't even smiled upon by bees.

(As a fascinating sidenote, there is still raging controversy about how these drones know where to gather at said "sites." As their life expectancy is only 90 days, the fact that some sites have been used for bee boning for more than 12 years has spurned a host of theories not yet nailed down.)

What is known, however, is that the drones locate the virgin queen using visual and olfactory cues. Once the scent is sniffed, it's a feverish fight to penetrate her. Often called a "drone comet," the swarm of hopped-up potential humpers chase the queen bee through the air; only 1 in 1,000, however, will successfully sex her up. While a drone's mating flight typically lasts about 30 minutes, the actual penetration/insemination can be over in mere seconds. Here's hoping that scenario doesn't sound too familiar.

But let's get to the good part shall we?

The drone penis—which only emerges when mating—is specially designed to disperse an impressively large load of semen with tremendous speed and force. This is achieved through the contraction of abdominal muscles, which basically "inflates" the penis via pressure.

As the drones have to penetrate mid-flight, their penises also boast "claspers" at their base to help grip the queen. Once gripped, he straddles her, his thorax poised above her abdomen. He then grabs that minx with all six legs, everts his tricky endophallus, and tries desperately to ejaculate into her opened "sting chamber." As the penis is everted, the drone becomes paralyzed and does a backflip—you can't make this shit up—as he ejaculates.

And yes, the drone ejaculation is so damn powerful, the semen "blast" possesses such force, that it's audible to the human ear; apparently bee semen bursting into an oviduct sounds like a "pop!"

Oh, this little exchange also explodes the penis entirely. Or rather, it "ruptures" it from the drone's body, allowing it to remain inside the queen's vagina.

But fret not. This "mating sign" does prevent further penetration from other drones, rather just the prevention of semen loss.