Confession: An Intruder Ruined My Date 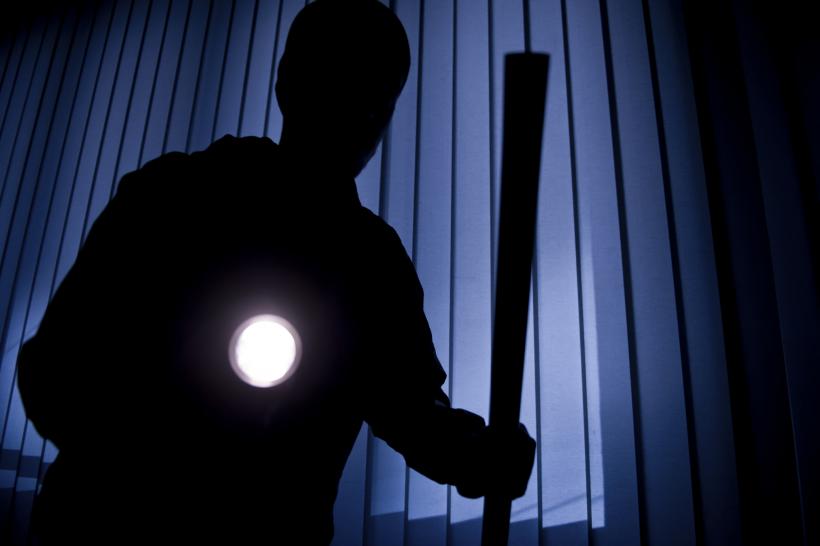 This would be Ben, not the intruder. Courtesy of ThinkStock

It all started as that type of date that would make rom-com fanatics say “aw,” and cynics say, “damn, that guy wanted to get laid.” *Ben—a handsome man who shared my love of classic rock—had invited me out for our third date. Despite the oppressive heat our college town bestowed upon us in the summer months, we decided to do a picnic in the park (read: Drink lots of wine and engage in gratuitous make-out sessions).

Amidst the conversation about music, my hair, his hair and hobbies, night began to fall. And then the sprinklers came on. Clue #1 that this was going to be a weird night? I pretended that I was cool with my bag getting water-logged by the sprinklers, but inside I was fuming. Did Ben not see my designer purse? How come he was staring at my face instead of his watch to prevent the wreckage of such a valuable item? Bastard.

In the depths of my shallow heart, I found that I could forgive him. So we took the date from the park back to his place. It was the summer before our senior year of college and Ben lived in a fraternity house. While the house itself was large enough for some pant-dropping privacy (especially in the summer), the property also had a few (teeny) apartments detached from the main structure. And Ben lived in the one farthest from the big house. This meant that we could have sex as loudly as we wanted. Win.

Or so I thought.

Following our literal hot and sweaty sex, Ben and I collapsed on top of the covers. Between the summer wind and our post-coital heat, the notion of physical contact was unbearable. I laid on my back and tried to spread my limbs as far apart as humanly possible to minimize the possibility of increasing my temperature. I could feel my sweat-soaked hair sticking out at every angle, like Angelica’s doll from Rugrats. Somehow, we both managed to fall asleep.

Around 3:30 AM, a loud noise woke us. A man—with a surprising amount of energy given the hour—burst into Ben’s room. I was startled, but not panicked: Ben lived in a frat house; drunk friends did that.

The guy ran around the room, like a massive, deep-voiced Tinkerbell, until Ben said something that scared me:

"You need to leave.”

Then I was scared. I screamed and threw blankets over my spread-eagle body. You know, as if the fabric were impenetrable armor.

“Nah, man. Don’t be like that!” the intruder began. “Oh shit!” he continued, as if he and Ben were old friends, “you’ve got a girlfriend in here?!”

Now this was personal. Who the fuck was this guy, and who did he think he was rushing Ben and me on our third date? I was so mad that I almost sprang out of bed to launch some undoubtedly shrill speech about how I didn’t believe in titles, or whatever nonsense I was spewing that summer. The one thing that stopped me was the fact that I didn’t want the intruder to see my boobs. They were too good for his undoubtedly judgy eyes.

Luckily, Ben had a better plan. He calmly asked the intruder to leave. The guy then mocked Ben’s ability “to rally.” Ben managed to prevent that massive ego blow from offending him. Instead, he blocked my quivering frame and repeated the request.

And again, the intruder insisted that he stay and we party. I mean, really?

"Sure, intruding stranger! Let’s party! I’ll throw on some clothes and take a couple shots with you! We can all laugh later after this experience turns the three of us into besties! I wasn't sound asleep 4 minutes ago. This is an excellent fucking plan."

Needless to say, Ben had a different idea. He grabbed a golf club from a set sitting near his bed, stood and faced the intruder.

“You need to leave now,” Ben said in (what I thought was) a pretty scary voice.

“DON’T FUCKING BE LIKE THAT MAN!” the intruder shouted back.

Time stood still. Frozen, I watched Ben push the guy out of his room. I felt utterly lame and powerless. Their scuffles rained on my ears while I laid, motionless. Then, they were outside.

You’d think that I would have gotten it together and rushed to Ben's aid, but instead I lay there still thinking that Ben would be back any second. After what felt like an eternity—probably about two minutes—it occurred to me that Ben . . . might . . . not . . . be . . . coming . . . back.

“Ben?” I whispered, as if he could hear me. Suddenly I sprang out of bed. Should I call 911? I couldn’t find my phone. By this point, I was pretty sure one dude would kill the other. If Ben died, there would be no fourth date! I’d be forced to live with the fact that I got outrageously (albeit, silently) furious at him for allowing the sprinklers to douse my purse. If the intruder died, would Ben make me hide the body? I couldn't handle that! Plus, I was still naked.

Why was I an awful human?!

On the floor lay my crumpled dress. Shaking, I slipped into it—sans undergarments. The zipper was temperamental to begin with, and my trembling fingers were no match. And it was strapless. Because, you know, nothing could be easy that night. The dress sat on me the best it could. I grabbed the biggest golf club I saw. Insider’s tip? That's the driver. Which is also the lightest. For a petrified, skinny, girl with virtually no upper body strength, this was possibly the worst available weapon. Not only did I not know what I was doing, but a surprise attack would likely feel like a firm massage. Not my goal.

I took a few practice swings, whimpered, then tried a few more. My dress fell when I swung. The intruder who didn’t deserve to see my glorious globes could potentially catch a glimpse . . . as well as anyone else wandering about the property around 3:45 AM. My matted hair wouldn’t hide anything.

Fuck it, I thought. It didn’t matter. I was newly minted warrior lady, and I was going to use that light-as-hell golf club to defend my new friend.

After gathering up my courage, I walked into the hot night, club poised high. Turns out, I didn't have too far to go. Two steps into my journey, Ben came around the corner.

“Ben?!?!” I mewl-whispered, not convinced that he wasn’t a hallucination. Ben said my name back.

“Bennnnnn,” I cried, still holding the club in defense mode. I sounded like a piglet and looked like a hobo cave-woman who'd just stumbled from a time machine. In a move that made me question Ben’s aesthetic standards in women, he embraced me tightly and began kissing my face. My knees buckled and I cried. Briefly his eyes surveyed my weapon of choice with surprise, but he didn’t comment. Sweet nothings were whispered. Ben explained that he convinced the man to leave without resorting to violence. The intruder was high or experiencing a manic episode, but he didn’t want to harm us. We never did find out who he was. Just that he wanted to party.

The quintessential “THANK GOD WE’RE ALIVE!” rush followed that moment. Passion, kisses, a proclamation of feelings and horniness followed. I was too scared to get naked. So I decided only Ben had to get naked, and I went down on him. Seemed fair. Neither of us could sleep, and we didn’t know each other well. I spent most of the night staring at the ceiling contemplating the night. Ben had put some genuine effort into our date that evening, so I felt bad that it had ended this way.

For reasons of sheer incompatibility, Ben and I didn’t continue our rendezvous much longer after that night. So he remains, in my brain, forever as that man who showed me the strangest third date of all time. While I felt sorry for Ben then, now it’s a hilarious story that comes out during girl-time confessions of weird dates. “No bitches, let me tell you about a date,” I begin. And I win. Repeatedly.

*Name has definitely been changed.