Why Women Should Get Angrier: The Tremendous Value Of Being Pissed Off 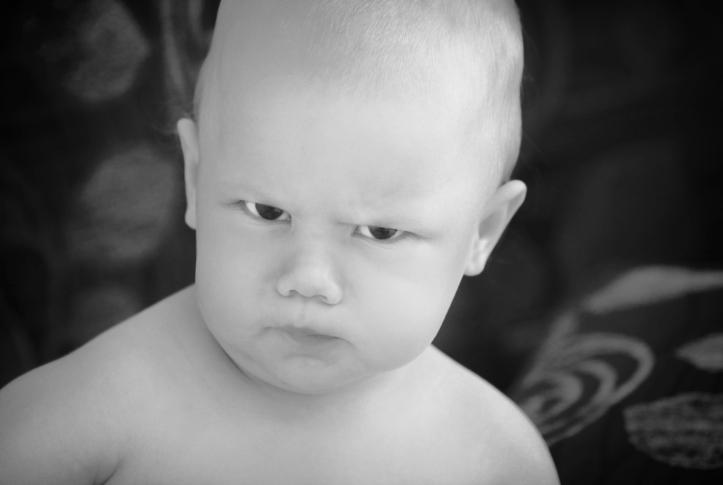 This baby gets it. Credit: Thinkstock

Contrary to how some esteemed Internet commenters have described me, in disposition I’m actually less like a “sociopathic, self-obsessed reptile” and more like a yellow lab. Though I completely lack a passion for chasing tennis balls, I am amiable, generally easy-going, and get pretty excited about, well, lots of things. Airplane food containers. Midwest accents. Small turtles. Large turtles. In fact there’s a video of me literally jumping up and down in glee upon the discovery of a blender in a hotel—and I don’t even like smoothies.

But this isn’t to say I don’t also get angry. Or—and this might surprise some who know me as an emblem of exuberance—that I don’t embrace that emotion and its incredible inherent value.

Because let me be explicit here: Getting pissed off is important. And people, who are more often than not women, don’t embrace it nearly enough—to our own great detriment.

Where does my passion come from? Well, in part, it’s rooted in a basic acceptance of biology. Anger is a human emotion. It happens. We get ticked off. And that chest tightening, blood-boiling, forearm tingling sensation isn’t like the appendix: It exists for a reason—it’s designed to help guide and serve us.

When, say, someone punches us in the face and then we get upset, does this not make sense? Being punched empirically sucks. It would be weird if we didn't have a negative reaction to this (unless, of course, we'd asked to be punched in the face). Similarly, if someone were to take something of ours, whether it be a delicious cookie or our right to reproductive health choices, and we got pissed, our body would send us a message that one of our boundaries had been violated. This is important information.

It’s sort of like when we touch a pot of boiling water and our brain sends a strong pain signal. It’s a friendly “BRO YOU’RE DOING LIFE WRONG AT THE MOMENT THIS CHOICE SUCKS AND ISN’T IN YOUR BEST INTEREST.” Science reminds us that humans are but beasts motivated by two major drives: moving toward the good shit, and keeping the hell away from the unpleasant shit. Anger helps us do that—but often with this ugly, unhelpful stigma attached to it that pot-related burning sensations don’t bear.

Where often men are told that anger is the only acceptable emotion to express (“c’mon don’t cry—be a man!”), women are bombarded by messages that we should be “nice” and cater to the relationships in our lives. We often don’t feel entitled to our own biological signals, which is on the list of things that piss me off. Because anger is a tool—and we’re being instructed to neglect it. Negative emotions signal that something is amiss, and that sense of “amiss-dom” is important for making decisions, establishing healthy boundaries and generally navigating the world successfully.

We can’t fucking lead healthy lives when we’re attempting to delude ourselves into believing shit is hunky dory when in reality, there are legitimate reasons for wanting to scream on a mountaintop or cry rage tears in a shower like you’re a protagonist in a movie on Lifetime.

This is not, to be clear, a sanctioning of aggression, which is an entirely different matter. You do not get a free pass to burn someone’s house down just because someone pissed you off (and you read a blog post that anger is healthy). Anger is an emotion that happens but it does not condone harm against others; it is a tool, like a hammer. A hammer is great for taking care of nails that jut out unsafely on porches—it can also kill someone.

So the first challenge? Owning your anger without shame or hesitation. It is yours and exists for a reason. The second challenge, however, is finding a way to communicate through it or channel it healthily. There is plenty to be angry about in this world. It's not just individual slights against us but greater systemic issues. Sexism, classism, poverty, racism—there are huge, devastating, infuriating, dehumanizing injustices out there. And we should not run from being pissed off about them or dig our heads in the sand because we have to be "nice."

I can’t ever be more eloquent or powerful as Audre Lorde (which, for the record, is not something I’m angry about—if we're identifying feelings, I would say I am grateful for her work), so I’ll leave you with her wise take:

“My response to racism is anger. I have lived with that anger, ignoring it, feeding upon it, learning to use it before it laid my visions to waste, for most of my life. Once I did it in silence, afraid of the weight. My fear of anger taught me nothing. Your fear of that anger will teach you nothing.”

So go out, ye wronged ones, and embrace your angst! It is yours, and, when recognized and embraced, makes you smarter and better armed to face the world.