Your Guide To Anti-Immigrant Groups In Europe 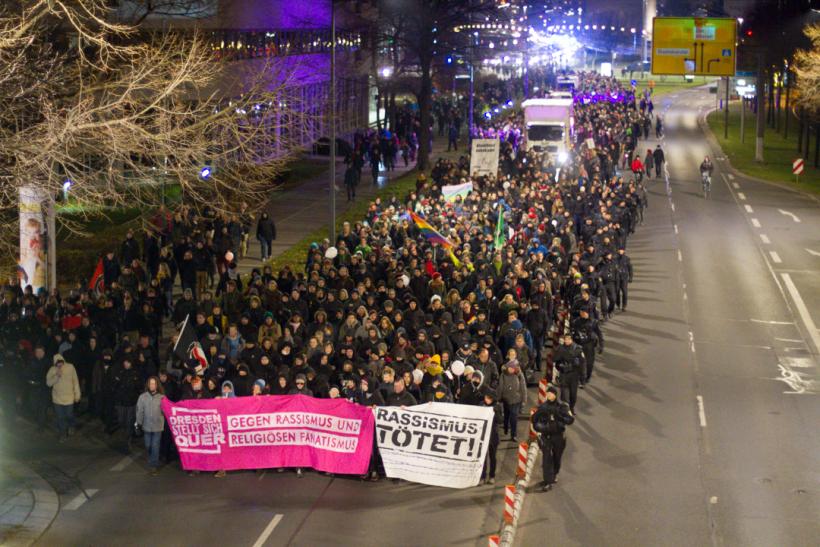 This month's terrorist attacks in Paris have cast a bright light on the darker, dirtier corners of European politics. While for the most part, Europe's a pretty chill place as far as this big, crazy world goes, hate is still alive and well within its borders, and when all was said and done in the days after the Charlie Hebdo shootings, the international community began to take a closer look at the nasty politics at play in Western Europe that might have contributed to the events of January 7th.

Modern-day Americans have kind of a skewed view of Western Europe—it's been a glamorous travel destination for the last several decades; kind of a cool, cosmopolitan yin to America's zany yang. Most of us imagine France as a laid-back country of rolling hillside, where people kick back and swill wine day in and day out. Even Germany, now that we're so many decades removed from WWII, conjures up images of hearty slaps-on-the-back in a cozy pub; fairytale forests, and busty women in braids.

But the reality is that, just like anywhere else in the world, there's unrest. And the recent Charlie Hebdo shootings have turned the rest of the world's attention to the conservative groups that deepened the divide between long-time residents and the recent immigrants that have been arriving in Europe in unprecedented numbers for the last decade or so, many of them Muslim. However, in the interest of fairness and avoiding fear-mongering, it’s important to consider the differences between them. For your education, let's take a look at the two biggest groups making the most anti-outsider noise in Western Europe right now.

PEGIDA stands for Patriotische Europäer gegen die Islamisierung des Abendlandes—in English, “Patriotic Europeans Against Islamization of the West." PEGIDA maintains strongholds of supporters in Frankfurt and Dresden, but its influence is beginning to spread to other major German cities.

PEGIDA is brand-new in terms of political groups, born in late 2014. Though early demonstrations only gathered a smattering of supporters, they now, three months later, attract crowds in the tens of thousands. In recent weeks, though, they’ve become careful to distance themselves from Neo-Nazi groups in the area, who support them on many of their causes (and yeah, self-identifying Nazis still exist in Germany, though thankfully in small numbers). There's no official membership, but PEGIDA rallies tend to draw crowds of around 20,000.

PEGIDA has taken up a regular schedule of Monday night demonstrations in Dresden. The good news is they're starting to be met with counter-protests everywhere they go—in a protest in Liepzig on Wednesday night, they were outnumbered by opponents. You also probably saw in your news feeds today that their leader resigned after Facebook comments calling immigrants “trash” and “scumbags,” as well as a photo of him seemingly dressed as Hitler, was unearthed by the press. So much for that whole “don’t call us Nazis” thing.

Whereas PEGIDA is an unofficial association of folks who share the same sentiments, National Front is an established political party in France that runs on similar conservative, anti-immigration ideals. National Front is run by Marine Le Pen, who had been mocked by Charlie Hebdo in the past and was tossed into the spotlight after the January 7th attacks.

Established in 1972 and long considered a fringe group, National Front has seen a meteoric rise to acceptance in the last three years, after Le Pen took the group over from her father and made an effort to downplay the party’s racist overtones (though make no mistake, they’re still considered the “extreme right” in France). Here's the difference between them and other extreme right-wing groups like PEGIDA: Though they’re both still dangerously hateful, National Front is a little more careful with their words. National Front’s beliefs aren’t outwardly racist, but like a lot of American conservative politics, the policies they espouse undermine and make life difficult immigrant groups in France: cuts to welfare, immigration restriction, zero-tolerance law enforcement—all wrapped up in a palatable cloak of patriotism. Sound familiar?

Though they're scarily popular with the general public (in late 2014, they were the second-largest political party in France), the group is in a little bit of flux right now, post Charlie Hebdo. In a move that's reminiscent of post-9/11 America, the French public seems to be siding with the established leaders—formerly-loathed president Francoise Hollande's approval rating swelled from 19 to 40% this month, leaving little room for National Front's anti-immigrant rhetoric. Le Pen, though leader of one of the largest political parties in France, also did not attend Paris’ unity march in the days after the attacks, claiming she was deliberately not invited due to her party’s beliefs. Currently, the group is busying themselves with courting youths to try and freshen up its image.