The Virtues Of A Lazy Marriage 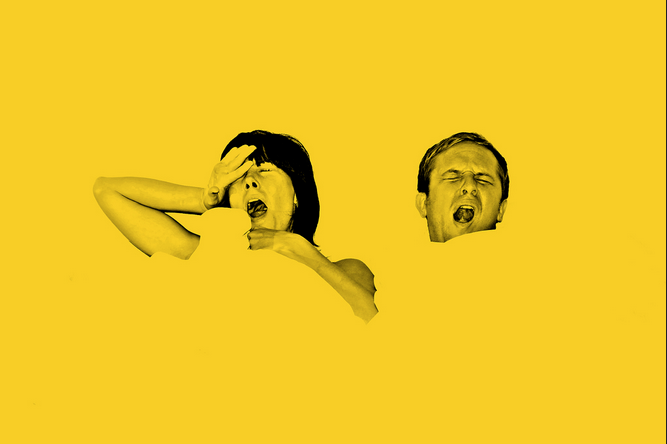 Every so often, I'll hear about a friend or acquaintance whose marriage has collapsed because of infidelity. And every time, I ask my wife the same question: Where on earth do these people find the time to have affairs, anyway?

I guess if you're really determined to be horrible to your partner and make yourself miserable, you can manage to find the resources, but that seems like it ends up calling into question some supposedly common wisdom. Namely that everybody always says that a marriage is something you have to work at.

But I wonder if people do a little too much work—marriage isn't a competitive sport, after all. Happily, you don't get graded on whether your house is spick and span, if you ever manage to actually cook a meal, ever, or even if you posses a scalding hot romance which reaches such a fever-pitch it sets the drapes on fire and makes the Siamese cat yowl and run for cover. Lower your standards, live in moderate amounts of filth, and go to bed early. The cat will thank you.

Admittedly, it's not quite true that no one will grade you. My son's teacher has told him that bringing the same snack to school everyday is not ideal, and maybe his parents could do better. My parents, for their part, are politely, mildly horrified by our approach to dinner, which usually involves one or the other of us saying at around 6:00, "Oh, crap, we have no dinner. Where should we order out?" When we went to Minneapolis on our vacation this year, friends, family (and even our own lovely 11-year-old) furrowed brows of varying bushiness and asked, "Minneapolis?" To which we replied that we'd thought of going to New York or Australia or somewhere more conventionally exciting, but organizing it had been too fatiguing. So we'd decided to just go somewhere in driving distance of Chicago. (Said explanation caused said brows to furrow further.)

Obviously, it would have been nice to go to New York or Australia—but Minneapolis was fun. There was a bookstore with a real honest-to-goodness pet chicken walking around, which made our son happy, because chickens are cute. It's really a lovely city—you should go (presuming you're in driving distance.) And it was a lot easier and less expensive than the alternatives. My wife had been working herself into a misery thinking about plane tickets and logistics; as soon as I said, let's just go to Minneapolis, it was like a giant airplane of tension just took flight into the beautiful blue, leaving her with a calm beatific oneness with the Midwest. I wouldn't say it saved our marriage, but it certainly made us both happier than we'd otherwise be. And if the child (despite the chicken) was slightly disappointed, well, he obviously should have chosen some other family to be a child in. He'll know better next time.

It's true that laziness won't do for every possible occasion. Someone, sometime does in fact need to go to the grocery store someday, bitter and painful as that realization is. The garbage has to be taken out; the child has to have clothes. Looming horribly on the horizon, you may have to take a nine-hour drive into the mountains of Kentucky in order to clean out your mother-in-law's old house and bring all the belongings back with you to Chicago. Agony and woe and the necessity of leaving the house—they'll get you, no matter how you hide your head under the covers.

That's kind of the point, though. Managing a relationship, and a family, certainly does take work, whether it's listening to each other or negotiating which of you poor souls has to go take the child to the birthday party—or, occasionally, and more somberly, how you're going to deal with illness, with failure, with sadness, and with death. But given all that work you have to do in the first place, it can be important not to make any more work for yourself than you have to.

Or to put it another way, one of the most important things you have to work at in a relationship is figuring out what you need to work at, and what you can, maybe, just not bother with. A good relationship isn't necessarily one in which you're both constantly striving for the best relationship possible  . . . while keeping the garbage cans empty too. Sometimes a good relationship can just be not doing much with someone you love. "Good enough" doesn't have to mean you've failed as a spouse. Sometimes it can just mean you've found the right person to be good enough with—at home or in Minneapolis, as the case may be.

If you like this article, please share it! Your clicks keep us alive!
Tags
marriage
working on relationships
marriage is compromise
infidelity
Relationships
raising children
virtues of a lazy marriage
stop working on your marriage
secret to successful marriage