Yes, I'm A Bearded Lady; No, I'm Not "Grateful" For Your Attention 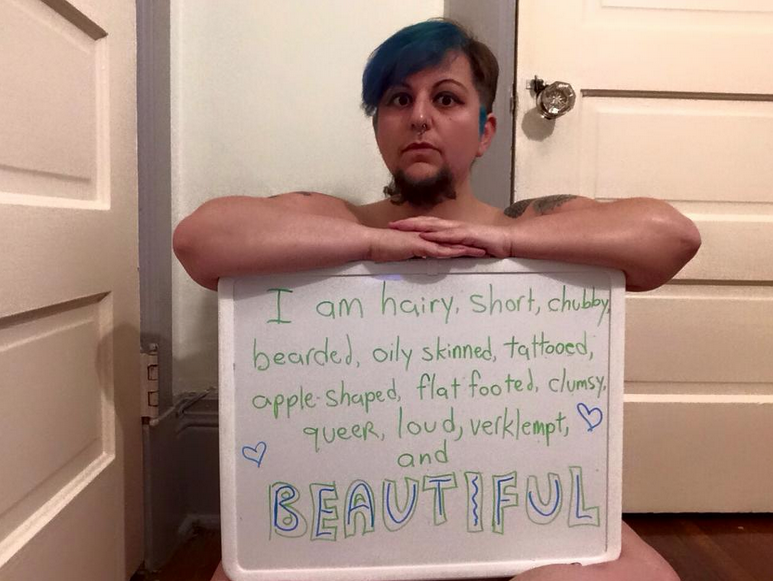 How do I begin to explain what is wrong with that statement?

How do I tell a generation of women, pumped full of conditioning that tells them—beauty is the rubric and romance is your reward—that there is no second place and there is no consolation prize when it comes to self-worth?

How do I convince you that turning down adverse advances is not unwarranted entitlement? That no one deserves settling for what they can get?

How do I assert that no one who chooses to live out loud is “asking for it?” Catcalling, entitlement, and body shaming exist among all people and to all genders.

However, there is an expectation among people like me whose appearance is deemed “othered.” Take your pick: chubby, hairy, bearded, tattooed—whatever it is, when the opportunity for affection comes along,

Hang on to it, and do your best not to fuck it up, because you’re lucky you’re getting any affection at all.

And that stuck. For many years I stayed in relationships where my body was put on exhibit like an assembled mass of dinosaur bones and subject to scrutiny.  And in that time, two verdicts always arose:

1. “You are revolting because of your [blank].”

And I have sad news for all the fetishists and “chasers” of the world: both of those statements are two sides of the same goddamned coin.

I used to be an active member of the “Bearding Community” (yes, actually a thing) where cis men would gather and trade photos of their impressive beard, and talk about how strong and manly and virile they were because of a bunch of follicles that sprout from their face.

It was bonding. It was communal. It was congratulatory.

Then I posted a picture of me, and of MY beard. It was divisive. It was isolating. It was strange. But most of all, it was “othered,” which made it open season for admonishment.

But God forbid I defend myself.

“Hey, you put that picture out there. You GAVE ME that right to say what I want. You want to look like that? You’re ASKING FOR IT.”

But see, the follicles on my face or no different—no better or worse—than yours. You posted a pic. I posted a pic. I never at any point requested, “Would you please insult me?”

So you know what that means? IT MEANS I DIDN’T FUCKING ASK FOR IT.

I don’t care what’s growing on my face vs. what’s nestled between my legs. I don’t care how strange or jarring it is to you. My consent is for ME to allocate. It is NOT for you to imply.

My right to respect—and self-worth—is not contingent on whether or not you’d fuck me, which brings me to Vile Statement #2. Because some people do want to fuck me, just for what IS growing on my face.

Now, you may ask: how is that not a good thing?  You would certainly think that a man who is willing to appreciate, let alone tolerate, someone who actually looks like me would be welcome.

You would think I would be GRATEFUL. Grateful for what exactly?

Grateful for complete strangers wanting me to send them pictures of my armpits and legs?

Grateful for men calling out on the street, “Hey, what else on you is hairy?”

Grateful for every comment that says, “mmm, sexy hair” on a photo that has nothing to do with it?

Or grateful for every email from a would-be suitor that contains the line, “I’m sure you don’t get too many guys that like someone who actually looks like you.”

(And yes, men have written exactly that.)

That’s the line that hurts more than the picture requests, the fetish-y  comments, or even the catcalls.

So, you “have a thing” for hairy chicks, or tattooed chicks, or chubby chicks. You want a cookie? A pat on the back?

I hate to tell you, but you don’t get a reward for your noble courage to have such unusual taste. I’m not going to fawn over you in gratitude like a fair maiden.

“Rapunzel, Rapunzel, let down your beard!”

Because just like I told those dude-bros in the Bearding community, my self-worth does not depend on you knowing, seeing, touching, or fucking “whatever else is hairy.”

You are not my knight in shining armor. I am doing fine without you. And for what it’s worth, yeah, ACTUALLY, I do get many guys who like someone who looks like me.

If all you can do is reduce me down to one small aspect so you can add me to your fetish collection, it is YOUR LOSS, because you are missing out on all the other things that make me beautiful. So, no. I am not grateful.

And I implore everyone else to stop being grateful.

All of you who have been told to stop being so picky and just take what you can get?

Because someone out there will “actually” love you for who you are.