Kelly Clarkson's Weight Is Not News 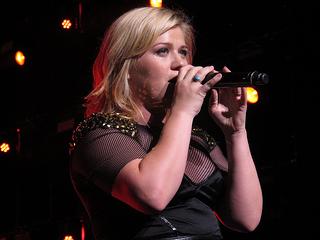 Expecting any human being, male or female, to operate in the very narrow constraints of what the media/cosmetic/weight loss/elective surgery industries consider to be "beautiful," or even just acceptable, is absurd.

Maybe you aren't paying attention to the news either. So let me fill you in on this little tidbit I came across.

A (sort of actually despised) British journalist Katie Hopkins—I'm only using her name to give to the story validity, because she doesn't really deserve space—said some pretty scathing things about Kelly regarding her weight (gain). What she said exactly isn't as important as the fact she said it. You can find more about it here if you'd like.

Can we concur that Mean Lady doesn't deserve our time or attention? Excellent. She will henceforth be referred to as Mean Lady.

Mean Lady said something that, for all intents and purposes, suggested that Kelly Clarkson is fat. Kelly had a baby not long ago. Perhaps she's failed to lose all the weight of pregnancy. Maybe she likes cookies. Maybe neither of those. Maybe both. Maybe it doesn't matter.

I'm optimistic that is the case.

At the time, the voice I heard wasn't Kelly's crooning. Rather, it was the voice of the entirely average American woman. Me. My family. My friends. Saying, it's hard. It is really hard. To get thin. To stay thin. It's not hard for everyone. But it is hard for a lot of us. Kelly's weight always seemed to make headlines. "KELLY CLARKSON IS FAT." "KELLY CLARKSON LOSES THE WEIGHT." Or something similar. The truth is, despite what the media wanted us to believe about Kelly, she is just like us.

Imagine this: A celebrity gains weight, and no one says anything. As long as I can remember having paid attention to the media, I can remember a woman's weight—or body in general—being a news story. Lindsay Lohan was called anorexic (and to be fair, probably was). Oprah (who could quite easily own any news organization that even mentions her name) has been in the news forever because her closet covers a range of sizes from skinny to "obese." Miley Cyrus. Mariah Carey. Jessica Simpson. Kirstie Alley. Britney Spears. Janet Jackson.This list is exhaustive. And I didn't even have to google that because I remember. All of them.

I remember, because the media won't let me forget, but also because every one of those women is telling my story. My weight graph would look like a three year old drew it. From Mt. Everest to the Grand Canyon, and back again. And again.

I recently wrote my story about my weight because I wanted to tell women, that it's not just OK, but it's actually awesome, to be happy and to love your body, yourself, at any size. Did the bold lettering make it more believable? Because it is. After I wrote that little thing—which became a huge thing—I heard from women everywhere, "Thank you for telling my story." Quite literally everywhere—from Iceland to Iowa.

Naturally, because you can't please everyone, and shouldn't even try, I heard from people who said I was fat, stupid, gluttonous, selfish, sick, ugly. Well what do you know, as it turns out, there are Mean Ladies everywhere.

I'd be a big fat (no but really, I actually am fat) liar if I said those comments don't sting. They do. I try, quite diligently in fact, to remind myself that the world as a whole doesn't have to understand my journey. My life isn't for them to approve of. But even the most ardent effort is sometimes futile.

Kelly gave Mean Lady a wave of the hand with a simple, "Someone tweeted something about me?" Which is the same regard I gave her when I read the article. That is exactly the amount of regard she is deserving of. I don't know Kelly so I can't say with any authority that she truly dismisses these comments without consideration.

But I do hope that is the case.

She should. Because expecting any human being, male or female, to operate in the very narrow constraints of what the media/cosmetic/weight loss/elective surgery industries consider to be "beautiful," or even just acceptable, is absurd. Completely unrealistic, and often unattainable. I too wave my hand at those who mock me, at all of the Mean Ladies (and men) who live to hurl insults. For myself, for Kelly, and for all the women who are witness to anyone being dragged across the coals of unrealistic expectation.

To the Meanies I say good day, and may you dig deep enough to find the place inside you that screams, loudly, that all human beings are deserving of respect, of love, of happiness. Simply because they exist.