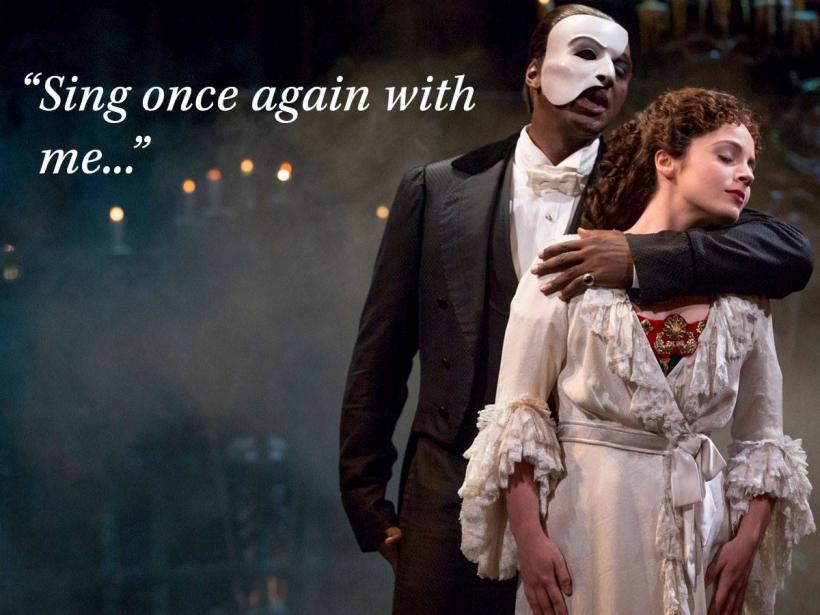 Credit: Facebook/Phantom Of The Opera

I love—LOVE—The Phantom of the Opera. I don’t remember a point in my life where I was not a “phan.”  The bombastic organ, the crashing chandelier, the drum machine, the dry ice, the motored gondolier—GIMME. I love it, all of it. (And to be clear, I’m talking the 1986-[forever?] stage musical, not the tepid 2004 movie off which it was based.)

And like a lot of phans, I found solace in resonating with the titular character. He had unusual things going on in the facial region (an unnamed birth deformity). I have unusual things going on in the facial region (a beard, punctuating a pussy-bearing body). He was in a freak show. I am in a freak show (though the original book implies that his experiences were somewhat less nurturing than mine are with Wreckless Freeks). He loved, sang, and wrote opera. I do quite a bit of that myself. He felt isolated and alone, and so did I (I know. How 10th-grade-marble-notebook-full-of-angsty-poetry of me).

So when, in July of last year during a trip to NYC, my wonderful boyfriend gifted me with surprise tickets to see it on Broadway (my fourth time), I thought it would be another thing we could share in wonder. Now, I thought, he will experience the magic.

When the final bows were taken, the lights raised, and our cab hailed, he turned and trepidatiously admitted, “The Phantom is such an MRA (Men’s Rights Activist). He manipulates Christine, forces her to love him, and then gets surly when she picks the other guy, crying about now no one loves him. He’s the ultimate ‘nice guy.’” (If you want to take a cheap shot, you could also say he’s the ultimate basement dweller.)

“Yeah, but. . .” I grasped, crestfallen. “But he was so misunderstood, and it’s not his fault. He was socially maladjusted.”

I had no counter-argument. I let it go. Actually, I appeared to let it go. Internally, I let it brew. He’s a feminist, and was able to call out right away what made Phantom so problematic. I’m a feminist, and I couldn’t. I’ve been wearing red-curtain-colored glasses, unable to see through nostalgia, and into objectivity. And so began my struggle, worthy of an aria of its own: “Am I Bad Feminist for Loving ‘Phantom?’” [Cue the swell of the orchestra.]

Asking other phans proved futile. “See, this is why I hate feminists. They ruin everything. Can’t you just like something and stop reading into it?” Well, yikes.
Thankfully, asking other feminists garnered more insight: “You can recognize that something is problematic and still like it. What’s important is that you DO recognize it.” Well, hmm.

That I could live with.

Furthermore, I think it’s important to remember one thing about Phantom: He lets her go. After all the screaming (well, singing), and guilting, and ultimatum-ing, he finally “sees the light,” so to speak.

This has always been my favorite thing about the musical—that despite how often he claims to love Christine, he doesn’t really show it until he finally considers her feelings over his own. His desire to possess was selfish. His allowance of her happiness was honest love. It’s that bittersweet beauty that makes this show what it is. On top of that, it allows him to be redeemed (at least, for his crimes against Christine. Let us not forget, he does kill two other men . . .).

Is Phantom an “MRA?” A “nice guy?” A “friendzone” cry baby? Honestly, yeah. He is. But in the end, he owns it, and attempts to remedy it. I mean, he does it with a lot of tears and song reprisals, but he does it.

See, if we were to cut off all of our favorite forms of media because they contained problematic elements, we would live in a very silent and still world. That’s the thing about the patriarchy—it’s so steeped into our mythos that it permeates the outermost reaches of our culture. It is powerful.

Even when the lead character is a woman—even a kick-ass, crime fighting one—she’s often able-bodied and thin. Even when a sexually liberated woman gets a happy ending—she’s often white and middle class, perhaps with a “sassy,” “kooky” friend of color. Maybe she’s black, but light-skinned enough to not be “too black” for white America. Maybe she’s fat, but hourglass shaped enough so that she’s still “fuckable.”

We can applaud a creator’s attempts (and successes) at being progressive, and still simultaneously call them out on their shortcomings.

Similarly, we can still enjoy a piece of culture (and not as a “guilty pleasure”) that is problematic. It’s simply a question of how problematic—how many tropes, lazy stereotypes, or offensive jokes—are we willing to put up with before it ceases to become enjoyable? There is no concrete number. It’s a personal decision.

The Phantom of the Opera is certainly not without its flaws. Christine could have flipped both men off, walked away, and decided to go on tour as a Prima Donna instead. She didn’t. The fair-maiden-in-a-love-triangle thing ensued instead, with both men feeling entitled to her affection.

And you know what? I still love it. And I still cry every time.

If you like this article, please share it! Your clicks keep us alive!
Tags
Phantom Of The Opera
Tropes
stereotypes
media
MRAs
feminism
Wreckless Freeks
phantom
plays
singing
operas