The Real Problem With Starbucks' Race Together Program? Classism 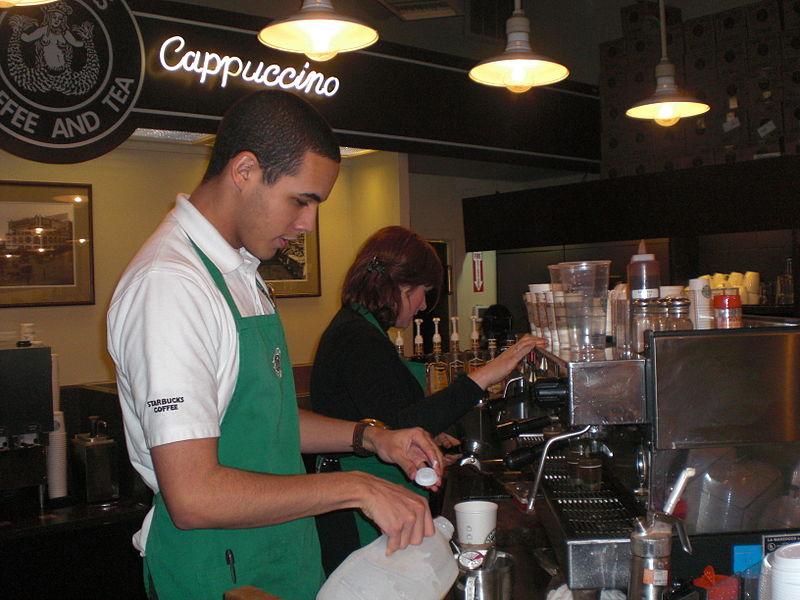 Race Together is just another way that rich people can force the poor to cater to their fantasies.

There's a decent chance you filled in the end of that sentence with "race." But in fact, Americans often talk about race, even though they're largely unwilling to address racial inequities. The thing Americans really don't like to talk about is class.

Which brings us to the much-discussed, much-touted, much-mocked Starbucks Race Together campaign. Following the police shooting of an unarmed black man in Ferguson, Missouri, and subsequent protests, Starbucks' CEO Howard Schultz has decided that Starbucks should be involved in a national conversation on race. Schultz held several forums throughout the country and this week, and as the next step, said that he was encouraging Starbucks baristas to talk about race with customers. To facilitate such conversations, Starbucks is putting "Race Together" stickers on beverage cups.

The initiative has in fact sparked discussion in many forums for better or worse. This Chris Hayes segment with Nancy Giles and Jay Smooth, for example, has good arguments for and against Schultz's efforts. Race Together has also prompted less collegial encounters; Conor Friedersdorf at the Atlantic reports that Corey DuBrowa, Starbucks' senior vice president of global communications, deleted his Twitter account after receiving a slew of abusive tweets from people skeptical of the Race Together initiative (one of which called him "mayonnaise boy.") Friedersdorf was outraged at the outrage over Race Together, plaintively insisting that even if Race Together isn't going to do much good, "it's hard to imagine the campaign doing any significant harm."

The problem here appears to be that Friedersdorf is not a very imaginative guy. It's easy for me to imagine the program doing direct, personal, and serious harm. All you have to do to imagine it, in fact, is think about class.

Because, you know, talking about race can in fact get you into a lot of trouble, especially if you don't have a lot of class power or status. What if an African-American barista brings up Ferguson and police brutality to a customer? What if the customer is offended? What if there's a police officer in the store who hears that and is offended? If things escalate, is the manager going to have the barista's back? What if someone with a phone records the incident and it hits, say, Breitbart? In that situation, is Starbucks going to protect their barista and give them a raise for following company policy? Or, as a perhaps more likely alternative, is the barista going to be quietly canned?

You can see variations on that situation too. A white barista might make a racist comment, for example. Again, if that incident is recorded and shows up on social media, is Starbucks going to defend the barista in the name of its commitment to the Race Together campaign? Or will it just fire them? I don't necessarily have a ton of sympathy for racists, or racist comments. At the same time, I'm not keen on screwing over the people on the bottom of the hierarchy so a CEO can get some press.

Other folks have pointed out that this program is unfair to the baristas too. David Frum commented on Twitter that "Corporate rights of free speech should not extend to compelling speech from employees," and Tracy Q. Loxley, a one-time barista herself, noted that between preparing coffee, stocking, and doing her job, she had little time for chit chat, and besides, in terms of her customers,"frankly, I didn't give a rat's patootie about their thoughts on life as it was." The baristas are being asked to do emotional labor, intellectual labor, and time-consuming labor in the name of the greater good of the nation. And will they be paid more for this labor? If Starbucks plans to double barista salaries and give them a title bump to "racial healing consultants," that might be okay, I guess. But somehow I doubt that that's what the suits have in mind.

America's never been good about seeing or thinking about class, but the move to a service economy has made things, if possible, worse. These days, part of everyone's job is to pretend that their job isn't their job; we're all just serving each other cheerfully out of the goodness of our hearts, cleaning up each other's shit while sporting a shit-eating grin. Part of our labor is supposed to be convincing ourselves and everyone else that there is no labor. The person selling you coffee isn't doing it for a paycheck; they're doing it because they think you're an awesome person and want to be your friend. Race Together is just another way that rich people can force the poor to cater to their fantasies, one of those fantasies being that poor people will cater to your fantasies without being paid anything for it.

If CEO Howard Schultz wants to talk about race, then I'd encourage him to go ahead and talk about race. Maybe he could even give a big fat check to anti-racist work or causes—there certainly isn't a shortage. But wealthy people handing down stupid dictats and screwing with their employees doesn't seem likely to transform America's relation to race. On the contrary, for the U.S. of A, it's just business as usual.

If you like this article, please share it! Your clicks keep us alive!
Tags
starbucks
race together
race program
racism
Classism
howard schultz