Playground Wars: Why I Dread Talking To Other Parents At The School Gates 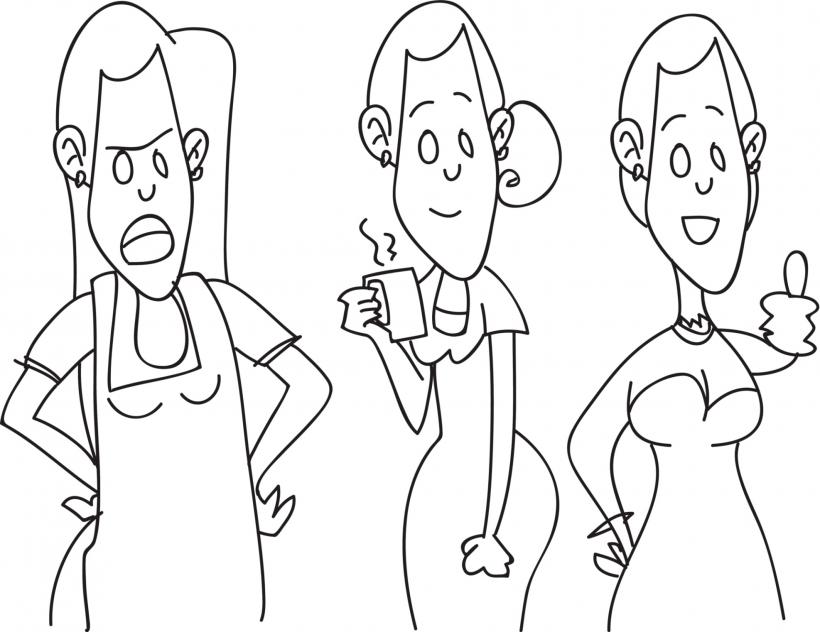 Don’t get me wrong, I'm not an anti-social person in the slightest. But there's something about the self-righteous, mommy cliques that feels like you're back on the school playground again. Still not cool.

When I became a mother four years ago to my beautiful son, it was an overwhelming and daunting experience.

As first time parents, I had bought every parenting book, and read every blog about having a baby and what to expect. What I quickly learned? No parenting book can ever prepare you for motherhood. I had never before experienced such feelings of love and fear both at the same time. I was full of anxiety, wanting to get everything right (because that's what the books said to do!), until eventually, thankfully, we found our own routine that suited us all. It had taken a long while before I was confident with my new role as mom, and with each daily experience, I am still learning.

But just when I thought I’d finally conquered the next hurdle of Corey starting pre-school, I was faced with yet a new one.  Mommy wars. I’d been so anxious about how Corey would cope without me for the first time, and how he would get on with making new friends, little did I know I would be in the same situation.

As a freelance writer, I have the flexibility of doing the daily school pick-up for 3pm. I soon noticed at 2.50pm, without fail, a particular group of moms would barge their way past everyone to meet at the front of the school gates. They formed the ‘cool moms club’, or as I call it, the ‘know-it-all-about-everything’ clique. They would also go out of their way to befriend the Head of School and class teachers, even if it meant buying them a bottle of expensive wine at the end of school term!

The first time they ‘invited’ me to join their group, I thought it would be great to meet other like-minded mothers. When we broached the subject of our kids it felt more of an interrogation. “So how many after-school activities does Corey do?” One of the mothers, who I could tell was the ringleader asked. “Well, err nothing at the moment. I’m still looking into ones he may be interested in. ” I say, “I don’t want to be one of those pushy parents!” That response clearly went down like a lead balloon. “Jack does soccer club on Monday, trampoline on Tuesday, swimming on Wednesday and music class on Thursday. Friday is a day off. He loves it!“

Not wanting to appear the nonchalant mother, I also add that he has a keen interest in basketball, martial arts and music and that I have taken him to try various activities. But if he didn't like it, we wouldn't go back as I didn't feel the need to force him at such a young age. We can always revisit later. “But even if they don’t enjoy it, at first, they will learn to,"began the ringleader. "All kids need to follow a strict routine, whether they like it or not."

I wondered whether Jack really wanted to do all of those, or his mother just wanted something to brag about.

“Isn’t that a bit tiring for a 4-year-old?” I chuckled, “It’s like putting in the hours at a full-time job.”

But rather than see my humorous take on it, there was a shared, horrified look amongst the group. “It’s great for confidence-building. My daughter has been doing these things since she was three,” piped up one of the other mothers. “I wouldn’t want my child to miss out on all opportunities available to him”, said another. And with that, they dismissed me to talk amongst themselves about something that didn’t warrant my opinion. I went home slightly hurt at the disregard, but just put it down to the fact that I was the ‘new girl’.

A few days later, I came to the school gates with Corey’s favorite scooter and stood by the mothers. One of them took one look at it and commented, ”I have the limited edition gold mini micro. It’s a bit expensive, but the best high-spec brand.” I mutter an “OK,” not wanting to elaborate on such a tedious topic. To me, a scooter that looked decent, economical and importantly, safe for Corey to use was all that mattered, not the brand. However, judging by the disapproving glances at the scooter from the other mothers, I was decidedly behind the times.

One afternoon a few weeks later, while discussing the current, pre-school syllabus, I mention that I had home schooled Corey on phonics from the time he could talk and as a result, he was able to read books from the age of 3. He could now write basic sentences, and his extensive reading and spelling had earned him a special merit in his class. But rather than be remotely impressed, or offer any praise, (a high-five or even a stiff-lipped nod) the mothers actually suggested that I was hindering him.

"I was told not to teach reading too early," sniffed one mother. Utterly bemused, I asked her why.

Surely, that is the perfect time to educate a young mind, who is willing and receptive to learning? As they say, children's minds are like sponges, they absorb everything.  "Because if they are too far ahead of what their classmates are learning, they would get bored," another mum answered, "or even disruptive. It's better if they are all at the same learning level."

I disagreed whole-heartedly ,but respectfully acknowledged her view . . . then I noticed not one of the others had come to my defense. In fact, that was how they seemed to operate during every discussion we would have. Whether it be about attachment-parenting, homework, activities, what they have in their diet, plans for parties, they would always share their infinite wisdom and parenting knowledge,  but didn’t give care one bit about mine.

I soon began to dread each time they would make small talk, each time I had to mingle at the gates.

Everything was a competition: who was hosting the best birthday party for their child, ‘we’re hiring entertainers, clown, face-painting, and a live band or we may just go to Disneyland Paris.’); who is buying the most expensive gadget; whose child is the smartest, (‘Lily-Rose can speak four languages’); what culinary delight would you be entering into the coveted bake-off contest?

And after each conversation, I would come away feeling like an inadequate mother, judged and constantly uncomfortable because my parenting choices didn’t match their own.

Finally i began to ask myself—had our children not been in the same class, would we have much in common? The answer was a resounding no! I wanted to talk to mothers who were unafraid to ask for advice, freely express their anxieties, or like myself, could empathize when things don't (often) go to plan! We often put so much pressure on ourselves to be that perfect mother, that sometimes, it's nice to be reassured by other mothers that no one ever is. We can only do our best.

I didn't want to fake it anymore. I didn't want to "fit in." After a month or I began to distance myself—literally! I would stand further and further away, and deliberately occupied. My head would be buried in my phone or earplugs in (without any music), secretly hoping that one of the mothers wouldn’t catch my attention to engage in yet another unbearable conversation.

Motherhood is tough enough without having to justify my every decision with a group of strangers.

One day, I spotted another lonesome mother standing in the corner with her earplugs in. I stood beside her and exchanged smiles, as we both observed the scene of animated mothers at the front. “I’ve noticed there’s the usual clique of moms . . .” she said. From that moment, we bonded immediately. We shared similar experiences and anxieties, and it was a relief to know that I wasn’t the only one who felt ‘inadequate’ at times. And just like at school, I’d found a new friend who equally dreaded those ‘mean girls’, and was far from judgmental.

I guess in my idealistic world, I thought all mothers would stand in solidarity, and be genuinely supportive of one another. Yes, we all have different parenting styles but we could all learn something from each other—after all, we're on the same team right?

Well, maybe not. But I've found one comrade and now the school-runs aren't so bad after all!

If you like this article, please share it! Your clicks keep us alive!
Tags
parentins
mothering
raising children
competition between mothers
pre school
marriage