Hillary Clinton Has Better Things To Worry About Than Her Pantsuits 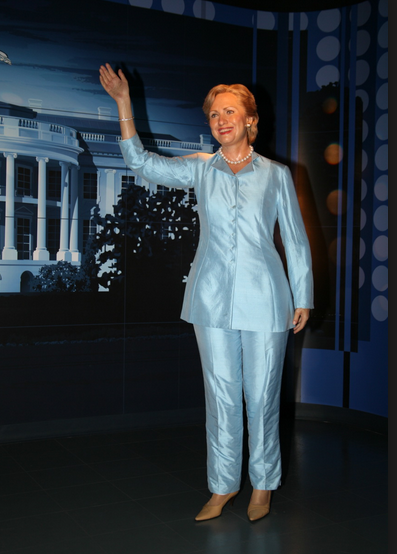 The woman, the myth, the wax. Courtesy of Flickr.com

Want to dress for success? Find yourself a uniform. So says Elite Daily, in their piece: "The Science of Simplicity: Why Successful People Where the Same Thing Everyday."

Personally, I loved this idea, if only because it gave me an excuse to embrace my current uniform. Every fricken day of my life I wear black (or grey) leggings and a tank top (blue, neutral, or maroon) under a sweater (the grey one, the other grey one, or the maroon one), and I could not give less than a fuck.

But I also couldn't help but notice all the examples in the article—President Obama, Steve Jobs, Mark Zuckerberg, Albert Einstein—were men, which made me wonder if women could actually get away with this. Sure, being a writer, I can pretty much get away with wearing anything—my dog doesn't complain what I do so long as I eventually drag myself away from my computer and take him for a walk or ply him with the occasional biscuit. But what about women who work in more corporate settings and positions like the men profiled in the piece?

Would Sheryl Sandberg be able to get away with leaning in wearing Zuckerberg's signature v-neck T-shirt and jeans?

History says no. German Chancellor Angela Murkel, named by Forbes as the most powerful woman in the world, was in turn chastised by the same publication for her frumpy power suits. Then there's the time that Federal Reserve Board chair Janet Yellen was criticized for appearing at her nomination hearing in—gasp!—an outfit she had already worn in public five weeks earlier.

As blogger Annalyn Kurt put it: "We're still not at the point where a woman can rise to the top of her profession without having her pantsuits critiqued as soon as she gets there."

Even when we're being positive and showering in praise (as is often the case with Michelle Obama, for example), women's togs are sized up and scrutinized for in a way that men's aren't. Ever. And—sad but true—some of the most obnoxiously fastidious examples are written by women. Sure, it's not always sexist to talk about what powerful women are wearing, but what if we, I don't know, paid a bit more attention to what these women said instead?

Perhaps nothing makes it more apparent that women are the inverse peacock of our species than the never-ending parade of think pieces written about Hillary Clinton's wardrobe. Even before she was officially a 2016 candidate, bloggers were speculating about what she'd wear on the campaign trail. (Yes, that's four different articles.)

Case in point is a photo slideshow on Harper's Bazaar, which has Hillary dressed up as a paper doll, and quotes designers offering helpful advice like suggesting she go for looks that are "constructed without looking stiff—perfect for the woman on the go." Can you imagine someone giving Republican candidates Marco Rubio or Ted Cruz similar, obsessive aesthetic counseling?

If it's true, as Elite Daily points out, that people can be fatigued from such simple decisions as what they should wear, Hillary Clinton must be exhausted. The media has criticized her for going without makeup—there's even been a poll over whether or not she ought to be banned from wearing scrunchies. If the media had its druthers, Hillary Clinton would spend more time in the dressing room than the White House Situation Room—and ply the public with the same opinion.

There's at least one successful woman who gets away with wearing a uniform, however. In fact, she's lauded for it. In an interview with Elle, cultural critic, writer, and sometimes actress Fran Lebowitz talks about her habit of wearing the same thing every day: a jacket, a men's shirt with cufflinks, Levi's jeans, cowboy boots, two gold rings, and tortoiseshell glasses. "Every single day," she says. Of course she wouldn't approve of my uniform—"yoga pants are ruining women"—but she does say that "clothes don't really fit you unless they're made for you," which has me wondering if they make bespoke yoga pants.

A little further down, Lebowitz reluctantly admits that her eyeglass frames cost about as much as a car (probably not a cheap-ass used car like the type I'd be driving if I wasn't already relegated to public transportation and my bike).

It seems fashion folk are more at liberty to embrace the idea of ignoring what's fashionable and going with what works; they're not even operating by their own rules. "In the end—even as a fashion professional, or fashion insider, someone who's looked at fashion for so long, and from so many different angles—there is a uniform that works for you," says designer Vera Wang.

Wang's uniform, I'll have you know, is very similar to mine—leggings and a T-shirt—upon which she layers what she calls "a fashion part." Whereas I toss on one of my three sweaters and go, Wang fatigues herself by choosing between knee-highs or hosiery. "Or it could be a crazy belt," she says, then admits to owning "an incredible collection of jackets and outerwear and tunics." So, not exactly Albert Einstein minimalism here.

Bottom line: if your coworker is not your cat, you can get still away with wearing the same thing to work everyday. Just make sure that the black tank top you're wearing costs more than my mother's annual salary and/or you're accessorizing with something other than a trickle of toothpaste. And you're not a politician. And definitely, you're not Hillary Clinton. Or any other women of political prowess and power.

In other words? Let's give Hillary a break. Sure, I know some women enjoy fashion, but I personally know far more women who—like myself—can't afford to care or own it. And that's okay, because I've got more important things to think about. So does Hillary Clinton.