The Trials And Tribulations (And Trauma) Of Getting A Good Haircut 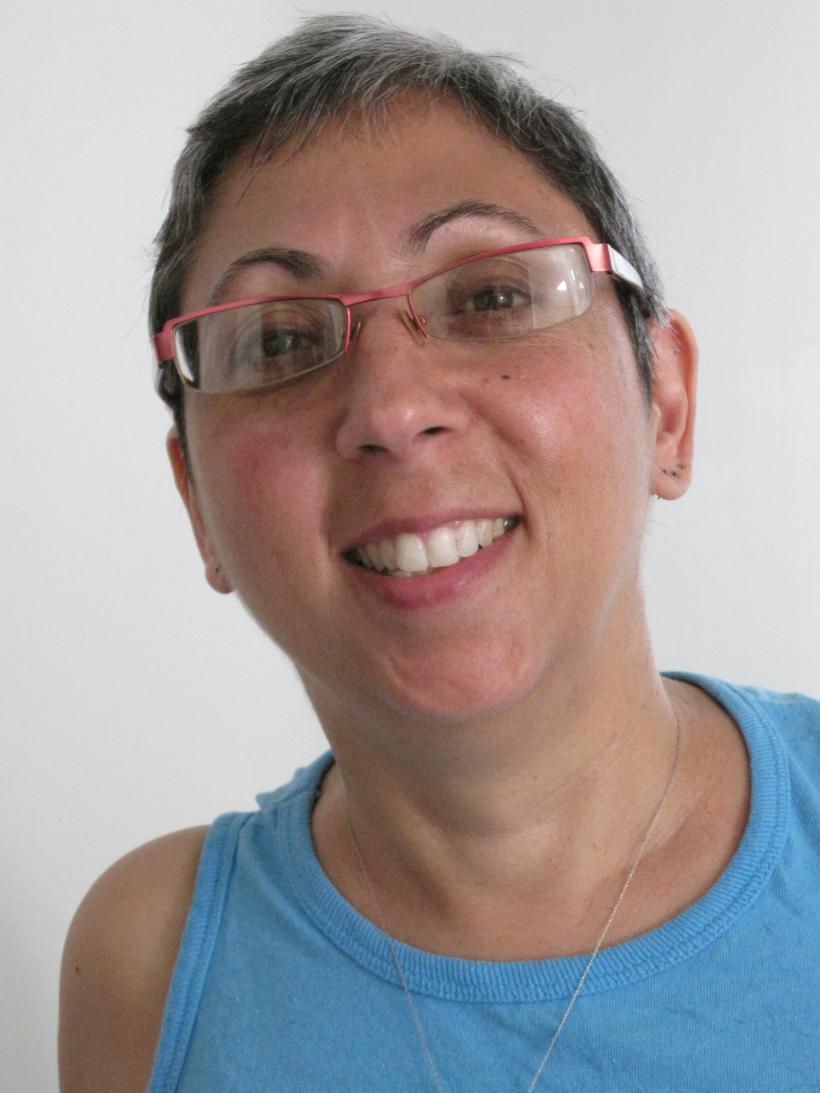 Leena felt my head. She told me it was bumpy. "You have a very big brow," Leena declared as she pushed my hair back, then forward, re-contemplating the geography of my cranium.

Getting a haircut has always been a traumatic experience for me. My earliest recollection is of Aldis's decrepit beauty parlor, which smelled of charred hair and peroxide. Her smock was perpetually stained with a myriad of unnatural hues. Aldis was very nice—except when she had a pair of scissors in her hand. Then something terrible happened, usually to my head. I sat obediently in her chair atop four ancient copies of the Yellow Pages. Crossing my fingers, I prayed Catholic schoolgirl prayers.

But the end result was the same: it looked like someone had plopped a black rice bowl onto my head. "You look cute," my mom told me and my sister Liz, who had the exact same guillotine cut. "The kids'll make fun of us," we wailed. And they did. Mercilessly.

Even in adulthood, the whiff of an old-fashioned beauty shop was enough to induce a mild panic attack. The thought of getting a haircut sent my heart racing—and not in a good way. As a result, a few years ago, my unruly salt-and-pepper tresses trailed down my back, unbridled as Medusa's. Something clearly had to be done.

"Why don't you go to one of those fancy salons?" my husband Peter suggested. The ghost of Aldis surely wouldn't be lurking there, I told myself. I mustered the courage, called one, and was granted an emergency appointment.

Standing in front of a hair care industry staple in midtown Manhattan, I knew it was far too ritzy for a Brooklyn waif like me. I could barely afford an apprentice cutter let alone a fully-licensed stylist. But I took a deep breath and went in anyway.

Immediately, I was whisked into a changing area and given a trendy wrap. I went into a mirrored, private compartment, stripped, draped myself and gave my shirt to the woman at the clothing-check station. Already I felt vulnerable—i.e. half naked and topless.

Next, I was shown to a chair in a row of identical chairs. A bright, smiling face with a lopsided 'do asked if I wanted coffee or tea. I didn't. My stomach churned in anticipation. I waited—for an audience, as it turned out.

Surgical procedures don't have this many consults. Leena, the cutter-in-training, appeared. Then a man, presumably of higher rank, materialized. They considered my head, frowned, pondered and whispered. Another helper asked if I wanted coffee. I still didn't. Finally, Leena addressed me directly: "What did you have in mind?"

I had no idea. I just wanted a change. "Something shorter?" I suggested.

"How short are you willing to go?" Leena asked gravely.

"I'll leave that up to you." Famous last words.

Leena felt my head. She told me it was bumpy. "You have a very big brow," Leena declared as she pushed my hair back, then forward, re-contemplating the geography of my cranium. Her advisor did the same. A woman with a broom and a cranberry crop paused briefly at my chair. "Coffee?" she wondered.

Leena relinquished my scalp to Yoshi, who gave me a wash with nimble, efficient fingers. Yoshi seemed vaguely annoyed that my hair was so long, as though this were a personal affront to him. Then Yoshi handed me back to Leena. No, I still didn't want anything to drink, thank you very much. I sat in Leena's chair, sans Yellow Pages, and crossed my fingers under my designer wrap.

Why were all of the attendants called Yoshi, Leena, Su and Gaspar? Were these their given names or were they christened anew upon hiring? Was there a clause in their contracts that stipulated their wardrobe must consist of a funky form of black? And why did they keep asking if I wanted coffee? Should I just say 'yes' so they'd leave me alone?

Above my head, Leena wore an odd expression, as if possessed by a freakish demon barber: Aldis or maybe Sweeney Todd. Leena had embarked upon a coiffeuristic quest. My head was the ultimate challenge of her apprentice-cutter career. Wasn't it every stylist's dream to transform a rat's nest into something chic?

I tried not to pay attention to the mad clatter of metal above my head or gape at the long ebony and silver curls which littered the floor. Broom Woman came by three times to whisk away the piles of hair. "It'll look great," she said reassuringly.

Leena tugged at my damp locks, grimaced, measured and considered. "Do you use any product?" she wondered.

Product? "Mousse, gel…" she sighed. No, I told her. In fact, I didn't even blow it dry. Again, Leena frowned. Wrong answer.

After almost an hour of meditative snips, sprays, foamy applications, scrunches and twists, the ordeal was over. Someone else looked back at me in the mirror. Her eyes were brighter. She confidently met my gaze, poised yet strong. And yes, maybe even sexy. That she was me. I was transformed. Reborn. Rejuvenated.

There were numerous pats on the back and chucks on the shoulder from my triumphant team. "Come back in four to six weeks!" Leena chirped. The lady at the clothes check barely recognized me. Ditto for Yoshi when I tipped him.

My husband's jaw almost hit the bar at Farrell's when I sidled up and asked him to buy me a drink. When I'd left the house that afternoon, I was a wild-maned hausfrau but now I was sleek, slick and smartly shorn. I held my breath for his reaction.

As Peter studied my face, a vague smile crossed his lips. "I like it," he admitted, playing with my scruffy chicken feathers. "I like it a lot." Then he added, "It's like having another wife." I wasn't sure if that was a good or bad thing but I took it as a compliment.

Even my wardrobe looked revitalized. My body seemed perkier, as though I'd lost ten pounds. Yes, I liked the new me. And it was all because of an overpriced haircut.

"Four to six weeks" rolled around before I knew it. I made another pilgrimage to Leena. She noted how quickly my hair had grown, cringing at the way it was combed. I obviously wasn't skilled at feathering or volumizing.

This time, Leena wasn't the devoted cutter she'd originally been. She split herself between me and a Swede who was livid about her too-brash highlights. Afraid to complain, I just sat there silent and polite, perhaps because the staff had my shirt.

When Leena returned to my side, I detected a strange gleam in her eye: the glimmer of success. I suddenly had the feeling that my head was no longer mine but Leena's own canvas of self-expression. I also got the impression that nothing I said registered. Leena had the same faraway look Aldis used to get when my mother gave her instructions behind my back. But this was much deeper, almost frantically spiritual.

I suddenly realized that it was far too simple for someone as driven as Leena to merely recreate what she'd already done. This time, she was compelled to devise a fresh challenge, to make a brand new statement-via my head.

Arms akimbo, Leena descended upon me like a clipping whirling dervish. After no less than two hours of painstaking cuts and miniscule snips, I didn't have the courage to look. But when I did, I was faced with the image of a slightly chubby woman from a posh refugee camp. And guess what? She had the nightmare bangs of my youth.

Alas, Leena knew she'd never see me again. I tried to hold back the tears as I left the salon. I did a good job until I reached the cold comfort of the subway. There, you can quietly sob and no one seems to notice—or care.

At home, Peter attempted to be charitable. "It'll grow back," he offered. I avoided the mirror. At least the Gelston Avenue kids weren't there to make fun of me anymore.

In four to six weeks, I went to a little neighborhood salon, to someone named Mary. I got a better cut at the fraction of the cost. Attitude not included.

If you like this article, please share it! Your clicks keep us alive!
Tags
getting a haircut
Memoir
childhood
bad childhood haircuts
haircut trauma
chopping off long hair
humor
personal essay