Not OK: Street Harassment When I'm With My Child 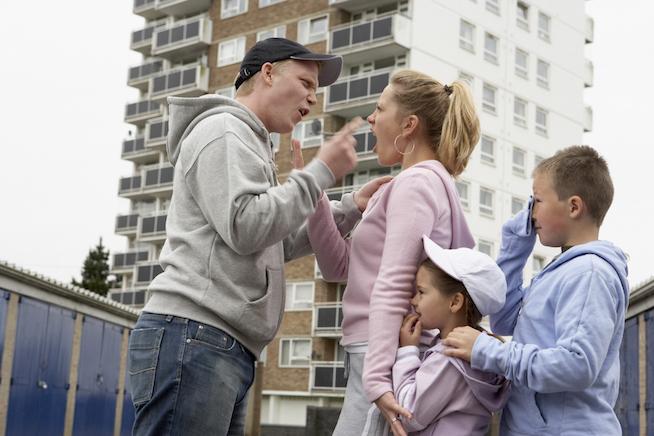 Street harassment is the worst. I don’t know a single woman that enjoys the unsolicited comments or intrusive behavior that comes along with being street harassed. It’s incredible how a short interaction can have such a huge effect on your day. Just one catcall can make me go from feeling fabulous to wishing I could curl up into a ball and disappear. It’s bad enough when I’m street harassed out by myself — I feel vulnerable and deciding how to respond can be hard. But it gets really complicated when I’m harassed and with my child.

When I’m walking the streets by myself, street harassment can be incredibly jarring. My mind races as I try to decide the best way to respond. I quickly assess my safety and, more often than not, I choose not to respond at all, out of fear that the situation will escalate. When I do respond, I often go for the straightforward, “Don’t speak to me that way. It’s not respectful.” But every now and then, I lose my temper and throw them a big, “Fuck you!” There’s no shame in that.

As someone who spends a great deal of my time advocating for safe public space, I know that there’s no wrong way to respond to a street harasser. I know, logically, that the best response is the one that makes you feel safest in that moment. Yet I’m also someone who doesn’t want harassers to think that their behavior is acceptable. It’s one thing to take a risk when I’m by myself, and responding to someone who’s harassing me, but it’s something entirely different when I’m with my child.

As a parent and a feminist, I want to teach my daughter that misogynistic behavior is not OK. I don’t want her to think that street harassment is just a part of life that she has to accept and learn to ignore. I want her to know that her body is hers, and just because she’s in public, it does not mean that her body belongs to the public. And I know that she will be watching me to see how I respond when men yell unsolicited things. At the same time, I want to keep her safe. It’s not just my own safety that’s at stake anymore — when I fire back at a harasser, it’s also my daughter’s.

The last time I was catcalled when I was with my daughter, a man followed us, by bike, for two blocks while I pushed her in her stroller. “Is that your baby? Where’s the baby’s daddy? She’s real pretty, like you.” I wanted to turn around and tell him to fuck off. But instead, I put my head down, smiled and said “Thank you,” through gritted teeth, and kept pushing the stroller. She’s too young to notice how I respond, but one day she will. And when that day comes, I want to do right by her. I don’t want her to watch me feel like I have to thank a man for making me feel unsafe.

I don’t have any easy answers. What I do know is that no feminist statement or empowering response is worth endangering my daughter, and I hate that street harassers have the power to put me in this no-win situation. I also know that I want to show her how to be a changemaker and how she deserves to be treated. So the next time a man yells, “Hey, mama!” at me while I’m walking with my daughter I will try my best to evenly say, “That’s not a respectful way to speak to women.” And the two of us will walk on, knowing that we deserve better than that.

If you like this article, please share it! Your clicks keep us alive!
Tags
street harassment
harassment
sexual harassment
catcalling
feminism
misogyny