Infertility: The Cold Hard (No, But Really) Truth 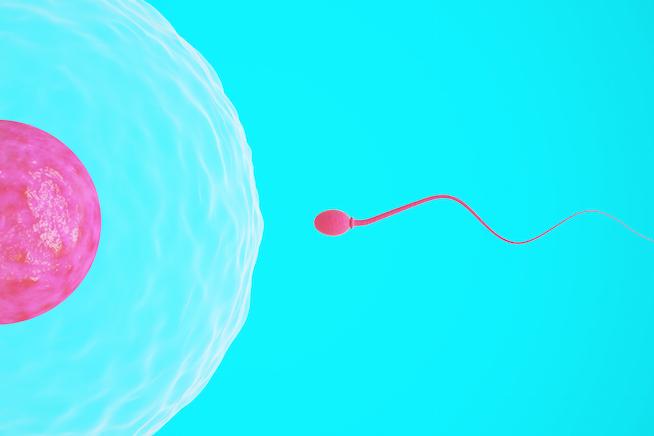 Sperm meets egg. Or maybe not?

I found myself sizing up a dude once in the grocery store that looked a lot like my husband, wondering how fertile he was, and if he might, you know, jerk off into a cup for me. So, basically, I was a little ridiculous, possibly because I was also on a cocktail of fun medications to make me super fertile.

A few years ago, I listened in my pre-Cana class to the portion on fertility and birth control. I remember clutching my soon-to-be husband’s hand so hard that it left marks —as the presenter, an actual medical professional, discussed how God doesn’t want you to use birth control and how it causes cancer and is basically like having an abortion every month, and how reproductive issues like infertility could be fixed with natural family planning. I knew then it was bullshit, of course, but I kept my mouth closed and did not slap the speaker with a science-y truth bomb.

Fast forward to now, when I know firsthand how wrong that all is.

My husband and I married in the Catholic Church and have Catholic families, although mine is a little more of the “mass on Christmas” variety, and his is “more Catholic than the Pope” type. Shortly after we got married, we started to try to add to our family. And a big fat nothing happened. Even when I charted my cycles just like we were taught in pre-Cana.

We went to my provider to see if there were issues, because although I am only in my 30s, that’s practically ancient in babymaking years. After a plethora of tests, we got the answer. My husband had zero viable sperm.

We had a number of options. All of them involved donor sperm, and none of them were Church-sanctioned — which was not an issue for my practically heathen self, but was a problem for my husband. Worse, he couldn’t really talk to anyone in his family about the issues we were facing, because they would parrot out that maybe we weren’t meant to be parents, or that we could adopt. My husband feared that if we went forward with infertility treatments, his family would threaten to disown him because we were going against the Church’s teachings.

After much discussion and sharing, we decided to move forward and made plans for our first round of intrauterine insemination (IUI), which is where sperm is inserted through a catheter into your uterus when you are ovulating. It was a whirlwind of emotion — selecting sperm with my husband was totally strange. Sentences like, “Hey, honey, what about this guy? Look, his baby pictures sort of look like yours!” came out of my mouth with alarming regularity. And sperm is EXPENSIVE. Ohmygosh. Paying $300-$600 for a single vial of sperm makes you understand why people take to Craigslist for willing donors. I found myself sizing up a dude once in the grocery store that looked a lot like my husband, wondering how fertile he was, and if he might, you know, jerk off into a cup for me. So, basically, I was a little ridiculous, possibly because I was also on a cocktail of fun medications to make me super fertile.

Our first IUI happened, and I can describe it as “OH ALL THE SWEARING THIS HURTS SO MUCH WHY IS THIS TERRIBLE THING HAPPENING.” It turns out that I have a scarred cervix, which requires that it be manually opened in order to put in the catheter. My provider described the instrument used for this as “Satan’s pitchfork,” which should tell you all that you need to know.  Next is the two-week wait, in which your uterus is like Schrödinger’s experiment. Spoiler alert: The cat was not alive this time.

I am a very open person who believes that infertility isn’t discussed enough, despite the fact that 7.4 million women have used infertility services (as per the CDC). Because of this, I’m quite open to most people about it. Just like everyone dealing with infertility, I got a lot — a LOT — of stupid comments. Did you know that if you stop trying, you’ll get pregnant? Did you know that essential oils/acupuncture/chiropractic care will get you pregnant instantly? Did you know that infertile people can just adopt and that anyone struggling with it should just give up and do that because plenty of kids need homes and why would you be so selfish and not just adopt them? And, you know, at least it’s fun trying! People also never tired of telling me how they, too, faced infertility that time it took them three months to get pregnant.

If you ever know anyone trying to have a baby in any form, don’t say these things. They are terrible.

The cherry on the top of this was when a colleague heard me discussing what we were going through. She asked me if I knew that those treatments caused cancer, and if I’d tried natural remedies. After we spoke for a while, and I thought I was getting through to her, she ended the conversation by telling me to be careful with “pushing” my husband into this, because he would ultimately resent the baby and our marriage would be ruined, and also, that she would pray for me. Not that we got pregnant, mind you. She would pray that someone just decided out of nowhere to give me a baby to adopt. Because this is totally how adoption works and is not at all offensive. Also, my husband — who is the stepfather to children from my previous marriage (I’m a bad Catholic in like a jillion ways) — clearly couldn’t love or be devoted to a child not specifically of his DNA (unless we adopt, apparently) without resenting everyone and ultimately leaving me.

Going through this has been hard, and I’m sure it will get even harder. We have three rounds of failed IUI attempts under our belts now, and we are gearing up to try lucky number four. But the experience has made me want to go back in time to that pre-Cana class, so I could stand up and tell all of the people in the room that if you choose to have children or not, if you choose to treat infertility or not, that is your decision. God will still love you. Your marriage will not be irreversibly torn. Your bodies and your decisions belong to you, and as long as you are not actively stealing a baby from someone else, you are fine.

Most importantly, you are not alone.

If you like this article, please share it! Your clicks keep us alive!
Tags
infertility
ivf
IUI