90's Revival Mania! Is It About More Than Just Style? 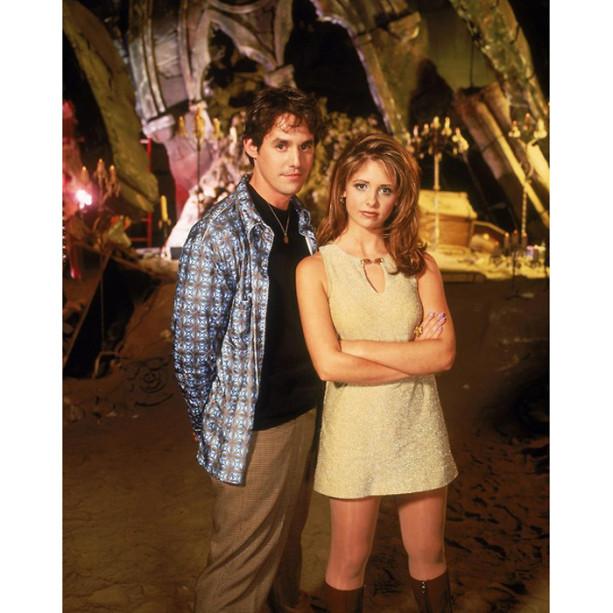 Backstreet’s back, alright. Admittedly, I'm a little slow on the uptake with this one (their album In a World Like This dropped in fall of last year after all), but the impact hit me hard just the same. Even though their new videos depict them looking pretty 1998—I’m looking at you, Nick—I am as proud as a grown up '90s girl can be of how my boys have turned out.

But the question still begs to be asked: What is up with all the '90s revival mania?

It’s not just BSB. The Destiny’s Child comeback earlier this summer, Girl Meets World on the Disney Channel . . . and there's even an all 90’s, all the time bar that just opened in San Francisco. I used to think it was hard to be nostalgic about decades that were less than 20 years old, but I have been proven wrong time after time. (Romy and Michelle, anyone?)

In the past year I have grown to have an undying love for the champion chosen one who defends us against the undead: Buffy the Vampire Slayer. In season one I swooned over Buffy’s '90s attire and the '60s mod inspiration that made her shine—from the heels of her knee-high boots, to her adorable shift dresses, to the poofed updo's she did just right.

This '90s show with '60s style perfectly encapsulates the weird era we're living in now, in which this '90s comeback has fused with distinctly '60s sensibilities.

While attending a family reunion on Orcas Island and wearing twists in my hair accompanied by a flowy, sheer cover up and a cut up tee . . . I heard myself explaining, “It’s a '90s-inspired '60s revival.” Which was then immediately followed by the thought, What the fuck did I just say?

Our '90s fever has limits. We want to revisit that end-of-the-century decade, but pick through the carcass to choose only those parts that fit neatly into our modern paradigms. Lose all the metallic fabrics and racist Chinese take-out inspired handbags, but keep the sugar pop and witchcraft. Embrace BSB, but pretend Sugar Ray never happened.

Meanwhile, the '60s-inspired organic and spiritual self has made a serious comeback. Yoga, natural fibers and DIY cleaning products. Veganism, feminism, backpacking across America just for the hell of it, protests in the streets and the pursuit of free love (at least conceptually)—and clogs. How could I leave out the comeback of clogs?

Calling someone a hippy with all the repulsion of spitting dirt to the sidewalk is out, and the age of neo-chic flower child is in.

Yet some things haven’t budged a bit. We’re still contending with racial tensions and police brutality. We’re still racking up gut-wrenching amounts of souls lost to war overseas. Maybe the socio-cultural '90s/'60s mash-up is just a teensy bit responsible for the nascent push toward finishing the decade off with the second coming of the "revolution" we seek to emulate.

If looking into the aged (yet totally still good looking) faces of the BSB is going to inspire people to conjure portions of the past that worked, I say "I'm outtie" to the haters—I'm still gonna rock the cat eyes, clogs, 'fro and bold mixed patterns. I dig the revival for all it's bringing to this otherwise weary decade.