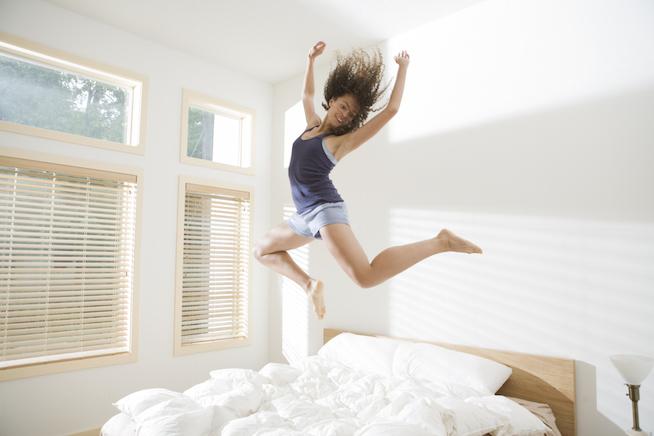 "you can never, ever go wrong when you choose to take care of yourself."

You know that girl who is always dating someone or chasing after her next relationship? The one who can’t seem to ever be alone and whose entire existence seems to revolve around her romantic conquests? Yep, that was me. I am a recovering serial dater who is now single and actually enjoying it.

I never thought I could be this girl, the one who’s navigating a blossoming career, traveling, and genuinely enjoying being a party of one. I can confidently say that I haven’t chased a guy in months and am realizing just how toxic my old patterns were.

Back in April, I had a really bad experience with a guy whom I’ll call Steve. Steve was someone I met online and instantly clicked with, so much so that we had a three-hour phone conversation the first time we talked, followed by him coming over to my apartment to spend the night. In essence, things went further than I intended them to and the entire experience made me feel really violated. What happened shortly thereafter confirmed his intentions and I found myself spiraling emotionally into one of the darkest periods of my life. Luckily, I was able to get the support that I needed, but I realized along the way that I was actually part of the problem.

Now, I’m not trying to suggest that victims of any sort of sexualized violence are to blame for what has happened to them, because the attacker is the only one who is responsible in prevention. But, this incident was a part of a larger pattern in my love life that included coercion, manipulation, emotional detachment, and emotional abuse. I realized that Steve was just a piece in the greater puzzle of my history with men, and that the reason I was repeating these dynamics was that I was recreating past history. In essence, I wasn’t over it.

At first, I thought maybe it was just a fluke, but as I pursued a few dates, I found that no, the same things were happening repeatedly. So I took a giant step back, hired a life coach and started to really get down into why relationships were so problematic for me.

Through all of this, I started by immediately declaring that I was going to be single. Of course, that only made me want to be in a relationship more, so I instead moved towards a healthy middle ground of single-but-not-really-looking. I would peruse OKCupid occasionally, but I wasn’t obsessively looking for my next mate, as I had done in the past.

At first it was hard — almost like being cut off from an addiction. Everywhere I turned, I felt like others relationships were being thrown in my face or I’d have to look at other people’s happily coupled lives and sulk in resentment. Thank goodness I held on and didn’t lose my nerve through this period, because all I wanted to do was find a partner just to say that I had one.

I saw myself slowly but surely moving into acceptance, and even more importantly, understanding. Sure, sometimes I still felt a twinge of jealousy when I saw that someone was getting engaged on Facebook or when I saw happy couples on the street, but I realized that I would be one of them soon enough, but never would I find true inner peace if I don’t work through my own personal sludge.

I’ve only had one relationship during this period. It was brief, and unfolded a lot differently than all of my other past loves. For starters, I actually broke with him. I was able to clearly see what type of relationship it would be from the get-go and was able to remove myself from it quickly and recognize that I not only wanted more, but I deserved more.

This is why choosing to be single has been the greatest gift I’ve given to myself, because what I really gave myself was permission to be with myself and give my issues the time and attention they need. Being single is sometimes self-care, and you can never, ever go wrong when you choose to take care of yourself.

If you like this article, please share it! Your clicks keep us alive!
Tags
being single
dating
OKCupid