My Relationship With My Mother, The Frenemy 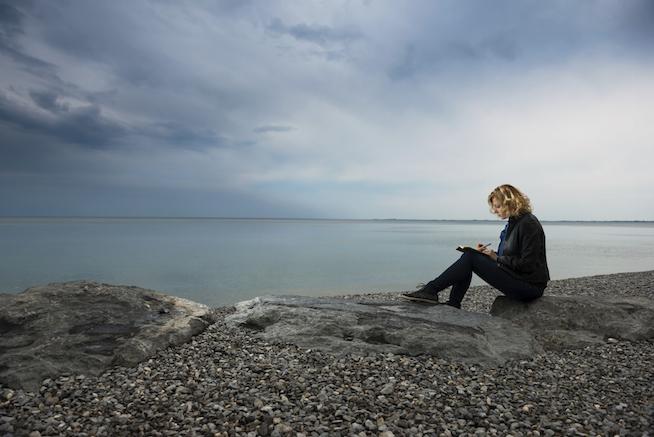 There is so much unresolved between us. We stand in a place where everything is gray: she can insult my wardrobe and in the same breath compliment my work ethic.

Last week, my mother came home from work, found the shower faucet leaking hot water, and told me to "get my head out of my cunt, and start thinking about other things."

Our little beach apartment is ragged. We can’t use the dryer without the risk of having it rip our clothes. There are holes in the walls that resemble oversized flies. Every window is drafty. The shower faucet is just another example of the apartment’s desperate need of repair.

That morning, I scrolled sleepily through Twitter and Facebook before rousing to begin the day. Then I tried taking my mother’s dog out for his walk. However, I accidentally locked myself out of the apartment. Once I got back in, it was too late for a cup of coffee and the dog still had to be walked so he wouldn’t ruin the new carpets…

Needless to say, I forgot about the dripping shower faucet. It was my fault.

My mother discovered my misstep as she walked in the door from work. She was tired and short-tempered. I’m 27 and have lived on my own for nearly 10 years. I shouldn’t need reminders about how to keep a house. I know and make allowances for the fact that she doesn’t like my new boyfriend, and for her to blame a real-or-imagined sex obsession for a minor error in my morning routine.

But the fact remains that I made a small mistake, and she responded with mismatched criticism and cruelty. However, this wasn’t the first time, and surely will not be the last.

I grew up with a father in my life, but the majority of my upbringing was left to my mother, who never wanted children to begin with. Becoming pregnant was a condition of my parents’ marriage, a union my mother pursued diligently, despite my father’s emotional, physical, and sexual abuse.

I have seen pictures of him as a young man, and he was handsome. His smile and stance clearly reveal that he knew and capitalized on it. According to my mother, he traveled often for work, and had a girlfriend in every city. “Landing him” was a boost to her ego, which had been battered after a divorce she did not initiate and, to this day, does not understand. She complied with my father’s demands, and I was born alarmingly soon after they were married.

Despite the devotion he slathered on me, my father never treated my mother with anything but coldness and cruelty. When she asked if she could go out with him after work, he pinned her down and hit her in the face until the skin was bruised and bones were broken. He would pick her up by the throat and slam her against the wall over something similarly trivial. When he tired of the puppy they purchased together, he took his rifle out of the sweater chest and shot it.

My mother escaped when I was an infant. We lived in a battered women’s shelter until she was brave enough to move into her parents’ house, and then into a home of our own. We lived there together until I went away to college. Our relationship was defined more often than not by the same roles: She was the woman broken twice by divorce, and I was the child she had never wanted.

Over the course of years, my mother taught me many things: to walk in heels, to invent silly dances to accompany the songs of the whippoorwills, and how to laugh loudly —all the way from the back of your throat.

She also taught me to never cry during an argument. If you cried, your opponent’s face would change ever so slightly to resemble victory, and you could never come back after that. Weaknesses had to be carefully guarded, because even the ones you loved would use it to hurt you.

She taught me that I was ultimately alone and that if I pushed too hard, she would retreat or push me even further away. Sometimes, as a child, I was banished to my room for afternoons. And no matter how much I apologized or begged for forgiveness (for whatever I did), I was told to be quiet, and for every word I spoke, I would be stuck in isolation longer.

When I was older, she’d tell me to call my father and have him pick me up. I lived with him four times in the course of my high school years, for periods ranging from days to months. The first time I was 15, and what I recall most clearly was sitting in my sophomore English class, making a to-do list:

I never considered that the adults in my life would sort these things out for me.

My mother taught me to guard my feelings, to play games, and to never reveal too much of myself to men. If I showed too much (I surmised from her statements), potential paramours would discover the parts of me that were unlovable, and they would leave.

She taught me that connection, love, and trust might be given, but they could easily and quickly be taken away.

Then there are the moments that undermine all of this.

When she learned about my decision to divorce my husband, she offered me a home. At first, it was only an air mattress on the floor of her consignment shop, but she worked daily and diligently until we had a lease for a place by the beach with a wraparound porch for me to write in the mornings.

Since I was 7 and wrote my first poem, she steadfastly believed in my ability to succeed as a writer, envisioning me with multiple book deals, columns in local papers, and endless streams of essays posted across the Internet — and to this day, will not listen to my cautioning words about the difficulties of making your living with the written word.

She brings clothes home from her shop if she thinks they’ll fit or suit me. We’ve swapped stories and giggles over margaritas, and fight playfully over who has eaten the other’s cookies, candy, or ice cream bars.

These are the beautiful moments that make a fist of guilt in my chest and belly, and tell me I’m a terrible daughter for remembering the rest.

There is so much unresolved between us. We stand in a place where everything is gray: she can insult my wardrobe and in the same breath compliment my work ethic. I’ve been slut-shamed one moment, and the next she’ll suggest renting a cabin for the four of us — me, her, our boyfriends — sometime this winter. I know she’d be proud of me for writing this piece, would fawn over the quality with motherly pride, and then spit venom for the content.

If you like this article, please share it! Your clicks keep us alive!
Tags
mother daughter relationships
parenting
abusive father
frenemy