An Open Letter To My Single Friends 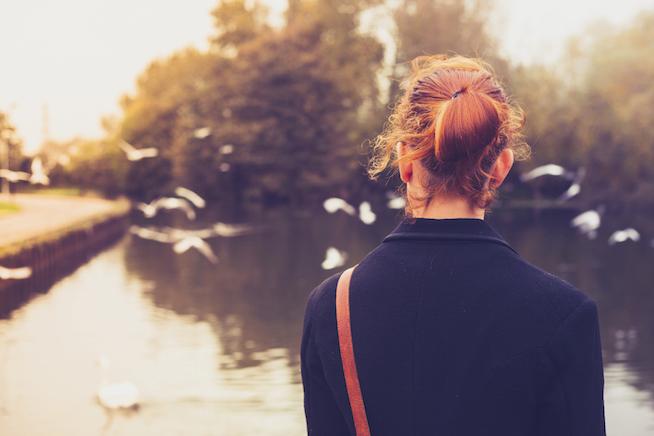 "Love consists of...looking outward together in the same direction."

You meet someone who has potential. You begin to establish a relationship with that person. There’s smooching, maybe fucking, and even a nice dinner or two. But somewhere along the way, 10,000 red flags are waved right in your face.

To My Single Friends (and all the other single people who cry when seeing happy couples at the supermarket):

Last week, my fiancé and I went to spin class, as we do every week (yes, we are that couple). I was surprised to see that the front desk attendant, who usually greets us with a smile and knows us by name, was crying hysterically. My fiancé, a gentleman, handed her a tissue and told her to feel better. Suddenly, her tears multiplied exponentially. I didn’t even have to ask her what was wrong. I could just tell from her reaction to my fiancé’s minor act of human decency: SHE’D JUST HAD A BREAKUP.

And she’s not the only one. The same exact thing happened at barre class (but sans fiancé because he draws the line at grippy socks). Two of my closest friends have also recently broken up. Another is totally en route to Breakupville, but not quite in the Express Lane yet — still wasting her time and energy. It seems I’ve become the Breakup Whisperer, but I’d love to relinquish my title.

Being single when you don't want to be is the worst. Do you avoid logging on to Facebook because you’re fearful of seeing a picture of your freshman year roommate wearing a white gown? Try not to forget that #EmilyEverAfter went through relationships faster than tampons and didn’t have the common decency to put a sock on the doorknob.

If you’re wondering how I have any authority to give you dating advice, let me give you my most major qualification (other than the fact that I’ve made a name for myself writing about sex, love and relationships): While I was living in Los Angeles, I was introduced to a guy who lived in New York. He was the kind of man I always imagined myself with, but we were both about as geographically desirable as Antarctica in March. Although it was a challenge, we made our relationship work. One year to the day we met, he asked me to marry him. And if that weren’t enough, I convinced a life-long New Yorker to move to Los Angeles. If I can do that, there might even be hope for Israel and Palestine. But before I had a ring on my finger, I made every relationship mistake possible, which is probably what you are doing.

Does this also sound like you? You meet someone who has potential. You begin to establish a relationship with that person. There’s smooching, maybe fucking, and even a nice dinner or two. But somewhere along the way, 10,000 red flags are waved right in your face. You question those flags for like 10 minutes over drinks, but at the end of the night you say “Fuck it,” and then go to his place and fuck him. Then all these ooey-gooey love hormones like oxytocin get released. You get attached. Then come the excuses and concessions. But you push on, trying to keep the relationship afloat even though it’s on life support. Then you end up alone, with a pint of ice cream in one hand and a glass of wine in the other. You need to break the cycle and possibly get a vibrator.

We all stay in relationships way past their expiration date because we think that it’s better than being alone. Even more so, you feel like anyone worth your time is already in a relationship, like that cute guy in marketing who is still with the girl he brought to the Christmas party last year. Love isn’t like the muffin selection at Starbucks: it isn’t available on a first come, first serve basis. You aren’t going to end up with a stale bran muffin because you came in around 4:35pm. On that note, does anyone actually like bran muffins? If you really look, there is a delicious cake pop with your name on it! Or a cranberry scone…

If you still don’t believe me, you can take my exes. Really, take them! Before I met my fiancé, I dated some great guys. These men were attractive, respectful, nice, and fun. The main problem was, we just weren’t right for each other, but they were certainly right for someone. If those men were restaurants on Yelp, my reviews would be 4.5 stars and say “It was the most delicious vegan food I ever had. But really, I’d prefer steak.” Remember, one woman’s ex is another woman’s husband.

I learned the most important love advice of my life in 12th grade French class (Merci, Madame Ostrow). While studying the works of Antoine de Saint-Exupéry, I came upon a short quote that, unlike pretty much everything else I learned in high school, stayed in my brain: “Love does not consist of gazing at each other, but in looking outward together in the same direction.” What this means is that you can look at each other all you’d like, go bang, then spend an afternoon hiking together, but if you’re really going to have a future with someone, you need to see the same big picture in front of you. If you see a house and kids and he sees himself as the next Charlie Sheen, run. Also, maybe get checked for STDs.

Being a couple is about achieving the same goals, whether it’s to cook dinner, assemble IKEA furniture, or build a whole big life together. If you aren’t working towards the same goals (or can’t figure out how to use those miniature screwdrivers), then you aren’t with the right person.

We’ve all been there, trying our best with someone who we think will really want a super serious relationship with us, even though within hours of meeting for the first time, they let us know they are just looking for a hookup. You think you can convince someone they want something they don’t? To be frank, love isn’t buying new tires. If someone doesn’t want what you do, if they don’t have the same vision of the future, drive away, stop wasting your time, and find someone else who will (and who can hopefully change your tires and maybe your oil for you).

Here’s something else no one ever wants to say: relationships aren’t actually that hard. Sure, some aspects of even the best relationships can be a challenge (like anything involving sharing a bathroom), but overall, if you are with the right person, the forecast is almost always breezy in Relationshiptown. It shouldn’t be raining and tears 24/7. If you are in a good relationship, the only drama you should have in your life is from watching SVU together every week.

If all of this sounds great to you, but you still aren’t sure if you are dating the right person, just ask yourself this: what can this person do for me? Only date someone who can do something for you. Your partner is just that: a partner. If this person cannot support you emotionally and help you reach your goals in life, then move on. If you are one of those people who likes to take on “projects” or fix things, you should especially ask yourself this question. You should try to do something else that’s totally impossible, like wearing new shoes without getting blisters.

As a formerly single person, I remember what it’s like to be out there, searching to the point of complete exhaustion. You know how you’re out there searching? Wondering if the next person who sends you a letter on a dating site, or that girl over at the adjacent gas pump, or maybe even the guy you always flirts with you at the gym will be the one? You might not realize there is someone looking equally hard to find you, too.

If you like this article, please share it! Your clicks keep us alive!
Tags
single
dating
relationship advice
advice for single people