A Grown-A** Woman Reads Harry Potter: Love In The Time Of Voldemort 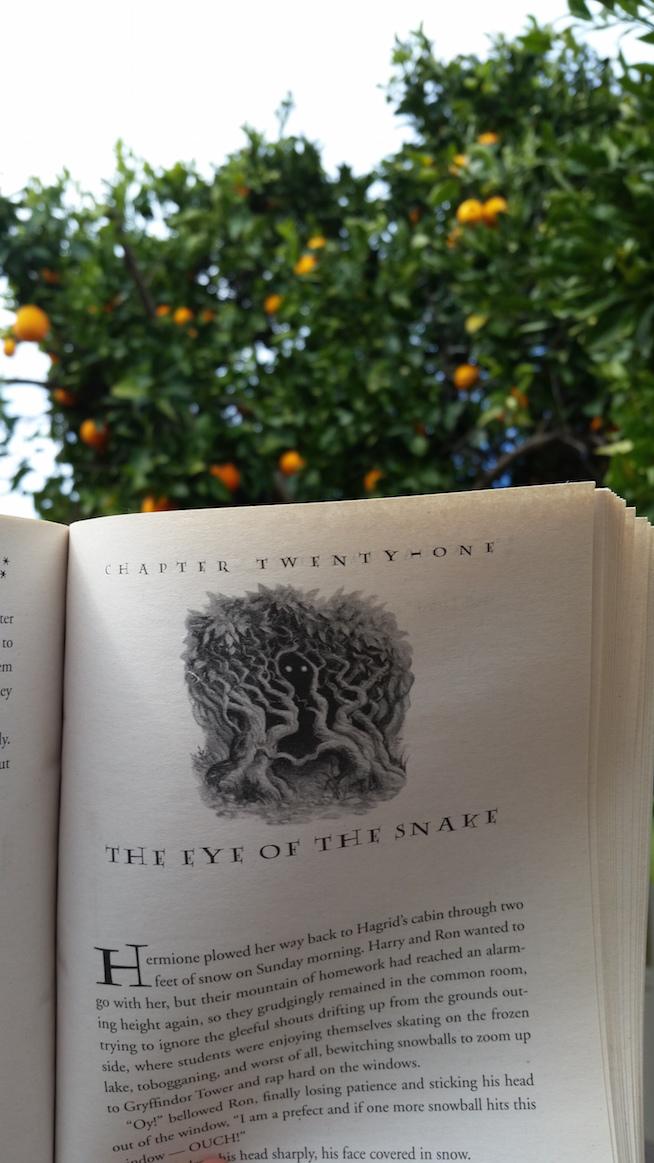 I am worried, though, that my memory has been so spotty and, thus, my attention is starting to wane for the first time. Maybe I really am too old for this.

I’m nearly halfway into Book Five now, and that’s the biggest standout of this one for me. I’m sorry if that’s kind of a cop-out of a topic, but the further I get into this series, the harder time I am having remembering what the eff  has happened so far.

You see, I am an Old Lady. An old lady who is taking SSRIs that are slowly chipping away at her ability to remember things like names, directions, and shit she was literally just talking about.

Rowling is one step ahead of me and plants little nibbles of exposition here and there, but I have zero recollection of most of it. “Wait, the phoenix had a song? Well, OK. If you say so, book.”

I’ve also just never had a great memory for stories and plots, so you’re getting a post about puppy love this month.

Book Five has been slow and mostly boring until a few chapters ago (did I really just read several pages about them cleaning a house? OMG, pick up the pace, Rowling!). Order of the Phoenix, aside from the whole Voldemort-is-back thing, deals with teenage hormones — and rather appropriately.

A few books back, when the Hogwarts kids first started coming into their teen years, I was like, OMG, these kids are so chaste. They’re 14, shouldn’t they be telling dirty jokes they don’t quite understand yet or using the Marauder’s Map to sneak into a professor’s booze stash?

I don’t claim to know what being a teen boy is like, but so far, I feel like any chance Harry and Ron have had to be real 15-year-olds has been replaced with talk of Quidditch.

However, I do know what being a teen girl is like. Boy, do I know. I was 14 in 2001, and I remember that year probably more vividly than any other time in my life. Something about the hormones has positively seared it in sharp definition into my memory. The memories themselves are intense. The crushes (oh, the crushes). The revelatory sleepover gossip. The heat wafting off the pavement during the summer.

What I’m saying is Rowling’s getting closer and closer to getting it right. They’re 15 in this book, but their 15th year feels like my 14th. How Harry positively floats when Hermione basically confirms that Cho is into him. How he is (finally!) so much more comfortable talking back to Draco, teachers, and his friends.

The sensory stimulation of adolescence: The book opens with a heat-choked scene of summer in a suburban backyard. It all brings me right back to a time when crushes were made on people you barely knew but just kind of decided to “like,” and how the fact that they so much as glanced at you — however accidentally — in science class could be the highlight of your week and a legitimate sign of progress.

And besides, I’ve heard from my friend Tom (who has now joined me in this caper and is audio-booking the series alongside me) that Rowling does a great job capturing teenage boyhood. So maybe I was just some kind of preteen miscreant and I have a skewed idea of what 14-year-olds do for fun.

Speaking of female Quidditch players like Cho (BTW, my girl Cho is finally starting to develop a personality! That only took two books and a few thousand pages…): My feminist prayers have been answered in the form of Angelina Johnson.

And lord knows how she had the willpower NOT to claw Pansy Parkinson’s face off after that comment about her hair (I’M SORRY PANSY WAS THAT A CRACK AT ANGELINA’S BRAIDS?), though I still would have supported her if she had.

I still don’t know all that much about her, other than the fact that she takes Quidditch very seriously — but she is a supporting character. Supporting characters generally don’t get fleshed out as much as mains, so I don’t think her lack of flair thus far is because she’s a woman. I’ll take it.

I am worried, though, that my memory has been so spotty and, thus, my attention is starting to wane for the first time. Maybe I really am too old for this.

Sometimes I feel like I am reading way too deep into things just to prevent myself from regretting this project. Like Harry’s scars from his detentions with Umbridge — the immense shame and unwillingness he has to talk about something everyone around him can clearly see struck me as a strong parallel for mental illness, and how hard it is to just talk about it, even to the people that care about you.

Then again, if you’ve been abused, you probably found a parallel in those scars. If you’ve self-harmed, you might have, too. If you came from poverty, you might see those scars as your stained hand-me-downs and free lunch. If you’ve ever had secrets, you probably found something comforting in these books, even if you were too young to understand why.

I guess it’s like how I can always find the solace I’m looking for in The Wizard of Oz — I never grew out of it because it grew with me.

My money’s on Umbridge as this book’s villain. Or maybe Voldemort in disguise. Stay tuned…

PS: ROAD TRIP TO UNIVERSAL STUDIOS. Who’s coming with me?

Favorite Character: Angelina all the way. I have no athletic skill whatsoever, but I wanna be her BFF.

Least Favorite Character: OK, so this isn’t a character, but I’m very insulted by the depiction of the press in Harry Potter. I’ve noticed this in other films, songs, and stories to come out of Britain — they seem to have a very cynical view of journalists over there. I’ll admit some of us are jerks, but jeez, we’re not all monsters! Some of us still care about silly things like ethics and truth, thank you very much.

Quote: “October extinguished itself in a rush of howling winds and driving rain and November arrived, cold as frozen iron, with hard frosts every morning and icy drafts that bit at exposed hands and faces.”

If you like this article, please share it! Your clicks keep us alive!
Tags
Harry Potter
Books
SSRI
boyhood
teens
AGAWRHP