A Love Letter To Those Whose Periods Make Them Cry 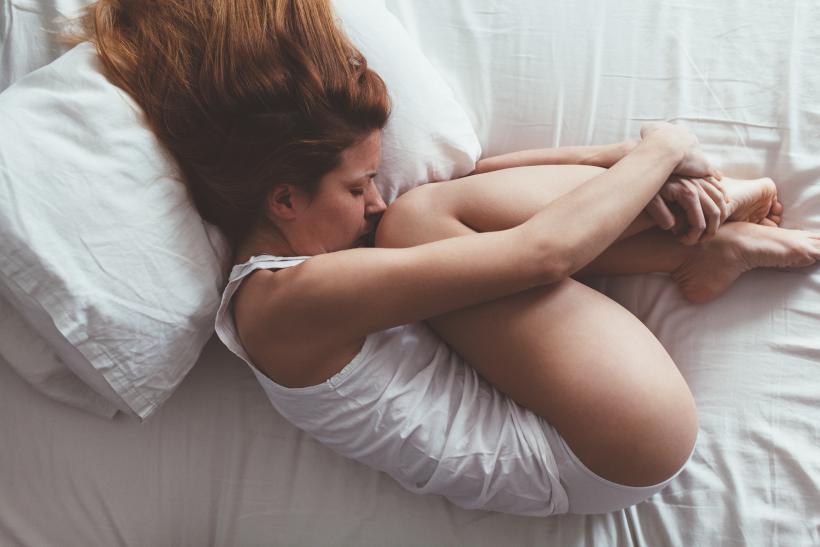 There are so many of us who look at blood-drenched underwear and see nothing but hurt. Image: Thinkstock.

One of my earliest memories is one where I’m eating freshly-made French fries.

I’m probably 2. My hands are flapping about and they land in ketchup. My fingers are coated in it, and I’m mesmerized by the thick texture. I spread my fingers out in front of me and watch the ketchup collect at the confluence. I look like I have webbed hands, like the ducks at the park.

Now, at the ripe age of 21, I sit again, staring a different thick, red goo collecting between my fingers, one that makes tears collect in the corners of my eyes.

This time, it’s not ketchup — it’s my period.

A few weeks earlier, I had a miscarriage.

I suppose the story begins when I noticed that my breasts were swollen and when my period-tracking app (thank goodness for those, right?) notified me that my period was late.

“Oh,” I said out loud, while staring at my first positive pregnancy test. “Well, shit.”

I struggle to react appropriately to shocking news.

Prior to this, he was nobody of particular importance to me: just someone I did the things with once and greeted on occasion. For all intents and purposes, he was similar to most of the men I slept with. He was tall, thin, studying things that bored me — sweet, but not someone I could imagine dating.

A few anxious messages were sent and, minutes later, he sat on my bed.

We discussed what we were going to do. I was not opposed to abortion, but truthfully, I was being carried away by my imagination, prematurely meditating on the joy of motherhood, and praying for a happy baby with chubby cheeks. I was emotionally invested in an idea of what motherhood would be like, even with all its difficulties and flaws, even if I had to do it alone.

“You don’t have to be involved if you don’t want to,” I told him while I drank my 12th cup of water that day, waiting to produce the 11th pregnancy test that week.

For the first time, I thought I just might not be alone in this after all: Here was someone who was just as involved and as screwed as I was.

Its creation coincides with the development of a fast-growing movement towards destigmatizing menstruation. Last year Kiran Gandhi made headlines for running the London marathon without a tampon, bleeding openly to fight against the stigma of menstruation. A great number of people/activists have spoken against the “tampon tax” and called for menstrual products to be made more affordable or provided for free. Discussions about periods have become less taboo thanks to communities on platforms like Tumblr and Instagram.

For many people, the world is becoming an easier place in which to menstruate. That’s great.

But what about those whose periods make them cry?

What about trans men and non-binary people who menstruate and feel misgendered every time we say periods are a woman thing? What about people suffering from endometriosis, polycystic ovarian syndrome, fibromyalgia, and the many other illnesses that make menstruating all the more painful? What about those who have pre-menstrual dysphoric disorder? What about trans women who are made to feel like unwhole women because they do not menstruate?

What about those of us who look at bloody toilets like they’re ceramic graves for our not-quite-yet infants?

There is a binary drawn between people who love menstruation and people who stigmatize it, but that binary is false.

Plenty of period-positive activists point out that the beauty of menstrual blood is that it’s the only blood that doesn’t arise out of trauma.

What we discuss less often is the ability of menstrual blood to induce trauma.

For many of us, it feels like we’re suspended somewhere between a place of shame and hurt. The period-positive movement has yet to accept us and our traumas, our pain, our valid hate of menstruation, and the way we discuss it. We need some space where we’re able to hate or loathe or cry at our periods out in the open without being accused of period-shaming. We need to be able to burst into tears at the sign of spotting without feeling like we’re archaic and overly conservative.

I feel some kind of jealousy towards those who are able to reclaim their bodies through painting with menstrual blood or having mind-blowing period sex. If I could, I would be the person who giggles nonchalantly when bloody stains appear on my pants, and then asks out loud if anyone has a tampon. But unfortunately, it’s hard to embrace menstruation when you’re dizzied by the trauma of stolen parenthood.

My pregnancy tried to brake at a traffic light when it was going 80 miles an hour and I, absorbed by images of a small child running barefoot on dew-drenched grass, was flung forward and through the windshield.

My miscarriage wasn’t the clarity of salty tears running down my face. I honestly haven’t yet cried about it, and not for lack of trying. Instead, it was bright red and burnt umber and every hue in between. It soaked up underwear and pajamas that needed to be thrown out. It was the fluorescent-lit, whiter-than-white shade of a doctor’s coat that told me that I had, indeed, miscarried.

I wiped down a bloody pregnancy test and took it to him. Something about the experience reminded me of handing my work to a teacher and watching her mark it.

As a pale minus sign formed on the little white window, he gave an assessment. “Cool. This is in the past,” he declared.

Earlier that week, he insisted on coming with me to get my blood tests back from the doctor. My appointment was that day, so I later I texted him to ask if he still wanted to come with. I explained that I wanted to know for sure whether I was ever pregnant, even though every bone in me knew that I was.

Whatever the doctor says, I don’t know and I don’t care, he texted back.

He was the first person in a long time whom I wanted to hurt.

I thought we were in the same boat, but he was standing on the shore the entire time, nonchalant, watching me bail water.

Instead, I just felt pathetic and wished him well for his upcoming tests.

I don’t think we spoke after that.

To those whose periods make them cry:

There are so many of us who look at blood-drenched underwear and see nothing but hurt. Some are reminded of being misgendered or feeling mind-numbing amounts of physical pain. Some gaze between their legs and all they can see is a fetus.

There is a binary drawn between people who love menstruation and people who stigmatize it, but that binary is false.

We’re not a part of the problem simply because we feel what we feel, and a movement that makes space for people to love menstruating needs to make space for us to hate it, too.

One day, I’ll be a mother to a small human who fits onto the crook of my hip like a puzzle piece, and they will breathe the breaths of all my children who never had the chance to live. They’ll run barefooted on dew-drenched grass and watch the ducks at the park as I once did.

I hope that ketchup is the only thick red goo that ever makes them cry.