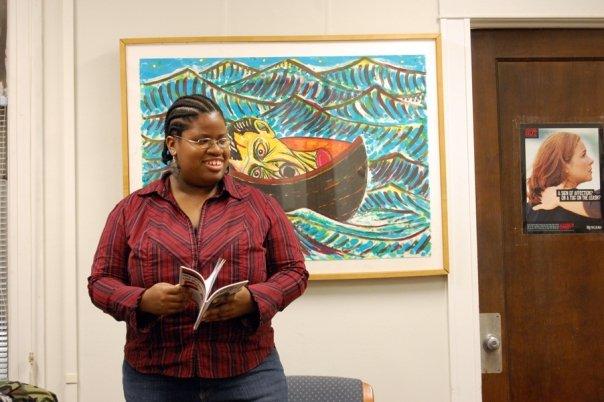 "We’re painfully aware of the fact that we’re “the only one” in the room, or one of very few. Don’t make it worse." Image: Author

I had been invited to dinner. I was an undergrad creating new community with awesome radical activists.

I looked forward to free food, free booze, meeting new people, and being around my crush.

I was the only Black person there — and one of very few people of color.

One young white man decided to tell a story. It was a story that led to him referring to rap music as “crap,” among other things.

Suddenly, literally all eyes were on me.

It’s like being a deer in the headlights. You’re in imminent danger. You know it. But you can’t move. You can’t speak. No reaction whatsoever. You just stand or sit there, frozen in time, waiting for the crash.

Okay maybe it’s not that dramatic all the time, but I’ve been the only Black person (or person of color in general) in a room enough times to understand the feeling of being a token.

When your difference is both on display and the elephant in the room, the spotlight is on you.

You’ve got three choices: Slink really low into your chair wishing you were actually invisible; laugh it off, lulling your clueless extended family, friends, or acquaintances into a false sense of confidence, thinking, It’s OK for me to do this!; or speak up and be the Angry Black Person/Social Justice Warrior who never shuts up about all the things that are wrong in the world. (Lighten up!)

To be clear, you don’t have to be the only one of your identity group in a space to be tokenized.

Likewise, being “the only one” in a space doesn’t necessarily mean that you will be or that your invitation to the space is tokenizing in and of itself.

However, in my experience, being the only one (or one of few) and being tokenized often go hand-in-hand.

If you’re at all familiar with my work (or you decide to do a quick Google search), you might think I’m a hypocrite for writing this. After all, much of my writing is about my many marginalized identities: Black, woman, bisexual, poor, multiply disabled, and fat (plus polyamorous and kinky).

But there’s a difference between me choosing to talk about my own unique experiences, giving visibility to the issues that my various communities battle on a daily basis, always recognizing my humanity in all its complexity, and someone else — usually a mere acquaintance or stranger — reducing my existence to one part of me.

In many cases, tokenism comes from a well-intentioned place but, as the old saying goes, the road to hell is paved with good intentions.

And that’s not even all that tokenizing does. It reduces my existence to one part of me, and the part I become is deconstructed. I become a part of a part of myself. I become rap music. I become my skin. I become my hair.

I become a glorified stereotype.

Just being invited into a space can be a form of tokenizing — that’s often how “diversity initiatives” work: We’re gonna hire/invite/include this one person because they’re X, without taking who they are as a person into account or really caring about it.

In addition, I find that when you’re the only one (or one of few), it makes it that much easier for privileged people to take the opportunity, intentionally or not, to tokenize: We want to engage you, but we have no idea what we’re doing, so let’s talk about hip hop with the sole Black person!

In my personal experiences with being tokenized, I’ve usually become the deer in headlights, fear, shock, or embarrassment gripping me so tightly that I don’t know what else to do but sit there.

In many cases, tokenism comes from a well-intentioned place, but as the old saying goes, the road to hell is paved with good intentions.

As has been written before, “good intention” isn’t magical fairy dust. It doesn’t undo the harm that has been caused.

Maybe you’ve read up to this point and you’re wondering, “Well, what can I do? How can I not be that person?”

I have a few suggestions:

1) See someone who appears to be Black, Asian, Latinx, Arab, etc.? Make sure the first thing you say to them is “Welcome!” or “What’s your name?”

The first thing that spills out of your mouth shouldn’t be “OMG DO YOU TAN TOO?” (Yes, that really happened to me.)

And no casually “wondering” where someone is really from. The same goes for disabled people and people who read as transgender or queer (especially since you can’t tell by looking at someone whether or not they identify as such, in this case).

We’re painfully aware of the fact that we’re “the only one” in the room, or one of very few.

2) Ask yourself: Why am I saying this?

If not, you’re likely doing it just because the person with whom you’re speaking looks a certain way. Don’t do that, my friend.

If so, great! Maybe you’ll have something in common. But then again, maybe not. No group of people is a monolith. We don’t all like, know, or have experience with the same things, for a lot of reasons.

So don’t lead with it, mmkay?

As I said above, we’re already painfully aware that we’re the only one in the room. Don’t make it worse. Don’t contribute to daily microaggressions that exacerbate our oppression.

3) And finally, try to make a genuine, natural effort to work and socialize with people who are different from you.

Make sure it’s in fact genuine, not a forced, Let-me-get-my-diversity-checklist-sorted-out effort.

We know the difference.

Remember, no one is obligated to be your friend; not everyone will be receptive to your efforts.

But, where there are successes, you’ll find that people of color (and anyone of marginalized difference) are human beings just like you, with likes and dislikes, hobbies, preferences, dreams, and struggles.

The more you’re around us, the more you see our similarities, and the less we become objects.

Because, you know, that’s what a token is — an object, not a person.

I hope this helps.

Next time you come across a deer, slow down and let it cross.