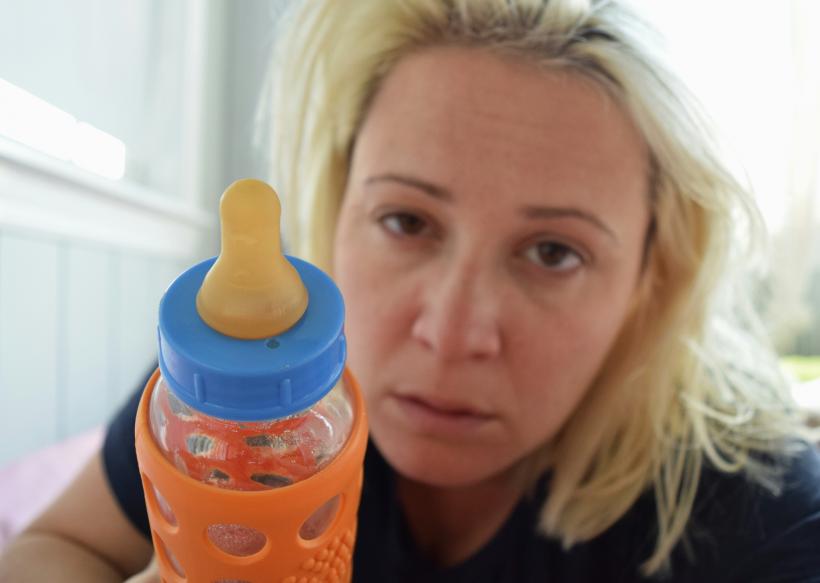 I’m tired, y’all. Just bone tired. There is not enough coffee in the world for how I feel right now. I’m so beat that I’d even consider a cocaine habit to get through the pile of laundry quicker if not for, well, cocaine. I’m 39 years old and have two kids, a 4-year-old and a 1-year-old. Two kids. Just two. It seems like so few. On the scale of number of children you can have, two isn’t many. It’s close to the bottom. Right next to one child and zero children.

But they kick my ass. I have no idea how people with big families have the energy to do so much parenting. Four kids? Five? Those parents are rockstars. I’m Barry Manilow to their Led Zeppelin. Linda Ronstadt to their Janis Joplin. I’m Zamfir, Master of the Panflute and they are Miles Davis.

When I was pregnant with my now 1-year-old, I was considered “Advanced Maternal Age” because I was 37 when he was conceived. I was pretty up in arms about that at the beginning. “Advanced maternal age?? Pshaw! I got this." I didn’t feel old. I took it up as my mission to prove that AMA didn’t make me old. I was just as able to gestate successfully as a 27-year-old. I would carry the shit out of that baby. I went to the gym, I gardened, I was slaying pregnancy. Age is just a number, amirite?

I was lying my ass off.

That pregnancy kicked my ass. Hard. I was miserable. Every part of every one of my parts hurt, like a deep, down body-ache. My entire being felt like I’d been kicked by a horse, right down into my soul, for 9 (it’s really 10) months. I wanted so badly to be that glowing, mama goddess of a pregnant woman. I wanted to exude femininity. Instead, I exuded sweat and oil. It was the longest 9 (it’s really 10) months of my life, second only to when I was pregnant with my now 4-year-old.

There was nothing remotely feminine or goddess-like about my pregnancy. I was swollen and broken out like a 15-year-old boy. I had to give myself progesterone injections every week for 20 weeks. A two inch needle in the thigh. Every. Week. For. Twenty. Weeks.

I see mamas in their 20s schlepping around with stairstep kids, and I’m in awe. I can barely get dressed in the morning, and they’re at the zoo with four kids under age 5, back to their college weight, looking amazing.

Then, finally, I had the baby, and my God, that was awful. I wanted to have this amazing, beautiful, empowering birth. But that was dumb, because having a baby, while amazing, really freaking hurts. It’s beautiful in theory, but in practice it’s messy and smelly and tears you down to your most basic primal nature... which, in my case, was a sniveling wuss who begged for drugs and prayed to every deity I could think of to deliver me from my torment.

Once the bundle of joy was expelled from my vagina, though, that’s when shit got real for this AMA mama. I had a three-year-old at home, which was already exhausting enough, but I didn’t anticipate just how much more difficult everything is with an additional person to care for. It kicked my ass, for real.

Everything was so much harder than when my 3-year-old was a baby. I had NO energy. All I wanted to do was sit. I became a slug who only nursed her baby and watched TV, while leaving my three-year-old to his own devices. I fed him, of course, and saw to his basic daily needs, but we didn’t do anything even remotely enriching for months after the baby came. I was far too concerned with my hemorrhoid cushion and tucks pads to even think about making lavender-scented play dough or themed sensory bins. I couldn’t even get off the sofa.

I see mamas in their 20s schlepping around with stairstep kids, and I’m in awe. I can barely get dressed in the morning, and they’re at the zoo with four kids under age 5, back to their college weight, looking amazing. I’m over here in yesterday’s yoga pants with a legitimately messy bun and crumbs in my bra. Because I’m just too damned tired to care.

I feel like if I’d started earlier, had my first kid at 28 instead of 34, maybe I’d be a little less tired right now. Maybe I’d be a more fun mom if my knees didn’t sound like small arms fire every time I tried to run with my son.

Maybe I’d be a better mom if I was younger. But I don’t think so. My kids? They’re awesome. And I’m the mom they have, so I must be doing something right, old or not.

If you like this article, please share it! Your clicks keep us alive!
Tags
pregnancy
parenting
maternal age
AMA
tired