9 Months Of Fattitude: The Making Of A Body-Positive Badass 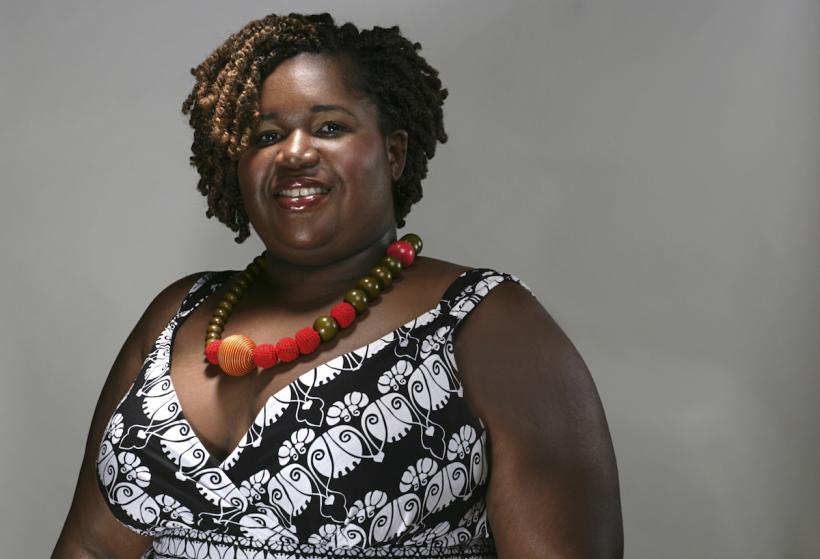 My introduction to the fat-acceptance and body-positive communities nine months ago (by way of my life-changing internship with Fattitude the Movie) left me speechless.

I didn’t have a clue that social movements like this existed — it felt as if I’d discovered the lost city of Atlantis! I quickly started following body-positive icons and media outlets, reading their posts and blogs every day.

I slowly began to let myself imagine how it would feel to truly love and accept my own fat body, to stop dieting, to stop feeling like an unlovable failure, to reverse all of this diet industry brainwashing (after I understood that that is, indeed, what it is). I wondered how would I feel if I really loved and accepted my body as perfect, right now.

But there was a problem: Could I really feel like those body-positive icons? They all have lovable fat bodies; they are all super-cool, confident badasses.

I could hang out on the sidelines and cheer, but sooner or later, wouldn’t they realize that I was an imposter?

The shaming, lies, and poisonous cultural standards are so deeply ingrained, the disordered relationship with food and my body started so long ago: How could I reverse that? Is it even possible? Can I really be “healthy” and “happy” while living in my fat body?

My entire life I’ve been told, over and over again by everyone from the media, to doctors, to family members, and even strangers that fat is bad:

“Having a fat body is something to be ashamed of.”

“It’s irresponsible and leads to an early grave.”

“Melissa, you have such a pretty face, but with that fat body, you’ll never find a good man to love you.”

I didn’t think that my disordered, fatphobic mindset could be rewired — until, one day, I realized that that very thing had happened. Somehow the new ideas had broken through!

There is still work to be done, but by re-educating myself, making a priceless network of body-positive friends, and upgrading my media influence, I am on the right path.

Re-education has been at times painfully enlightening, but, overall, liberating. The most difficult false belief for me to amend is that I am a failure as a human being for being fat. We are told that we have failed — failed to lose weight, lacked the willpower to diet, fell back into our old “gluttonous, lazy” ways.

In reality, the only failure is that of the multi-billion dollar weight loss industry. They toss us up in the air like volleyballs — callously preying on our deepest desires and greatest insecurities (which they helped create in the first place) — only to set us up over and over to be spiked into the sand.

It's all around us, infiltrating our innermost thoughts and relationships. How could we not fall victim?

But, my love, it’s simply not true. Your fat body is perfectly lovely right now.

Despite what you are told repeatedly, there is nothing wrong with you. You are not a disease, you are not an epidemic, and you most emphatically don't deserve to have a war declared on you.

We consciously have to fight diet culture and the lies we hear about fat bodies every day. We actively take precautions, like switching the channel during commercials, flipping past magazine ads, carefully choosing TV shows to watch, and (for many of us) depending on earbuds to drown out office diet talk.

Immerse yourself in body-positive media outlets like Bustle and Ravishly, and spend time looking at diverse bodies. The more I see and appreciate other fat bodies, and tear down my own phobia, the more I intrinsically know that all bodies deserve love, even my own.

In hopes that it may help you too, I want to share several truths that have changed my own body acceptance:

We’re not all supposed to be the same size, and we’re not bad for being a bigger or smaller size than someone else.

2. Body size isn’t an accurate indicator of health, and health shouldn't be a prerequisite for dignity and respect.

In spite of all the crappy messages with which we are bombarded, fat bodies most certainly can be healthy bodies. Let’s not forget to question who funds these “fat kills” studies and what their motives are!

Besides, it seems logical to me that if we value our bodies and are treated respectfully (despite the world telling us we don’t deserve it), we will naturally engage in self-care.

3. Unless someone is a human x-ray machine, they cannot tell anything about a person’s health or well being just by looking at them.

And really, if one possess superhuman talents, they probably have better things to do than fat-shame.

4. Foods aren’t “good” or “bad” and meals shouldn’t be a moral decision!

It’s all relative, and normalized eating for me is all about my food tasting and feeling good.

5. People are attracted to various bodies — and (more importantly) to the beings within those forms.

I don’t need to be a certain size or compensate for being fat to be loved. I will no longer atone for my fatness and not measuring up to some arbitrary beauty standard.

I know that the right man will love all of me because of the fact that I'm a fat woman, not despite it.

6. It’s my right to speak up when I feel uncomfortable with a conversation or questions asked.

My weight, my clothes size, and what I eat isn’t anyone’s business but mine. I no longer feel the need to qualify or answer someone who asks me if I’ve lost weight or what my diet is.

And if someone doesn’t like it? I tell them, “I’m a little teapot, short and stout, and if you don’t like it, you can kiss my spout!”

* (Statistically, most people would rather be dead than fat).

If you like this article, please share it! Your clicks keep us alive!
Tags
body image
body positivity
fat acceptance
Fattitude
Lindsey Averill

9 Months Of Fattitude: The Making Of A Body-Positive Badass
Melissa Mazza