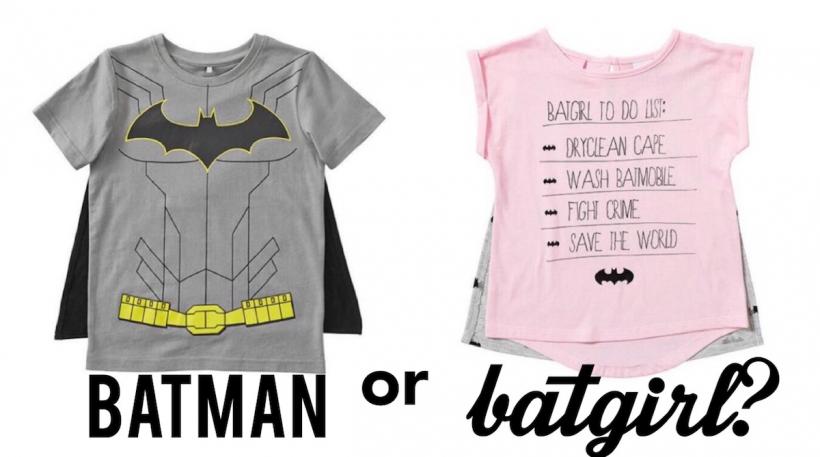 In what world would a superhero's priorities be in this order?

Recently Target Australia marketed a “boys” and “girls” version of a Batman shirt, created for kids aged one to seven.

In flash of the obvious that I shouldn’t have to type, this shirt doesn’t require a different version for girls. But, Target Australia didn’t let that stop them- they went ahead and made one anyway.

You may be assuming that we’re going to be seeing pink, and if so, then you are partially correct. But they took that gender stereotyping and walked it right off a cliff. Instead of the logo and belt, the Batgirl shirt has a four item to-do list:

This is not a joke.

No, you didn’t accidentally click on The Onion. This is a real thing that happened. They even used little Batman logos as bullet points for the list.

This is misogynistic and messed up, and we’ll get to that in a minute. But first, I feel like we need to talk about how impractical this is, starting with asking in what world would a superhero's priorities be in this order?

Also, what fabric is the cape made of that it’s dry clean only? That’s just terrible staff work.

I mean, if you want to ignore the “NO CAPES!” rule made clear by The Incredibles, you do so at your own peril, but who has time to dry clean their cape? Wash and wear people. Wash. And. Wear.

Okay, now that I’ve got that out of my system, let’s talk about what happened here. Predictably, people found this mess online, shared it on social media, and whipped up a slew of well-justified outrage.

Under pressure to not be misogynist asses, Target Australia pulled the shirt, and then posted on Facebook that it was not their “intention to offend our customers with this item.”

This isn’t about whether an individual person likes housework, it’s about the way that we gender young children, and then pile misogynistic gendered expectations on them.

Someone has to tell me how companies are still giving this weak ass non-apology and thinking it’s ok? Here’s an idea, I mean I’m just spit-balling here, but what if when companies screwed up they said so, apologized, and then did better moving forward.

I could go my whole life without hearing “we didn’t intend to offend,” because who cares?  Do they seriously think they get points for not trying to offend people? Is the bar for responsibility so low that if you do something horribly offensive, but you say you didn’t intend to, then we’re all cool?

What if instead of behaving like what they intended is more important than what they did, they just said “We screwed up, we’re sorry, we won’t do it again.” Seriously PR people, you have my permission to use this for free, I’d almost pay you to use it and stop with the “we didn’t intend to be as obviously and clearly offensive as we were” crap.

Which leads us to my biggest question: how did this happen in the first place?

From the designer of these clothes, to the manufacturer, to the buyer for Target Australia, to the merchandiser who put them on the shelves, to the photographer who took the picture, to the developer who posted them on the internet, and everyone else who saw it along the way, nobody – not a single person – thought that it might be a bad idea to make a “girl” version of the shirt that put cleaning ahead of crime fighting.

Nobody? No one at all? Bueller?

It’s not like this is the first time this has happened.

I thought that the problems here would have been crystal clear, but to make matters worse some women are suggesting that this is fine, posting things on social media like “I don’t see the problem. I, for one, like housework.”

If you like housework – whatever your gender - that’s fine, wash all day and dry all night. I salute you. But understand that it has actually nothing to do with this.

This isn’t about whether an individual person likes housework, it’s about the way that we gender young children, and then pile misogynistic gendered expectations on them. It’s about the fact that Target Australia supports a world where someone puts up the bat signal and Batboy is ready to go fight crime with his uniform and belt, but Batgirl is at home washing the car.

What the crap?  Also, are we to assume that Batgirl can’t even keep four items in her pretty little head, but Batboy knows what needs to get done – which is why they didn’t write a damn to-do list on his shirt?

Kids of all genders should have the opportunity to explore the world and find out who they are and what they like, rather than having it dictated to them by sexist onesies  and stereotyping t-shirts.

If we want to empower kids to believe that they can do whatever, and be whoever, they want, then it would probably be better if we didn’t indoctrinate them otherwise at every opportunity.

If you like this article, please share it! Your clicks keep us alive!
Tags
target
superhero
housework
Batman
feminism
sexism
gender roles