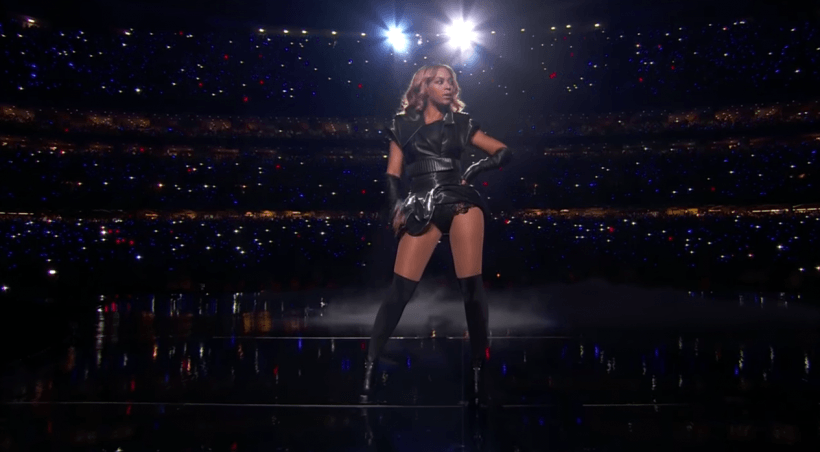 ...she is fresh out of fucks to give.

Oh Ravishers, for the first time, I am at a complete loss for words — but watch how a full page of me having no words is about to appear on your screen.

Beyoncé. Bey. Queen B. The Queen.

She unleashed a whole new level of #BlackGirlMagic that I did not even realize I needed. And honey, if I didn't realize I needed it, you know the world wasn’t ready. With the secret drop of "FORMATION," Beyoncé simultaneously punched you in the gut, kissed you on the mouth, and made you say, “Thank you, Bey. Thank you.” She did exactly what she said in her song — she went off...she went hard..because she’s a star.

There has often been talk about how Auntie Bey and Uncle Jay (I’ll be referring to them as such from here on out) have been silent around issues relating to the Black community — never speaking out publicly, never appearing in celebrity-heavy telethons, never posting on social media about how much money they gave here or there. Because of this, people believe they simply don’t care. And Auntie and Uncle, in true “I ain’t got time for y’all” fashion, stayed quiet, never addressing the naysayers.

And then, on a warm Saturday afternoon, while folks were busy running their mouths, with their, "Why does Beyoncé need to do the Super Bowl again?? Ugh. Let someone else do it!” She let them know in one line.

(Here's the video in case you missed it. I can't embed it because the NFL will get really upset)

And in case that didn’t rattle you enough, she went on to remind you that YES, she is BLACK. She is Black mixed with more Black — just in case you weren’t sure.

You mix that negro with that Creole make a Texas bama

She let you know that she heard folks talking about Blue Ivy’s hair — and yes, Blue Ivy is Black too. Baby 'fro and all.

I like my baby hair, with baby hair and afros

She has a “Black” nose. Deal with it.

I like my negro nose with Jackson Five nostrils’

And basically, she is fresh out of fucks to give. As she says in her lyrics — and proved during the Halftime Show of the Super Bowl — she slays.

I stunt, yeah, yellow bone it

I dream it, I work hard

I grind 'til I own it

I twirl on them haters

El Camino with the seat low

Sippin' Cuervo with no chaser

Sometimes I go off, I go off

I go hard, I go hard

Now, let’s talk about that halftime show for a minute because there are a lot of people up in arms about her performance. Just this morning I woke up to some lovely hate speech on a post I made on Facebook regarding my love for Bey and her glorious back up dancers. Here is the post. 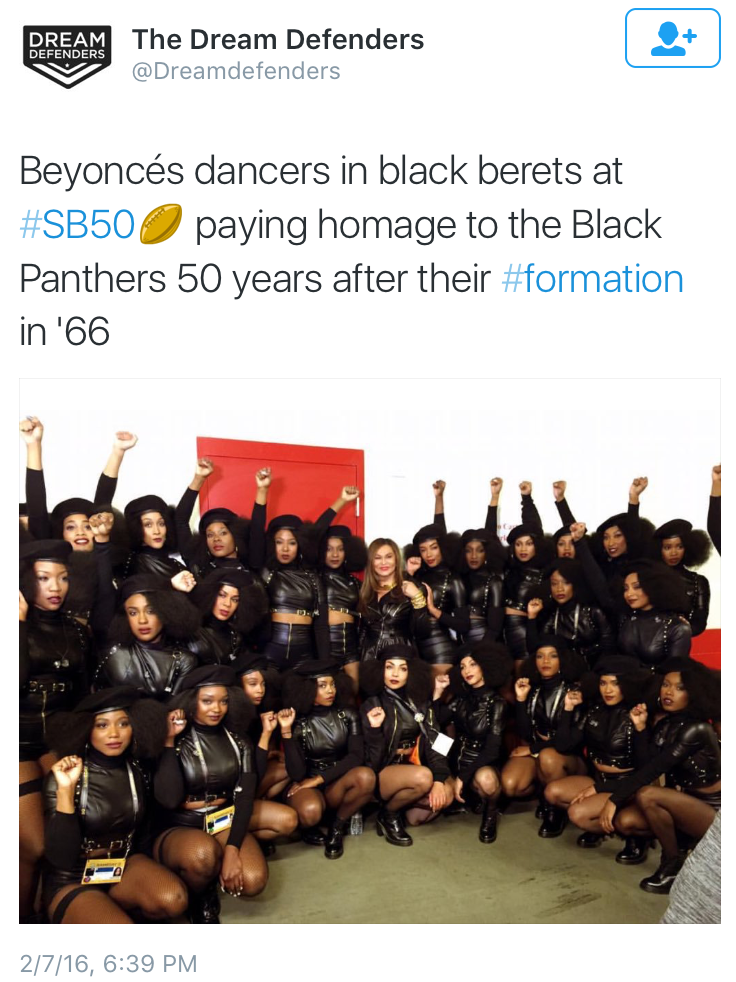 And here are the comments that followed:

"Ok so don't gripe when a white person uses the "n" word because this sorry excuse of a human called white people albino alligators. She's nasty and teaching girls oh just shake your butt and be sexual. It was sick she should never be allowed back. It is one thing to be proud of who you are I am all about individuality and pride of skin color, but she is racist through and through. Not ok to hate on another skin color."

Which was then followed by this statement, by the same person:

"If a white band went backstage with white dancers and posted with KKK paraphernalia you would be angry, people would be rioting. So why is it we can't be upset that they post a pic of a group that openly tells people to kill whites and cops. It is offensive period and the racism is gross."

So yeah…. let’s unpack this backpack a little bit.

Yes. Beyoncé​​’s backup dancers were all dressed as members of the Black Panther Party (For Self Defense)  (please click on that link and find out exactly what the party was about before you start screaming racism, or even worse, imaginary reverse racism).

In case you didn’t know, 2016 marks the 50th anniversary of the formation of the Black Panther Party — the party, who in the face of police brutality, fear mongering, and legalized murder, stood up for the members of their communities, enacted their legal right to open carry guns, created countless community programs, and policed the police since the government refused to. Also, because of this, many of their leaders were systematically and “legally” murdered by the Federal Bureau of Investigations.

So, commemorate and give thanks to the men and women who literally gave their lives to save lives when no one else wanted to? Yes. Bey is here for that all day.

Bey and her dancers formed an “X” when they were dancing, honoring Malcolm X.

To this all I can say is, “AND?” Malcolm X was just as important to the Civil Rights Movement as Dr. Martin Luther King Jr. Yes, they had different tactics, but their end goals were the same. To quote SocialistAlternative.org, “Malcolm X saw the limitations of both the Muslims and King’s strategy of non-violence. He saw the need to embrace the social and economic issues and he attempted to put forward a more coherent strategy than any Black leader up to that point.”

*Blink. Blink.* I’m just going to wait here for a minute so someone can tell me why that shouldn’t be celebrated. If you know, tell me because maybe you know something I don’t, which is entirely possible. I am down for respectful dialog.

I actually saw this gripe on another feed. Prince has something he’d like to say in response to this statement. 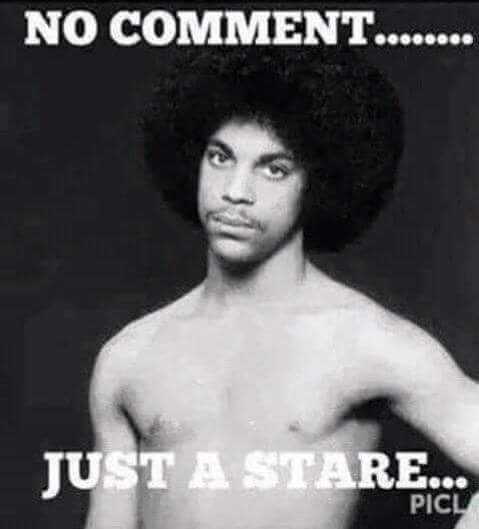 So yes, Auntie Bey is here all damn day for her folks. She called us to attention.

She’s telling us to get it together and take care of our own, if the world won’t.

"Prove to me you got some coordination."

If you like this article, please share it! Your clicks keep us alive!
Tags
Beyonce
superbowl
racism
formation