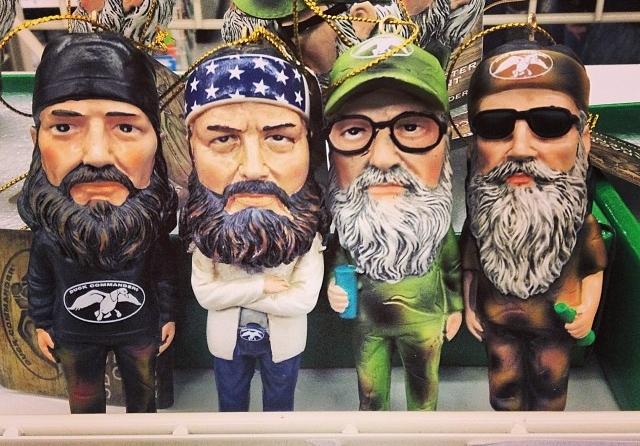 Four years ago, my husband took a job transfer to Bogota, Colombia. Initially skeptical of the place (splashed across my immediate imagination: The FARC, Cocaine, Escobar, Proof of Life), I fell in love with the city just about upon arrival, a lovely tale for another time.

Today, after reading a New York Times article on the TV-to-politics pipeline, I was remembering all the nights in Colombia that my husband and I watched dubbed TV shows, the selection of which was extremely limited. We became reliable fans of Quien de Mas? the Spanish title for Storage Wars. (Sidenote: “Quien de mas” translates roughly as “Who’s the man?” which seems more jovial – and more fitting – than the lazy “____ Wars” trope.)

Anyway, we were also occasional watchers of Duck Dynasty. Now, if I were living in America, with access to the hundreds of scheduled and on-demand programs available to us lucky Yankees, I would not have willingly chosen to watch a reality show about the Robertson family, of Duck Commander fame. I don’t hunt, I don’t really like reality shows in general (Quien de mas? notwithstanding), and I’m not a fan of wizard-length beards.

But we didn’t have much choice. My Spanish skills were pitiful, and English options came few and far between. Not to mention, there is no such thing as unlimited WiFi in Colombia – you pay per minute, and I needed that access for my daytime work, more than we needed it for spotty, often-interrupted Amazon streaming. So we watched a few episodes, here and there, of the Louisiana family who turned Southern duck hunting into a lifestyle brand.

According to the New York Times, this means that, should the election have occurred in 2013, I’d be a Trump voter. (Oh. No.)

Yet allow me to argue a bit with the premise of the New York Times here. Because it shows a sort of stunning lack of intellectual curiosity, that we Americans are falling so predictably into cultural camps of belonging.

Yes, the correlation between Duck Dynasty and Trump support is the strongest of any of the 50 television shows they tracked, linking Facebook likes to different regions of the country.

And it initially seems to make sense that a show like Duck Dynasty finds few fans in urban centers like New York or Los Angeles. The Robertson family embarks on some truly colloquial quests, such as frog hunting, featured in an episode that refuses to leave my brain’s memory files. The bug life in central Texas unnerved me enough; how anyone survives the swampy reality of Louisiana on a frog hunt remains a profound mystery, one which I have no intention of solving.

Yet allow me to argue a bit with the premise of the New York Times here. Because it shows a sort of stunning lack of intellectual curiosity, that we Americans are falling so predictably into cultural camps of belonging.

For instance: I could just as easily argue that New Yorkers should be the most enamored of Duck Dynasty, since it represents a foreign lifestyle within their own country’s borders. After all, aren’t we supposed to be interested in the unique and exotic? What could be more of both than an extended family who espouses fidelity to fundamentalist Christian beliefs, who rides airboats by night to hunt alligators, and who wears camouflage suits to work every day? To a Manhattan dweller, this must by definition be unfathomable… and fascinating.

Yet instead, the very existence of a show like Duck Dynasty is anathema to many city folks. It’s an embarrassment, worthy of ridicule and derision. (I am intentionally putting aside here the controversial statements of Phil Robertson, which were not a part of the show. Obviously, those are problematic in their own right.)

Having actually watched the show, I admit that I cannot relate to the Robertson lifestyle. But I can also say that it is not a worthless one. I can say that peeking in on a totally different way of getting on in life was perhaps good for me. And it would be good for my coastal friends, too.

Because we are all, actually and truly, in this together. We are. We’re in this country together, we’re on this planet together. And we’re not going to be getting any other choice in the matter.

In the same way, I wish more rural Americans would watch Modern Family or The Daily Show, two of the most popular programs in urban areas. If we could try to understand the perspective of the other side, we might find there’s more common ground between us. Or at least, maybe we'd start moving in that direction.

So I hope that readers will not see in the New York Times article only further proof of the “rightness” of their own preferences. Watching Duck Dynasty doesn’t turn one into a Trump supporter, any more than watching The Daily Show makes you an automatic Clinton roadie.

But maybe if these are the only shows we let ourselves view, if we allow ourselves to live in bubbles of our own construction, then we are that easily predictable.

Or perhaps it is more accurate to say, we become that easily manipulated.