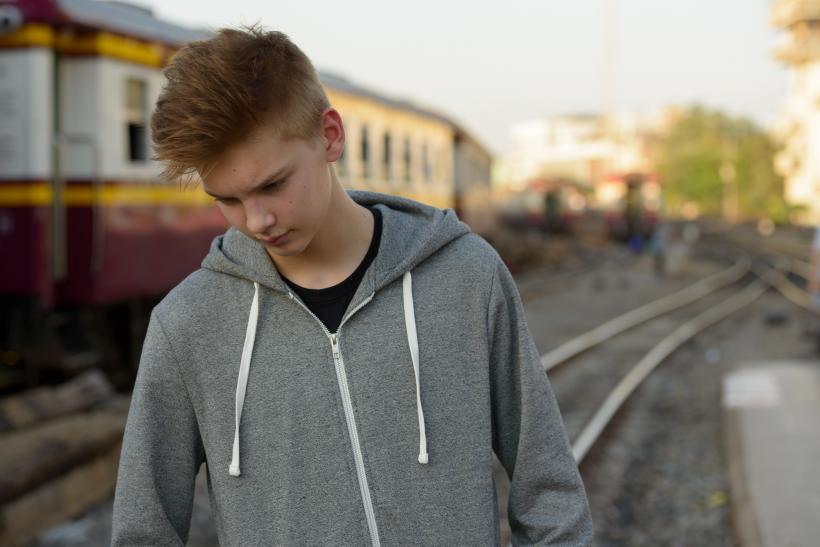 I felt like I needed to run and hide somewhere deep in the woods where no one would ever find me.

When you have a best friend, you expect to be able to tell them anything and for them to love you unconditionally, without judgment.

At least, that’s what I felt about my best friend in sixth grade. She was like an older sister to me; of course she would stick with me.

Especially considering that she was the one who taught me what “trans” meant.

Rewind to starting the sixth grade, the beginning of middle school, and so much anxiety. For most of the girls in my class, it was also the start of puberty. Girls were talking about things that I was honestly so glad I didn’t understand, like breasts growing and periods starting.

One day, as I sat there pretending to listen to the girls in my gym class talking about tampons and other things I didn’t care about, I overheard a word I didn’t understand that spiked my interest: “Jay* is trans, though.”

Knowing that, if I asked them, I wouldn’t get the answer I wanted, and might be mocked for not knowing what it meant, I stayed quiet. But it puzzled me still.

Later that night, I was on the phone with my friend Kate*— who, looking back, wasn’t as much of a friend as I thought, considering the way she hid me. But she was older, so in my young teenage mind, she knew everything, obviously.

Her ridicule didn’t faze me at the time, but later on, I realized it was the sign I needed to know not to say anything further on the subject.

“Bi” and “gay” were the only LGBTQIA terms I knew at the time — and I had only learned them a few months earlier!

“No, not at all! We’re bi, Court. But trans is so different. It’s someone who was born male and feels female. Or the other way around. I don’t get it really. Jay is the only trans person I actually know of. I don’t know. But what did you think of my nails I sent you earlier?”

With that, she was done. But for me, the questions had just begun. When I got off the phone with her, I jumped on the computer and started searching for all things transgender.

I sat up all night thinking through everything I had read. Around 2 am, I began to wonder if I might be trans.

The next day we met up, everything inside of me shaking; my heart felt like it was going to burst because of how fast it was beating.

I kept telling myself that I could tell her anything, trying to convince myself it was true. She seemed to be friends with all kinds of people who didn’t really fit in at school — like me.

So adding the fact that I was trans shouldn’t change that, right?

“Sure,” she sighed, because she never cared for being seen with me very much. “If it’s important.”

The next day we met up, everything inside of me shaking; my heart felt like it was going to burst because of how fast it was beating.

She looked amazing, but annoyed, something I only noticed looking back. All the signs were there for what was going to happen next.

Her eyes nearly popped right out of her head. “EWW! No. Ew! We can’t be friends anymore. I won’t be friends with a disgusting tr*nny. Get away from me and lose my number. And don’t worry, I won’t tell anyone. I don’t want anyone to know I was friends with a tr*nny. You can leave all my stuff with [mutual friend]. Eww... I can’t believe we dated. SO nasty.”

My heart stopped. I felt like I needed to run and hide somewhere deep in the woods where no one would ever find me.

That day I lost my “best friend,” and I decided I would never again come out to anyone.

I struggled until I was 18 with the fact that I was trans. Any time I thought about coming out, I would have a full-blown panic attack.

To this day Kate doesn’t speak to me and denies ever being friends.

And to this day, that moment hurts more than people could truly understand.

If you like this article, please share it! Your clicks keep us alive!
Tags
trans
Transgender
coming out
school
best friend
rejection
LGBTQIA
bisexual
gender
transphobia