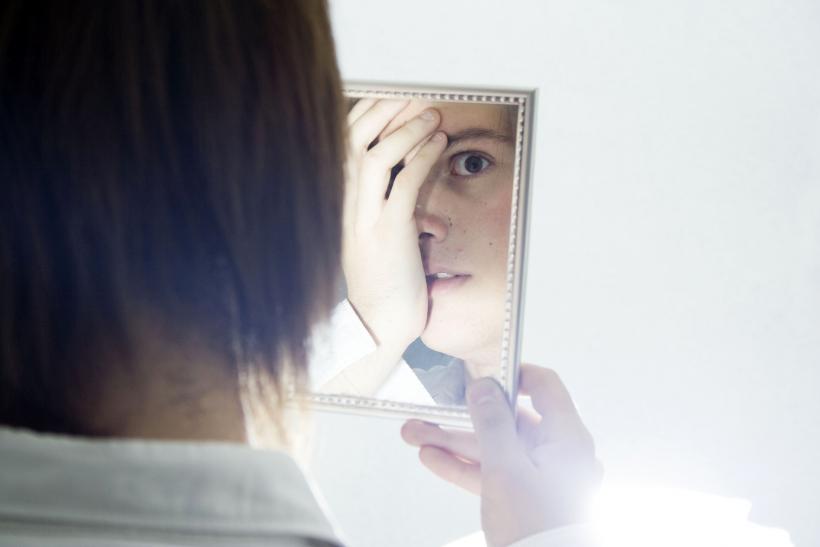 If I told you that you calling me a girl has led to scars on my body, would you believe me?

Most people don't. Most people are unfamiliar with gender dysphoria and with how it can affect someone’s mental health. They don’t comprehend why someone would ever harm themselves because of something like getting labeled a gender that they don’t identify with.

Gender dysphoria — a sense of dissonance between the gender you were assigned at birth or your physical attributes and your own sense of your gender — is something that has plagued me for years.

While many mental health professionals don't believe it is a mental disorder in itself, it is included in the DSM-V. Gender dysphoria can lead to overwhelming depression and anxiety.

I remember standing in front of the mirror at night staring coldly at my long, flowing brown hair, something that so many other young girls would have loved to have.

One night, exhausted by the pressures of being a girl in everyone else’s eyes, I reached up and twirled a piece of my hair around my finger. The longer I twirled it, the more I wanted to rip it out of my head. And that’s just what I did. Without thinking, I began to pull and yank at it, tears streaming down my cheeks.

When I laid down that night to go to sleep, I felt a little better. But when the sun rose the next day, it brought the gender roles I had to fulfill to the forefront of my consciousness.

I was bombarded by thoughts of not fitting into my own body.

Every time someone called me “she,” every time I was addressed as a girl, every time someone dared to tell me that “tomboys are only cute when they’re young,” I dug my fingernails into my skin. Often, it was my privates that I would dig my nails into, because I realized they were what made people think I was a girl.

I realized what made a girl a girl in people’s minds was the presence of a vagina. I grew to hate mine.

As I hit puberty, I once again caught myself staring in the mirror and pulling.

But this time, it wasn’t my hair: It was my dreaded breasts.

The more they grew, the more I pulled at them, wishing so badly I could rip them right off.

Earlier this year, I began transitioning to a more androgynous look, to fit who I am on the inside. I’ve noticed a huge decrease in the amount of self-harm in which I engage.

Being trans or gender-nonconforming isn't a mental illness in itself. Some trans people never experience dysphoria, and for others, their dysphoria is resolved through social and/or medical transition.

But it's also true that trans people struggle with disproportionate levels of anxiety, depression, and other mental health challenges. This is because we don’t identify with the genders we’ve been assigned based on what our bodies look like, and because we can’t reconcile our true selves with the gender roles that are imposed upon us. This often leads to self-harm.

As I sought support online, I didn’t feel as alone.

I began meeting people who had been through similar gender identity issues. I learned what gender dysphoria was and met people who, like me, didn’t identify with the gender they were assigned at birth. I found people from around the world who fit on a wider gender spectrum than I ever realized existed.

There were so many AFAB (assigned female at birth) people who have had similar experiences to me — I never had to feel alone again.

I asked a few AMAB (assigned male at birth) trans, genderqueer, and genderfluid people about their experiences with gender dysphoria, because I was curious how it affected them and how it differed from someone who, like me, was AFAB.

I have indeed experienced gender dysphoria, though for a long time I wasn't sure what it was called. As a child and a young adult, I often had dreams and fantasies about removing my male [sic] genitalia. Even in the present, I often want to be able to just be devoid of any genitalia.

Absolutely. When I'm female, in my peripheral vision downwards, it feels like something is 'missing' on my chest. Like there's empty space there. My brain is trying to tell me 'hey, there's supposed to be curvature there, or a shirt in my vision, or *something*, and being born a guy [sic], it's y'know... just flat there. I didn't really notice this as much until I started wearing a padded bra. Now that my brain has finally had that ‘empty space’ filled in with breast curvature in my lower vision, it's all the... worse when I can't wear a bra and want to. Also, everything between my legs just feels... extraneous material, for lack of a better term.

Earlier this year, I began transitioning to a more androgynous look, to fit who I am on the inside. I’ve noticed a huge decrease in the amount of self-harm in which I engage.

Now, when I look in the mirror, I smile. My baggy men’s shirt hides my breasts (which I plan to get a binder to help me minimize) and my short hair doesn’t make me feel so much like a girl. I’m simply me.

I asked James and Joshua what they do to help curb the anxiety associated with gender dysphoria. James admitted to padding a bra, which helps give the impression of breasts. Like me, Joshua joined groups on Facebook for people who are non-binary, in order to find others to talk to.

The more I have been open about my struggles with gender dysphoria, the more people have asked to see numbers to prove that there is a relation between self-harm and being in the trans community. Some people have gone so far as to say that I have made it up so they will cater to my “imaginary gender needs.”

If only they knew just how many people go through what I did.

I spoke with Katherine Kirkinis, Ed.M, who told me:

Pace's RaRE study (2014) found that 59% of transgender youth in England (ages 16-24) have self-harmed and 48% under the age of 26 have attempted suicide, which is also a facet of self-harm. The trans mental health study (2012), also based in the UK, found that suicidal ideation and attempts reduced after transition, with 63% thinking about or attempting suicide more before they transitioned and only 3% thinking about or attempting suicide more post-transition. A small percentage (7%) found that these feelings increased during transition.

The next time you begin to label someone who looks like they are uncomfortable with that label or someone tells you what they have been through, think of me, Joshua, and Tannis.

Think about the anxiety and depression that person may be facing.

And think about how gender dysphoria may be affecting them.