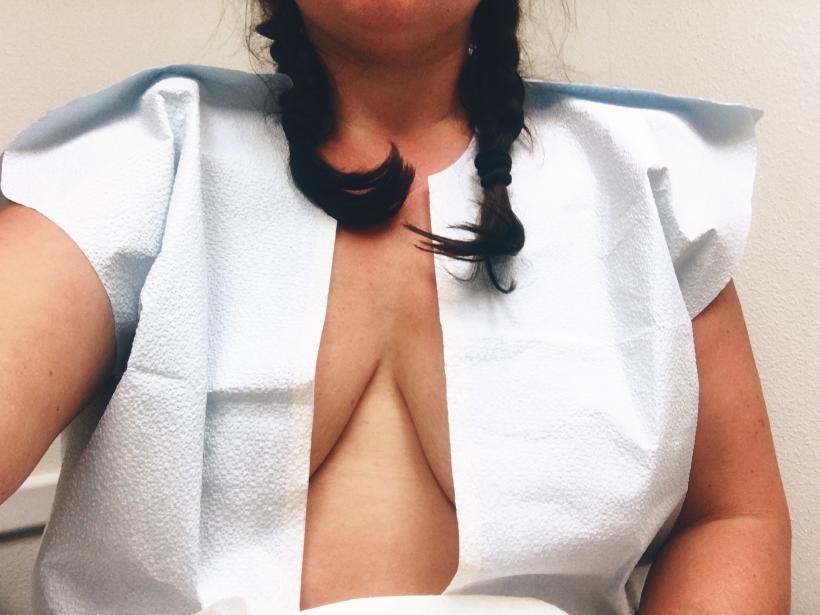 Who's panicking? Not me. Image: Joni Edelman.

Do you want people to for-sure panic?

Tell them not to panic.

A few weeks ago, I went for my very first mammogram. I’m coming up on 42 in less than a month and, while my PPO starts sending scary YOU BETTER GET YOUR BOOBS SQUISHED ASAP letters in lieu of a card on your 40th birthday, by the time you’re 42, they are starting to get pretty upset that you're being non-compliant.

LISTEN, LADY, WE DO NOT WANT TO PAY FOR YOUR CHEMO OR POST-MASTECTOMY RECONSTRUCTION, OK? How bout getting that early detection mammogram?

I’m only half-joking. Insurance companies will do a backflip with a handstand and somersault combo to give a guy a vasectomy, but dammit if you don’t have a $2000 deductible when you have a baby.

Regardless, as part of my BB&A resolution to live a better, more intentional life, with self-care and stuff, I went in for the squish.

(Which is far less painful than people make it out to be, btw.)

The Breast Care Center is on the second floor of the “Medical Pavilion,” which is just a fancier way of saying “building full of doctors and stuff.” It’s swathed in pink and other cool shades of femininity, which includes velvety purple high-back sitting chairs, a weird purple-but-not-exactly-purple loveseat, a floral abomination of a sofa, and 17 glass vases full of pink marbles and grassy reeds (arranged in the shape of a heart, obviously).

The Breast Care Center also has iPads just lying around (I mean, not Minis or anything, just your standard 2nd Gen), because nothing says “forget about that lump in your breast” like a game of Candy Crush.

They showed me to a nice little room and told me to put on the gown that was carefully folded on the examination table (which was exactly like any other examination table, except made of cloth), opening to the front, and told me, “You can leave your bottoms on.”

Well, Jackie, that would have been swell to know before I decided to wear a DRESS.

But, I mean, who doesn’t want to parade around a building full of other possibly terrified women (and probably a few men and nonbinary folks) in the latest in runway mammogram fashion and your underwear. (Not even the good underwear.)

Jackie did my mammogram, which is code for I’m going to manhandle your tits into this glass steamroller, and we had a something other than a nice conversation about how terrible it is to be a radiologist in a children's hospital, where you have to deliver such exciting news as, “Your 10 year old has an inoperable brain tumor.” (Telling women they have breast cancer is like a WAY easier job.)

Anyway, it was Jackie who first said, “Don’t panic.” She said this while she was looking at the mammogram picture, whatever it's called (X-ray?).

Actually, what she said was, “OK, Joni, don’t panic. There is some irregular tissue in your breast. But don’t panic. It could very well be nothing. We’ll do some additional testing, including another mammogram [AKA, I’m gonna feel you up again] and an ultrasound. But don’t panic.”

I'll just be over here with some irregular breast tissue, NOT PANICKING. Don’t mind me while I stroll down the hall flashing that guy who is here with his wife who you probably also told not to panic. I’ll just head back to the pink-on-pink-on-purple exam room to put back on the dress you didn’t tell me not to wear, NOT PANICKING.

He asked if I needed to talk on the phone, said he could step out and call me right away.

I replied, No, I’m just sitting here on this pink table in my underwear and not panicking. Thanks. You can go back to your work team lunch.

That’s not actually what I said. But you get the point.

A number of thoughts go through your mind when you’re standing in a Pepto Bismol-pink-colored room, naked but for your underwear, looking at your lopsided (and more than a little droopy) breasts in a full-length mirror.

...A mirror that I can only assume was installed so that the people standing in front of it could watch themselves cry in their sad, blue, open-in-the-front gowns. (I don’t know why these aren’t pink. It seems like such a no-brainer. I’m going to assume they just get these gowns from the hospital supplier.)

This first thought was:

I am going to do a self breast exam again RIGHT NOW. Now how do I do that? Shit. Channel 24 Nightly News with Stephanie Boorojian and that other guy (what was his name?) told me I should do one of these every month on the 24th, and I have literally never done it, because I need a reminder, and who watches TV anymore?

Great. “Sorry, Stephanie Boorojian, I meant to do the KSEE 24 Buddy Check, but I kept forgetting because mostly my boobs have been either feeding other humans, or in the way. And now I have cancer. Because I don’t watch the evening news. I really like the new hair color. You look 50, tops.”

I wonder if I can ask one of my friends to be my hospice nurse if I die.

The second thought I had was: I breastfed for a hundred million years and everyone knows breastfeeding GREATLY REDUCES YOUR RISK OF BREAST AND OVARIAN CANCERS. If I have cancer I am going to be SO PISSED.

Since the DON’T PANIC appointment, I’ve had a few other appointments where a few other people have told me NOT TO PANIC, thus inducing panic, and I will have yet another chance to visit Jackie next week for more smooshy-boob fun-time. And more panic.

But the mind refuses to be quiet:

A mastectomy would be a pretty legit reason to get a badass tattoo.

Googling:“Efficacy of medical cannabis in reducing nausea in chemo patients.”

How hard is it to get a medical cannabis card?

How hard is it to get cannabis?

I bet my teenagers could get me cannabis.

I wonder if my teenagers will shave their heads in solidarity. I mean, I’m pretty sure, but Kelsey does have really nice hair.

Do people even wear scarves?

My grandmother wears scarves, but we all know it’s to hide her neck.

She’s old and doesn’t have cancer and I don’t think she breastfed at all. BOOM. RISK FACTOR LOWERED.

How long am I going to have to wait to have a follow-up appointment?

Why isn’t there, like, a fast track for women who are supposed to be NOT PANICKING?

What is the first thing they do when they diagnose you with cancer? A biopsy?

I’m an RN; I should know this.

How am I going to tell my husband I have cancer?

Remember that patient you had when you worked hospice? The one who was 36 and had two kids, and died of breast cancer. Remember when you were called out to pronounce her dead and her 8-year-old son was sitting on the sofa crying? Do you remember what you said to him?

I wonder if I can ask one of my friends to be my hospice nurse if I die.

JESUS, JONI. You’re supposed to be not panicking and you’ve already started picking songs for your funeral (“Amazing Grace,” OBVIOUSLY).

Maybe you should just make your follow-up appointment and stop signing your own death certificate.

I’m going to see Jackie again next week. Maybe I should have waited to write this until I know I don’t have cancer.

But I can’t help but wonder about the people before me who have heard, “don’t panic,” who had reason to panic.

And the people who quit worrying about how saggy their breasts had become with age, and started trying to decide if they’d get implants.

It’ll be a while until I know I don’t have to panic.