My Son Is Gripped With Anxiety — And He's Not Even 2 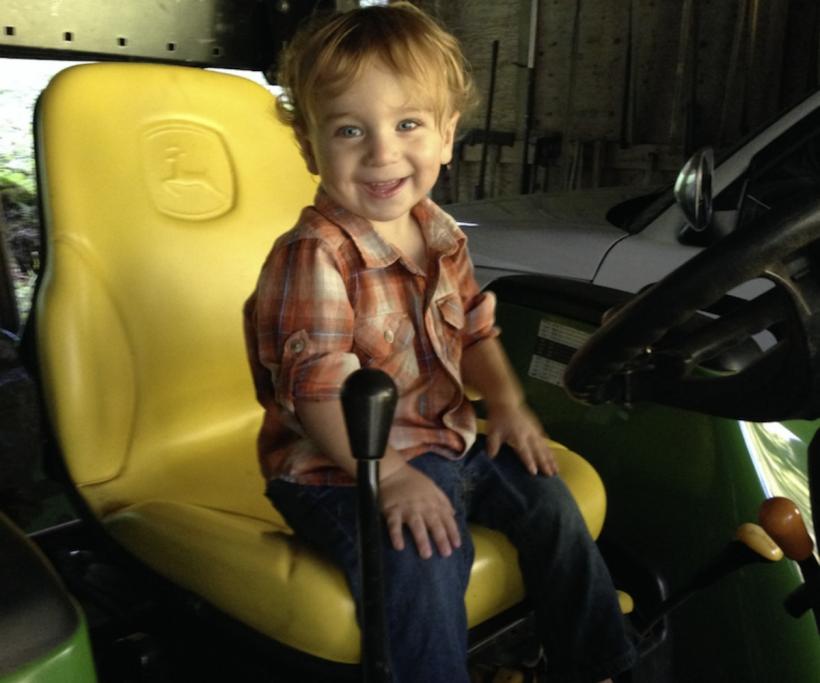 Still figuring out what his triggers are, I’ve started to anticipate some things that will set him off and strive to prevent them. Image: Meredith Mortensen.

It’s difficult to watch him react in such an intense and frustrated way to simple situations that wouldn’t phase other children his age.

It was 10:30 at night and I was in the bathroom brushing my teeth when my one-and-a-half-year-old son started frantically screaming from his crib. He’d been sleeping peacefully for hours. Alarmed, I quickly went into his room, bracing myself for the worst. Maybe we had an intruder or his window had been shattered by a rock. I was relieved when he held up a stuffed bear that he’d sweetly snuggled with at bedtime, and continued yelling, clearly under duress.

It became obvious to me that we did have an intruder. The intruder was the teddy bear.

I calmly took the bear out of his crib and stashed him away. My son breathed a loud sigh of relief, looked at me with thankful eyes and went back to sleep. Bewildered, I walked out of his room, wondering why after sleeping for hours, a stuffy that earlier had been a source of comfort suddenly turned into a foreign object — an intruder in the middle of the night — triggering a panic attack.

Kids are puzzles. My son is a 1,000 piece one. This wasn’t the first time my young son, not yet two, had experienced a bizarre, heightened amount of stress when dealing with normal, everyday circumstances.

One morning very recently, we were in the kitchen getting breakfast, just as we always do. Suddenly, Cade noticed there was a plastic bag visibly protruding from a drawer. While pointing to it, he loudly repeated,”Uh-oh, Uh-OH, UH-OH.” He desperately wanted me to put the plastic bag away, hiding it totally and completely out of sight. Once I did, he immediately calmed down. I could see him physically relax after the bag was in its correct spot, able to resume his day.

But on our walk to the park later, we passed a home with a gate that was open.

The “uh-oh’s” kept coming, each one louder than the one before. I tried to explain to Cade that we couldn’t close this gate, because it wasn’t ours to close, but reason is lost on one-year-olds. He was panicking, completely worked up, and starting to sweat. It wasn’t until we were finally at the park and he was playing happily on the playground that he was able to move on from that debilitating stress.

Cade is the type of kid that closes his own baby gate, because it bothers him if it’s open. If he’s faced with a choice of two doors to pass through, he’ll tantrum, going into a toddler tailspin — until you go through the door he prefers. Even a simple sound will be declared, “Too loud, too loud!” He insists that his clothes have “No tags. Tags Off.” These unique idiosyncrasies, as well as countless others, have given me a wealth of insight into his freshly forming personality and what appears to me as hypersensitivity.

As somebody who craves order and tidiness, I can appreciate that he likes things to have a place. If things are out of sorts, it noticeably and visibly stresses my son out. He becomes transfixed, obsessed about restoring peace, and remains paralyzed, until whatever is bothering him is resolved.

Living with children generally means living in a sea of clutter, and it’s a constant emotional drain on me. But it’s fascinating to observe how it impacts my son, too. Toys litter our house, and while my daughter groans when its pick-up time, Cade happily cleans up saying “back” as he puts each toy away with a smile on his face.

It’s hard to see him suffer through extreme stress and hypersensitivity when I feel like his days should be full of childish joy and laughter, not anxiety and anger.

Still figuring out what his triggers are, I’ve started to anticipate some things that will set him off and strive to prevent them. Despite being able to avoid some of them at home, it’s a painful thing to experience as a parent. It’s difficult to watch him react in such an intense and frustrated way to simple situations that wouldn’t phase other children his age. It’s hard to see him suffer through extreme stress and hypersensitivity when I feel like his days should be full of childish joy and laughter, not anxiety and anger.

Fortunately, there are plenty of moments when he’s light, dancing happily, and showing his silly side. I soak all these moments in, never knowing what the next thing will be to set him off.

A few things that have helped me parent to his personality are:

Using a gentler approach when it comes to discipline has been helpful. My son responds well when I take my time and explain a situation to him, showing him why something is or isn’t appropriate. Raising my voice with him only scares him and causes him to react strongly.

Cade is a sensitive person that needs a little extra comfort. I offer to rock him to calm him down and he often takes me up on my offer. I sing to him and rub his back. When we leave for our days we give each other we give hugs and kisses. This extra support sustains him until he’s back in the safety and comfort of his family.

Fortunately, there are so many simple fixes for things that bother him. If something is too loud, I tell him to cover his ears. If a tag is bothering him, I cut it out. If the Velcro isn’t lined up on his shoes, we take the extra time to line it up. It’s these simple fixes that have a big impact on his mood.

4. Giving him some control.

Often, he doesn’t have control over his environment or something that is setting him off. In situations where we can provide some control to him, we do. We offer him a choice when possible. Whether it’s over what shirt to wear or who is going to change his diaper, it helps him feel empowered and often avoids a meltdown.

“My Son Is Gripped with Anxiety — and He’s Not Even Two” by Meredith Mortensen originally appeared on Babble.com and was reprinted with permission.