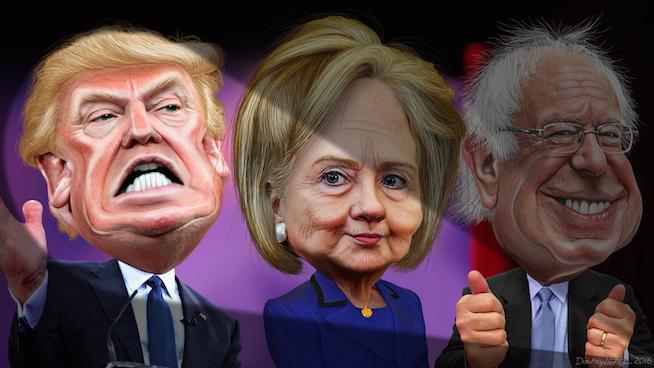 Observations on the Republican side:

There are moments when democracy reveals to you much that you’d rather not know about your own country. Could it be because I’m a Millenial, and thus issues of racial and gender equality feature more prominently than in other, aging demographics?

But I cannot shake the horrified amazement accosting me with each Trump victory. How can so many Americans overlook the sprawling list of his faults and character flaws? Trump has no understanding of foreign policy. None. He has no respect for anyone who doesn’t look like him, talk the way he talks, or agree with his every utterance.

Trump is a narcissist, a bully, an ignoramus, and an utter threat to our country’s wellbeing. That’s an opinion, sure. But it’s an opinion backed up with endless facts. If you want to disprove me, imagine trying to argue the opposite. Imagine trying to defend the premise that Trump is an empathetic, respectful, brilliant mind and countenance who will bring unity, peace, and joy to Americans — and the world.

And he just won 60% of the New York Republican vote.

America, what happened to you?

Ted Cruz got his butt handed to him, finishing a distant third, behind Trump and Kasich. Cruz picked up zero delegates to Kasich’s possible few.

John Kasich won in Manhattan, Trump’s specific “hometown.” So, if you really need a wisp of good news, there you go.

Many are commenting that this is the effective end of Sanders’ campaign, though don’t tell that to the hardcore Bernie faithful. But Clinton really is so far ahead in pledged delegates, and leads him in the available polls for upcoming states, that it seems an impossible feat for Sanders to catch her.

Sanders had hoped for a surprise upset win in NY, and certainly would prefer to see much closer margins. But New Yorkers chose their former Senator, and I guess we’ll see if Clinton can keep that northeastern “firewall” of sorts going forward.

There really isn’t much surprise in these results — on neither the Democratic nor Republican side — as voters did what the polls predicted.

Get thee to the polls, Americans!

It is likely, given the state of the race, that both parties will be taking the competition all the way to California, the last state to vote, on June 7th.  Which means, of course, we have at least six weeks more of primary infighting.

If you like this article, please share it! Your clicks keep us alive!
Tags
New York
Hillary Clinton
donald trump
2016 Presidential Election