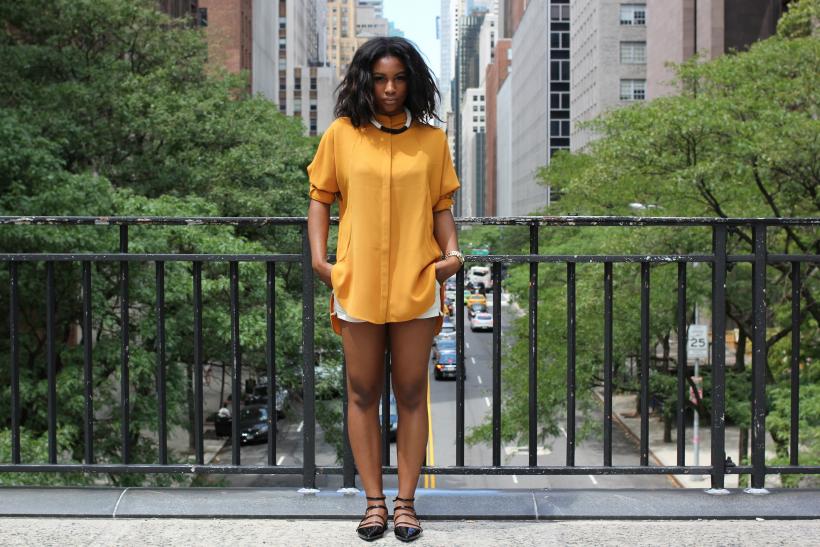 I somehow manage to forget from one summer to the next just how frustrating it can be to merely exist in public spaces when it’s warm outside. Image: Yegide Matthews/ Unsplash.

While one instance of street harassment is annoying, one every block can start to feel debilitating.

It started for me last week, when I decided to spend a few hours running errands in the summer sunshine while audaciously wearing a loose-fitting baby doll dress, comfy flats, and a denim vest.

Apparently my need to keep my legs ventilated served as a Bat-Signal to the fine men of Gotham, who were drawn by its golden glow to yell stuff at me every five minutes.

At first, the catcalls didn’t really register. The unwanted commentary of men is so ubiquitous as to be just part of the underlying hum of a woman’s daily life.

But over the span of four or five hours, I was yelled at by at least 15 different men — and that hum became a roar.

Am I unusually sexy today or what? I thought, looking down at myself.

But nope, it was just the usual unwashed mom-bun and dirty ballet flats I always tool around town in.

And then it dawned on me: Why, it’s street harassment season!

That’s right, it’s that time of year when the rising temperatures are matched only by the collective blood-boiling of women and non-binary people when we realize that it has once again become open season on our bodies.

When there’s only so much Bikini Kill you can listen to before you’re ready to create a summer statement necklace from the severed penis of the next guy who yells “Hey baby” at you. (My friend Lesley points out that a testicle appears to be the perfect size to hold a lipstick.)

When you’re suddenly and rudely slammed back into the reality that your body is once again up for public discussion just because your shoulders are visible.

And don’t even think about eating a Popsicle in public.

Despite the fact that my body has been bringing me unwanted attention since before I started menstruating, I somehow manage to forget from one summer to the next just how frustrating it can be to merely exist in public spaces when it’s warm outside.

It’s not that nobody ever gets catcalled in a puffer coat and snow boots. Ninety percent of women surveyed in Yemen reported experiencing harassment on the street, despite the fact that most of them wear hijabs, abayas, or niqabs.

Any situation you can think of — even one that’s achingly unsexy — I guarantee that somebody has been catcalled in it.

I once got catcalled while wearing my infant.

That’s right, someone was once so moved by the presumed presence of tits beneath the front-facing baby carrier strapped to my torso that he had to holler about them.

And even in the middle of a blizzard, we never forget what it means to be a woman (or at least be read as a woman) in public: our need for an escort on a dark street, the flutter of fear when a masculine person walks too closely behind us.

These things keep us vulnerable year round. We are self-policing.

But when temperatures start to rise, we’re not only wearing less, we’re out more. And so is everybody else.

And while one instance of street harassment is annoying, one every block can start to feel debilitating.

How much more might we achieve on a given day if we didn’t have to perform the exhausting mental gymnastics of preparing ourselves for, and then navigating, the reality of street harassment?

That’s what so many straight, cis men don’t understand: It’s not just the one guy shouting “Hey beautiful!” on our morning commute that gets to us.

That we are objects on display — even if our mother just died, if we’re sick, if we’re struggling with depression or Crohn’s disease or just having a really bad fucking day.

We’re objects to be commented upon —even if we just got a big promotion at work, or we’re reading a really good book.

It’s a reminder that our bodies are public property, and it drives our bodies out of public spaces.

A 2013 study in the European Union found that street harassment drove half of the surveyed LGBTQ people (a demographic particularly subject to street harassment) to avoid public spaces sometimes.

Sixty percent of Chicago women and girls (mostly African-American and/or Latinx) surveyed in the summer of 2003 said they felt unsafe walking in their own neighborhoods.

In another study, 84 percent of the women surveyed reported that they “consider changing their behavior to avoid street harassment.” Street harassment controls us, forces us to reorder our lives around fear.

That’s the reason so many of us just keep shuffling by, heads down and mouths closed, despite the anger roiling inside.

We know that to retaliate — or even just to politely decline an advance — may be an “invitation” to violence, or, at the very least, a quick-turn insult to the “ugly bitch” who dared to want to be left alone.

People have been killed for less.

Throw in the fact that street harassment, usually aimed at an individual walking alone, is largely invisible to those not being targeted — which may mean others doubt or question our experiences.

And not just men. I can’t tell you how many times I’ve heard a woman say that she just doesn’t believe it happens as much as another woman says it happens to her.

There are many reasons (including race, ethnicity, and gender presentation) why one person may experience more street harassment than another. Being accused of making a big deal over “nothing” is just one more ripple to the warped funhouse mirror nightmare of being on the receiving end of systemic street harassment.

It all conspires to make the experience of moving through the world fucking exhausting.

I’ve often wondered how much more young women might accomplish if we didn’t have to spend a decade “learning to love” ourselves.

How much more might we achieve on a given day if we didn’t have to perform the exhausting mental gymnastics of preparing ourselves for, and then navigating, the reality of street harassment?

I love summer. I love spending long days in the park with my kid, love feeling weightless and free without a heavy winter coat. I love being out in my city and interacting with my community. I like the sun on my bare skin.

I’d enjoy it a lot more if it didn’t come with a heightened sense of vulnerability to danger, if it didn’t make me feel like prey.

But hey — it’s that time of year, when we learn once again to just deal with the shit-ton of daily microaggressions that come out along with our summer tank tops.

Now, how about that Popsicle?