Why Your Son Being Friends With A Girl Should Be NBD 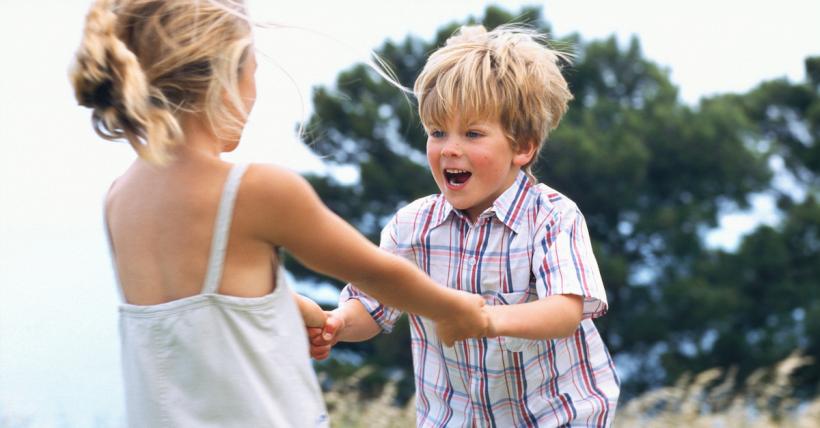 Men and women work and study side-by-side at nearly all levels these days, and your son should feel totally comfortable seeing women as more than just potential romantic partners.

Few things are cuter than the sight of your little boy holding hands with a little girl in his kindergarten classroom, or watching as your daughter puts her arm around a little boy from her tee-ball team. At that moment, parents often assume that what they’re witnessing is young love, even if their child has never had a crush and is just expressing affection.

While it may be tempting to call your child’s friend a girlfriend or boyfriend, or to tease them about having a crush, here are seven important reasons to resist.

1. You teach your son that the only role for girls in his life is as a romantic partner.

If every time your son hangs out with a little girl, you call her his “girlfriend” rather than a friend, buddy, or pal, you’re sending him the message that girls and boys can’t be friends.

Boys don’t need more of this message in their lives. Everywhere they turn, women are used as sex objects to sell products. Casting all the girls he hangs out with as a “girlfriend” or “potential girlfriend” sets the precedent that girls can’t ever just be his friends, which sets them apart from boys, rather than equals.

2. You teach your daughter that her only value to boys is in being attractive or desired.

When your daughter hears you call her buddy her “little boyfriend,” she’s being told that her role in relationships with boys is to be the girlfriend, not the friend who happens to be a girl.

The downside of sending this message is that you set your daughter up to believe that every boy she’s friends with needs to eventually fall in love with her or should find her attractive as a romantic partner.

That’s an unhealthy message that doesn’t need more reinforcement in this society. As it is, girls are told that their value is in how beautiful they are and how much boys and men desire them.

3. Your teasing may cause more damage than you think.

It might be tempting to joke with your child about their friendship, and it may even seem very good-natured to you. But to a kid, this teasing can be very hurtful.

Dr. John Duffy, clinical psychologist and author of The Available Parent, has seen this first-hand.

“I’ve worked with kids who have been VERY embarrassed, nearing shame, when their parents romanticize this type of friendship through teasing. In some instances, it can get upsetting enough as to end the relationship,” he explains.

Dr. Duffy also notes that “the teasing itself may provide an odd lens through which to view opposite sex relationships later in life (specifically that they may feel wrong, or embarrassing, or mock-worthy, or shameful), and may even make such relationships less appealing as a child gets older.”

4. You presume that you know what your child’s sexual orientation will be.

While it seems innocent to call your 5-year-old son’s best girl buddy his girlfriend, it becomes less innocent as he grows up and discovers his own sexual orientation. Same, of course, applies to girls.

For some kids, a parent who presumes their child’s sexual orientation in this way can cause harm down the road when the child starts to reconcile their sexuality with what their parents expect from them. This can be very painful and make the coming out process harder than it may already be.

5. You may turn an innocent, child-like crush into something too adult for your child to understand.

Some kids seem to be born with crushes, while others don’t even feel a twinge until adolescence or older. Regardless, kids should feel like they get to define their feelings for themselves and set the terms for their friendships.

It’s important to remember that small kids’ crushes are innocent and not the same as the kinds they’ll have when they get older. Expecting little kids to behave the way grownups do can push them or the child they like into something they’re not ready for.

6. Your child may act like a romantic partner rather than a buddy without their friend’s consent.

If a little boy comes to school talking about being in love with a girl in his class or making public declarations about her beauty, it may seem romantic or sweet at first.

That little girl may not feel the same way and is probably too young to know how to handle the unwanted attention. She may feel ashamed and embarrassed or even pressured to reciprocate his feelings, which is not a healthy experience.

The same is true for little boys who receive unwanted attention from girls. Suggesting your child act toward a crush the way a teenager would does not consider the feelings of the other child.

Instead, suggest some questions for your child to think through in order to encourage empathy:

How might she feel if you stood up and said she was the most beautiful woman in the world?

How might he feel if you kissed him on the cheek on the playground?

What if the child felt very embarrassed?

Is there a better way to handle these feelings?

7. You deprive your child of the lessons kids learn when they have platonic boy-girl friendships.

While this may seem like a small problem now, the modern workplace is not a healthy place to carry the mindset that boys and girls (or men and women) can’t be just friends.

Men and women work and study side-by-side at nearly all levels these days, and your son should feel totally comfortable seeing women as more than just potential romantic partners — for his sake and the women and girls around him. And your daughter should learn that her value is equal to that of any man she works beside, regardless of whether he finds her attractive.

“Why Your Son Being Friends with a Girl Should Be NBD” by Joanna Schroeder originally appeared on Babble.com.

We Should Never Tell Our Daughters: "He's Only Mean Because He Likes You"
The One Word Teachers Can Say To End Gender Stereotyping
How I'm Trying To Trick My Son Out Of Being Sexist

If you like this article, please share it! Your clicks keep us alive!
Tags
son
parenting
sexism
masculinity
feminist