Wonder Woman is the hero so many women and girls have been waiting for their whole lives.

Things are never going to be the same...

Before I discovered comics or watched the original Wonder Woman TV show, I was a geek. It's part of who I am.

I've also always been a feminist. It was a gift handed down to me by my mother, a "women's-libber," and her mother and aunts before her. Even the men in my family are feminists, generations back.

I even dressed up like Bobbi Morse (a.k.a Mockingbird) after writer Chelsea Cain endured a slew of harassment and threats because she wrote Bobbi as a feminist. 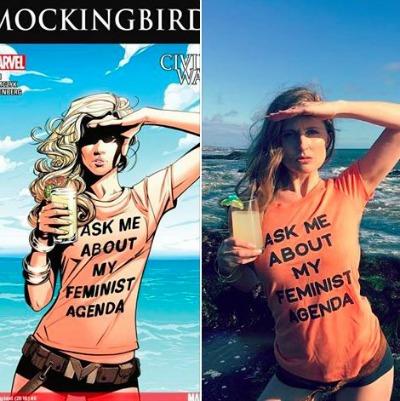 So I knew I'd love the new Wonder Woman movie, directed by Patty Jenkins.

The female characters in superhero movies have always made my heart sing, even when they've been less-than-perfect. But I had a feeling Wonder Woman was going to be our moment.

And holy smokes, Wonder Woman did not disappoint.

There are about a zillion things I could say about what Patty Jenkins was able to accomplish with this movie, but for now I just want to touch on a few of the singular aspects of this film that were game-changers for all of Hollywood (and kids everywhere).

So here, in no particular order, are eight of the most inspiring, ground-breaking moments in Wonder Woman (spoilers ahead!):

1. There are absolutely no men in the first half hour (or so) of Wonder Woman — and you don't miss them at all.

The island of Themyscira is beautiful and inhabited by a lot of different types of badass women, but there are absolutely no men.

These warriors are trained by women, and every day they challenge each other to do better.

Iron sharpens iron, as they say, and each of these warriors helps the others grow stronger.

You never feel, not even for a moment, that these women wish a guy would show up.

2. Diana meets a man, and her sense of who she is doesn't change at all. 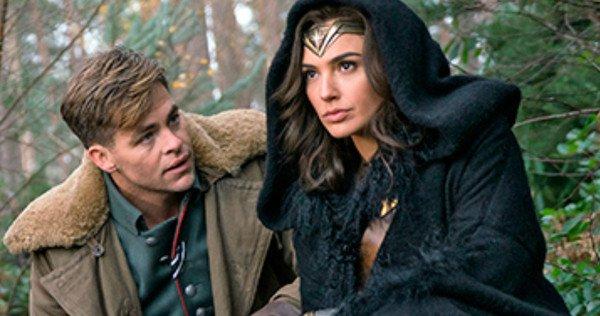 Steve Trevor's arrival on the island changes nothing, except to show her the direction of her mission to create peace on Earth by stopping Ares, the god of war.

Steve is always her friend, eventually her lover (more on that to come), and an incredible partner for her, but he isn't the catalyst to her greatness.

She was always great. He stands aside and lets her live her mission.

3. The men and women work together to save the world.

Usually, in superhero movies, the men save the day with a little help from the ladies.

But they are always disposable.

Think of it this way: Black Widow has always been an important part of the Avengers movie cast, but nothing would be different if you took her out of any of their movies.

But in this case, the men rally around Diana in a common goal to stop the war in the unique ways each of them can.

Steve has his mission, Diana has another, and together these separate missions actually achieve the goal of stopping what was about to be the deadliest moment in human history.

This is probably the most important aspect of Wonder Woman, because it models for us a goal for society in a way I've never seen before in a mainstream film.

We, as feminists, aren't trying to take over the world and become a powerful oppressive force to keep men down.

We want equality. We want to walk side-by-side with our brothers and our friends. We don't want to take on the role of oppressor.

That goal is perfectly embodied by Wonder Woman.

4. There are older women on screen, and they have wrinkles AND muscles. 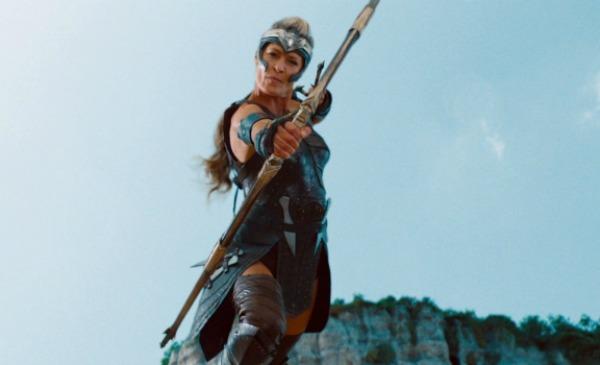 Get this: There are beautiful women over 50 in this movie, and they have wrinkles on their faces.

I KNOW! CAN YOU EVEN BELIEVE IT?!

They are over 50, the skin around their eyes crinkles, their foreheads crease, they have laugh lines and firmly-set jaws.

I have never in my life seen wrinkles and aging skin so beautifully on display in an action film. Or maybe any film.

Usually there are two groups of women on-screen: The young, beautiful, badass ones and the wrinkled, aging, wise ones.

Not so with Robin Wright as General Antiope and Connie Nielsen as Queen Hippolyta (among others!).

They are older AND gorgeous. They are aging AND badass. They are wrinkled AND lovely.

I almost cried with joy.

Now, let's not get wild here. They are also thin, ripped, able-bodied, perfectly styled, and made-up by Hollywood's best. These aren't highly diverse images of beauty.

But it's still progress.

And we need it, because growing older as a woman in this society is no freaking joke. Even for us non-famous gals.

As we drove to the theater, I commented to my husband on how my lipstick now seeps into the deepening wrinkles around my lips.

I've been trying to figure out a solution to this problem (because I love lipstick). I even tried Botox around my mouth for these wrinkles, but quickly realized it's not for me. At least not now.

As I've gotten older, I've realized that being told I was pretty was something that held me back in my life. I relied too heavily upon it, and placed too much emphasis inside myself on this part of who I was.

I'm done with that now. And I'm profoundly grateful to Patty Jenkins for showing me how gorgeous real-life aging skin truly is.

5. Diana has fully empowered, consensual sex with Steve, solely because she wants to.

Patty Jenkins did a brilliant thing in the beginning of Diana and Steve's story arc together. While sailing to England, the two heroes have a conversation about sex wherein Diana explains that she knows all about sex, probably more than he does.

In addition to knowing what sex is, she explains that she knows that women can have pleasure without a man.

It sets us up to understand that when she does choose to sleep with Steve, it's from a fully informed, empowered place.

All of that freedom makes their choice to have sex hotter than nearly anything we've seen on screen before — even while it remains firmly PG in content.

6. Diana and the Amazons inspire little girls to kick butt and take charge.

This is so obvious it should go without saying, but it's incredibly inspiring to watch Wonder Woman through the eyes of our daughters.

Our girls are given a different universe of dreams and goals, thanks to Wonder Woman.

While watching a fun, exciting movie, they are quietly inspired to take charge in their own lives, and to not feel like passive players in their own destinies — or in the course of history.

Jess Weiner, Culture Expert and CEO of Talk to Jess, summed up so many women's feelings when she said, "I cried thinking about how different our narrative world for girls and women would be if we had more films like this growing up."

7. Diana and the Amazons inspire little boys, too.

My youngest needed to visit the bathroom about a third of the way through the film, and as we made our way through the theater and up the stairs to restrooms, he ran, lept, jumped and even did a full-body roll under the velvet ropes. (Don't worry, the lobby was empty!)

He did all this, mind you, with his arm in a giant cast. He is one of those fearless kids who is always covered in scrapes and bruises. He is only nine, but has already had three broken bones.

Sure, I should've stopped him, but before he started his dash he said to me, "Mom, I think I've got the soul of an Amazon, like Diana!"

Think on that for a moment. A little boy in America saw himself in Diana. In a little girl. And he found her inspiring.

My little boy saw a group of powerful, adventurous, strong human beings doing flips and leaps and rolls and fighting bad guys — and he was inspired.

Wonder Woman explodes the lie that women are the weaker, second-string warriors.

It removes the gender binary that says men are the protectors and women need protection.

Patty Jenkins and Wonder Woman get us one step closer to that dream.

8. Diana's strength is innate to who she is.

In so many superhero movies, women and girl characters need to suffer in order to find their strength.

Not so with Wonder Woman. She was born strong, born knowing she is a hero.

She fights and defends what's good while holding up her cuffs effortlessly. Her power, speed, and skills come from something innate within her (and an awful lot of hard work), and even when she was a little girl, she knew that strength was there.

Sure, she finds a deeper level of strength after she suffers. But that is because she finally has a revelation about the nature of humanity. She feels love, fear and anger — the primary motivating forces for humanity, and she understands why she was given her power.

But she was always a hero.

There are so many more things I could say about Wonder Woman, but I could never write them all.

Above all, I just want to thank Patty Jenkins and the producers, writers, cast and crew of Wonder Woman for what they've created.

Hollywood will never be the same, and I can't wait for Wonder Woman 2. I hope the sequel will be written by a woman, as I think this will resolve some of my (admittedly minor) issues with the film.

I also hope Patty Jenkins takes an opportunity to pull Phillippus, another gorgeous young Amazon warrior, from the island to fight alongside Diana. Now THAT would be cool.

More from Your Tango:

How We All Misunderstand The Real Definition Of Happiness

5 Heartbreaking Signs Your Spouse Is Silently Suffering From PTSD