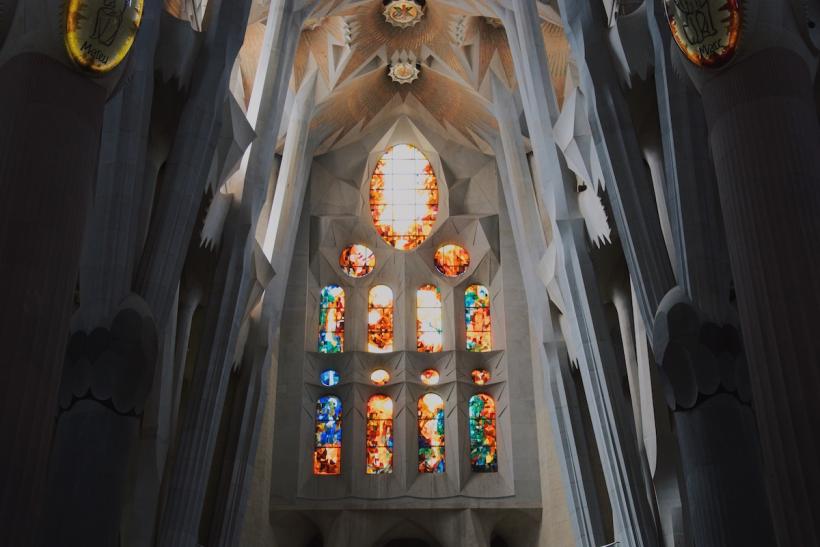 Right before my first communion, my Mexican grandmother told me, "You should never be alone with a priest."

"Then who will I confess my sins to?" I asked

"Confess to me. What are your sins?"

At the age of eight, it was hard to think up something. "I forgot to make my bed and change my bird's water this morning."

She smiled at me. "You see, you have nothing to confess."

You could say that I grew up Catholic, and that's a shade of true. I grew up culturally Catholic. Every Saturday I'd go with my grandma to church, skipping mass and instead lighting candles and praying to the Virgin Mary before we started our day. I'd go with her to the botanicas and pick up saint candles, frankincense, and myrrh. Sometimes she'd buy me little saint cards with prayers on the back, or packets of sandalwood incense.

Lying in bed with my grandmother before her telenovelas started, she'd tell me little stories or saint mythologies. My favorite was the one about the poor young man who followed Jesus everywhere and would kiss his feet every night. Then one day the devil poisoned Jesus's feet, and when the young man went to kiss him, he turned black from the venom. Jesus transformed him into a saint and he's the one who you pray to when you need to get rid of the venom in your life.

I know now that saint doesn't really exist, but I still pray to him sometimes. When I do, I feel my grandma's presence, blessing me.

In Mexico City, I walked through La Catedral Metropolitana, the first time I had been in a church without my family in 8 years. The church had high gilded arches, beautiful oil paintings, and it is without a doubt the largest, most beautiful, elaborate church in the Americas. While I walked through the cathedral during mass, Catholics stood up singing biblical hymns in Spanish. It was the first time I understood what the songs meant, since I grew up going to churches that did mass in Latin.

Walking down the aisle ways, my eyes filled with tears. Is this what angels sounded like, I wondered? It seemed so cruel to be in Mexico City without my grandmother. My grandfather was an architect who had built modern churches throughout Mexico, and though he died before I was born, it felt like he was missing, too.

I was walking through La Catedral with missing ghosts. And somehow, I had become a Mexican caricature, La Llorona, wandering through a place with such history, without any of my own.

And while the tears would not stop, I saw so many young girls standing next to their abuelitas, holding their hands. They wore silk bows in their hair, dresses with pleats and sweaters with embroidered flowers. Church did not seem like an obligation.

How could it be with their abuelita by their side?

Later, after walking outside the church, my friend Arturo, who is in a post-punk band, asked me to watch indigenous people blessing the land on which the church was built.

"Why are they blessing it?" I asked.

"Because this land is cursed. It's built upon the bodies and cities of dead Aztecs. They are giving our city a limpia, and trust me, we need it."

He bowed his head for a moment, and I did too.

Mexican Catholicism doesn't fit into a neat, repressive box. Indigenous traditions, brujeria, and rebellious faith brews in many of us. There is a deep understanding of the evil that was and is still done in its name, and at the same time an embracement of death, and the idea that no one is ever really gone.

Dia de los Muertos is a mestizo of indigenous and Catholic traditions. In November, Dia de los Muertos altars are in every major church in Mexico, and Mexicans decorate graves in saint candles and photographs and flowers and rich, pan dulces. And yet the imagery, of dancing skeletons laughing and celebrating death— it's hardly biblical.

In my rebel Catholicism, and the Catholicism that I see so many other Latinx people practice, faith and cynicism are dancing partners that invent their own steps.

I did not grow up with fire and brimstone. No one in my family ever called me a sinner.

But I did grow up with Catholic guilt; there was right, and there was wrong, and when you did wrong, it was you who punished yourself with that gift that keeps on giving: anxiety. And to counter Catholic guilt, I can be too openhearted. Sometimes I am told, "'You always give people the benefit of the doubt'; 'you are too loyal'; 'you have too much faith.'"

And I wonder: Is it better to doubt, distrust, and keep everyone at arms length? Or is it better to fall, and sometimes enjoy being caught before you hit the ground?

Isn't that what faith is all about?

If you like this article, please share it! Your clicks keep us alive!
Tags
catholicism
latinx
religion
Travel
Mexico
Church
feminism