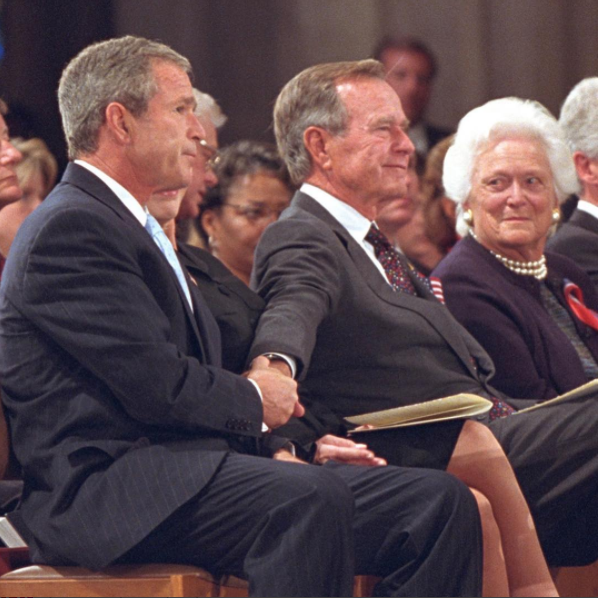 It's probably not terribly surprising that W. is willing to question Trump. (Image Credit: Instagram/georgewbush)

As the weeks of the Trump administration march awkwardly on, the question of Trump and his inner circle’s ties to Russia remains on a lot of minds. The most recent voice in the chorus calling for investigations into the matter is former President George W. Bush.

Our 43rd POTUS did an interview on the Today Show this morning and dropped this thought when asked about Trump’s potential Russian entanglements:

"I think we all neeed answers ... I'm not sure the right avenue to take. I am sure, though, that that question needs to be answered.”

He went on to say that he trusted Senate Intelligence panel Chairman Richard Burr to make the decision about whether or not to appoint a special prosecutor on the matter.

I’m pretty sure that if the most recent past president of your own party is saying your relationships with a foreign entity need to be investigated, you’re shady as fuck. I really can’t recall any instance where a past president stepped up and said something like this about a sitting president.

I mean, you didn’t hear Jimmy Carter begging for more details of what happened between Bill Clinton and Monica Lewinsky, right? Hell, you didn’t even hear former Secretaries of State Collin Powell or Condaleeza Rice — never mind Madeleine Albright — demand investigations into Hillary Clinton’s actions in Benghazi. This whole exchange is weird. It sounds like Bush is trying to give his party permission to do the right thing when it comes to investigating allegations of corruption.

Sad that a political party would need permission to do the right thing, and yet here we are.

But (and there's always a but), as laudable as it is for Bush to break his customary post-White House silence on policy matters, it would have been nice if he had said this earlier. Like, during the campaign. Maybe he could have used his position to help America avoid being governed by the shadiest dude to be inaugurated since Nixon.

But no. W. stayed home, painted pictures, didn't get involved. Maybe didn’t want to look like he was exacting some kind of revenge for Trump’s treatment of his brother Jeb during the primaries. Or maybe he just didn't think Trump would win.

I’ll go ahead and give the former POTUS credit for saying what we’re all thinking today, and I’ll keep my fingers crossed that Congress listens to what he has to say.

If you like this article, please share it! Your clicks keep us alive!
Tags
Today Show
George W. Bush
donald trump
Russia
POTUS