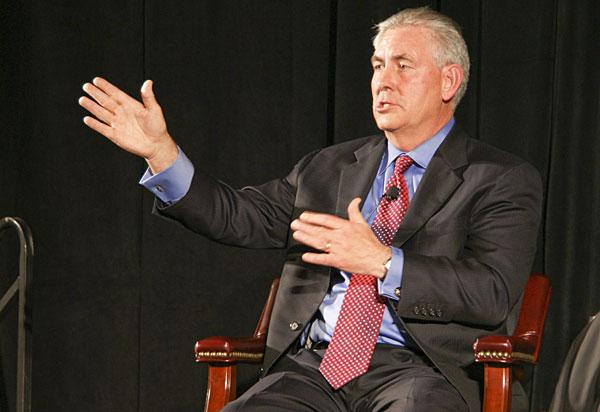 "Wayne Tracker" was Rex Tillerson's alias email account while he served as CEO of Exxon Mobil.

Wayne Tracker. When I first came across this made-up alias, it didn’t speak to me like someone’s first and last name. I read it instead as a job description. Imagine: a discombobulated actor playing Cowboy 3 escapes off some western set, wanders onto a Hunger Games shoot, and now a hapless intern is slapped with his 78th job duty: “Wayne Tracker.”

But it seems Secretary of State Rex Tillerson, former CEO of Exxon Mobil, did mean for “Wayne Tracker” to be accepted as a real name.

I don’t know for sure, but I’m thinking Tillerson is a Texan… checking, checking… yep. (Take it in love, Texas. Of all the states, you are my boo.)

While employed by the oil giant, Tillerson allegedly used an alternative email account assigned to a one “Wayne Tracker,” and apparently it was on said account that Tillerson discussed Exxon Mobil’s climate change findings. Or, more accurately, “Wayne Tracker” offered ideas on how to disclose their scientific research… perhaps in a way that would minimize risk and maximize profit?

Why do we know this? Beyond the fun ridiculousness of the name itself (I dare you not to get “Wayne Tracker” stuck in your head…. have fun now), the real reason is Eric Schneiderman, attorney general of New York.

Schneiderman has an ongoing investigation into whether or not Exxon Mobil Corp. intentionally misrepresented its findings on climate change to their investors and the general public. He’d requested that all relevant emails, dealing with climate change and involving Tillerson, among several others, be handed over to his office.

Erik Larson reports at Bloomberg that the Wayne Tracker email was reserved for “sending the most sensitive messages to and from company board members, including communications about the risks associated with climate change.”

Well, 2.5 million pages of emails were provided. However, no one bothered to tell Schneiderman that, allegedly, much of Tillerson’s convos about climate change didn’t happen on his official email account.

Ah, Wayne Tracker. You sneaky son of a gun, you.

Erik Larson reports at Bloomberg that the Wayne Tracker email was reserved for “sending the most sensitive messages to and from company board members, including communications about the risks associated with climate change.” And now, Tillerson may be facing a deposition over this whole email scandal.

Oh my gosh! Are those two words appearing together — “email” and “scandal?” We’ve heard this song before, no? It’s a wee bit rich, a dollop o’ irony — a few Lil’ Irish descriptors for us, as we approach Saint Paddy’s Day. (I don’t know that “dollop” is Irish. I’m inclined to say it’s not, but what the hey.)

I’m not in the business of downplaying email scandals either, whatever “side” they happen to be on. Frankly, it seems a good idea might be to hire someone to advise our elected politicians to start conducting their shady business in the old fashioned way — via snail mail, in-person chat, or carrier pigeon. Because it looks like anyone over the age of 50 who is trying to pull a fast one on the interwebs is 100% not equipped to do so with any finesse.

Neither was Hillary Clinton's undisclosed private email server. (Perhaps ethical email use is uniquely problematic for secretaries of state...)

Well, what’s next for Rex Tillerson, of the Wayne tracking fame? With the NY AG office looking to depose him, this story probably has some legs.

That being said, a spokesman for Exxon stated that they had made it clear that Wayne Tracker’s email belonged to Rex Tillerson, noting that several of the emails were signed off as “Rex.”

I’d like to take this moment to revisit my earlier predictions about which members of President Trump’s cabinet were most likely to “wreak havoc” of some kind. Coming in second, only to Attorney General Jeff Sessions (who has really proven he deserves that first place slot), I actually chose Mr. Tillerson.

I hope I’m wrong, though. I hope none of Trump’s cabinet turns out to be corrupted beyond belief, and that includes Sessions and Tillerson. In fact, I hope this whole email thing is a misunderstanding.

Because it’s our country. It’s ours. They’re in charge right now, up in D.C., running the show, sure. But their choices, actions, character — it impacts all of us.

It would be best for everyone if they rocked the socks off their job performance. Clean as a whistle, zero corruption, full competence, total compliance with AG requests for pertinent documents in rather important investigations.

So for now, I’m going to take the tiny bit of joy I can wrestle out of this tale, hoping for the best, and just cuddle up with the fun fact that somebody, somewhere, probably wearing a suit, came up with a name like Wayne Tracker.