Wendy Carrillo: Standing Up for What I Believe In 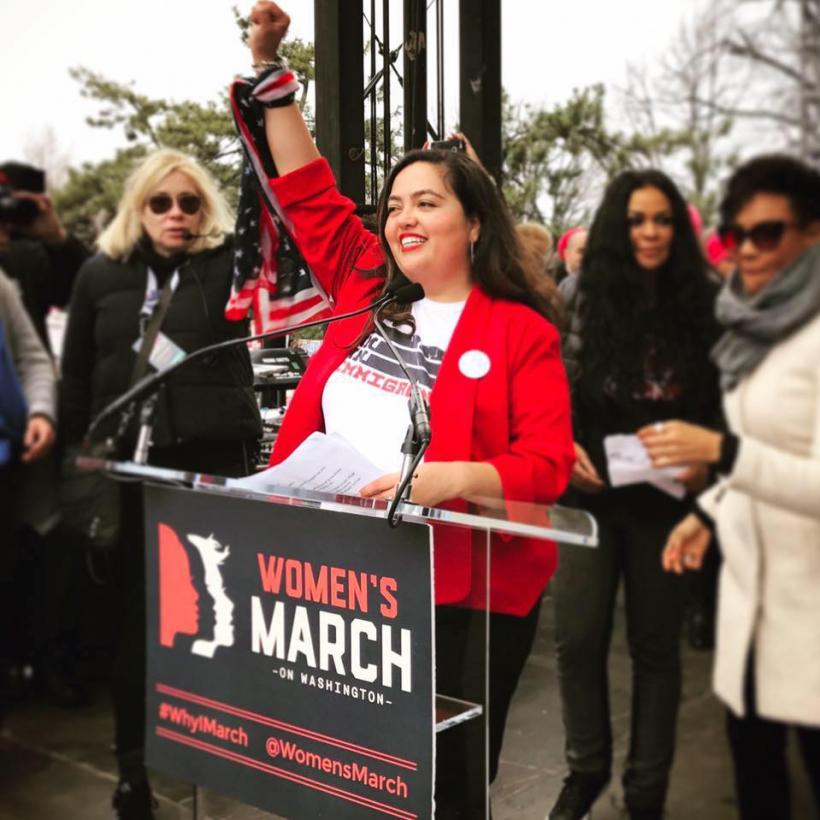 Wendy Carrillo is part of a field of 23 candidates who are competing to fill the Congressional seat in the 34th District in California.

The date for the election is April 4th. If a single winner doesn’t rack up over 50%, a general runoff will be held on June 6th between the top two contenders.

It’s tough odds and an impressive field. However, Carrillo’s resume goes beyond the usual bona fides and activities. She is known for her work as a labor activist, her previous role as a journalist and radio host, and for being on board the Bernie Sanders train from the get-go. Carrillo is a boots-on-the-ground type of person. She spent two weeks at Standing Rock to support the Dakota Access Pipeline Protest.

A child who was smuggled to America to escape the civil war in El Salvador, Carrillo has spoken about her personal journey in the context of the current fight for immigration rights.

One of the places she shared her story was at the Women’s March in Washington, D.C.

Carrillo was recently attacked by white supremacist David Duke (of KKK fame), in response to a campaign ad. In a Tweet, he stated, “Wendy plays the part of a ‘person of color’ masterfully, doesn’t she?” Ironically, it helped to raise her profile and donations for her candidacy.

Carrillo took time out from her campaign to answer these questions:

You came to the United States in 1986, to be reunited with your mother. Can you describe the circumstances?

“My mother made a courageous decision in her early 20s to seek a better life in the United States as El Salvador was in the midst of a civil war. The country was in total chaos. It was a violent time. Monsignor Oscar Romero had been assassinated while giving Mass. My mother came to find work and opportunity. Within a few years, she sent for me, my grandmother, and my aunt. I was five-years-old at the time, and when we crossed the Mexican border, I wore a Mickey Mouse shirt, and my hair was in pigtails. I was supposed to blend in.”

You learned you were not a legal citizen at 13-years-old. What was your path to citizenship?

“I was undocumented from the age of five when I arrived in the United States, until the age of 13 when I became a resident. Over the next few years, I worked a number of minimum-wage jobs to help save for legal fees, and then applied for citizenship. I studied hard to learn American history and the branches of government. I interviewed with an immigration agent, took the citizenship test, passed, and took an oath to be a citizen of this country and defend its Constitution. It was a very proud day.”

You have a bachelor's degree and a master's degree. You are proof of how immigrants enrich American society.

“Yes, I have a bachelor’s degree and a master’s degree — but I think having a degree is one of many ways to enrich American society. Immigrants come from all walks of life. Whether you are a gifted neurosurgeon or a farm worker, both enrich our society.”

What would you say to Donald Trump if you had the opportunity to speak with him?

“There are a lot of things I would say to Donald Trump. Most are not fit for print. I will say that I think my presence alone, as potentially the first formerly undocumented woman in Congress, would speak for itself.”

Fear across the country is high, from dreamers to those who have lived undocumented in the United States for decades. What advice would you give to people, including those who registered for DACA under the Obama administration?

“The fear in our communities is palpable, and for good reason. In my community, ICE arrested Romulo Avelica-Gonzalez while he was dropping his children off at school. His 13-year-old daughter, who was in the car at the time, videotaped the encounter in a heartbreaking video. The pain in her voice is so real, so raw, and a good reminder of the very serious issues we are dealing with as a nation.

As for DACA, Steve Bannon has suggested that he is keeping it in his “back pocket” to use as a strategic asset as the deportation force gets off the ground. Once again, this administration is targeting people who look like me — and our futures. So the threat is real.

I would tell DACA recipients to get involved. Now is the time to organize. To volunteer. To protest. To resist. I have a number of volunteers who are DACA recipients for my campaign, and their perspectives are crucially important.”

What is your vision for American moving forward?

“Fifty years from now, I think our grandchildren are going to look at us and ask us: ‘Where were you? What did you do?’ That’s why I’m running.

I’m a loud, bold, progressive who will unapologetically stand up for what I believe in: That women’s rights are human rights; that love is love is love is love; that Black Lives Matter; that the Fight for $15 should be national; that we should #Say Her Name; that Mni Wiconi (water is life); that Science is Real, that we’re Here to Stay; and that Sí, se puede.

I believe in the words of Rep. John Lewis (D-GA) who for many years said we should get into some ‘good and necessary trouble.’ We need to rise up and take responsibility for creating a country of what can be and what should be, a country of opportunity, not one of fear and oppression. I want to ensure that the voices of Americans who have for far too long been ignored are heard loud and clear in the halls of Congress. ‘We the people, in order to form a more perfect union’ must on all levels be involved in our government in order to ensure the American Dream is available for all, not just a select few.”

If you like this article, please share it! Your clicks keep us alive!
Tags
Wendy Carrillo
Politics
trending
Immigration
DACA