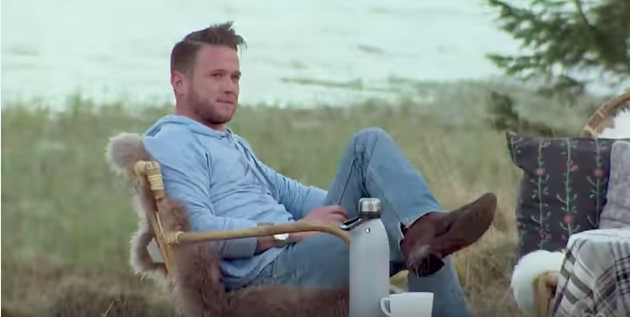 I’m not looking forward to watching two hours sprinkled with "Snake" Lee abusing the Black cast members, and I feel especially bad for Kenny, who deserves a real shot at love. (YouTube/Anna Marie)

It has become apparent that ABC doesn’t care about Black people. Until last night’s episode, the show’s plotline consistently performed a clumsy representation of a Black woman’s adventures in dating, while its undercurrent had featured a relatively tolerable ebb and flow of microaggressions and respectability politics.

But I knew that things were headed south as soon as previews for the episode started circulating — and so did everybody else.

Several other outlets have also reported on ABC’s decision to make racism the main attraction: GQ’s story was headlined, "Oh Good, The Bachelorette is Exploiting Racism for Ratings Now," while the New York Times observed, "An Instigator Emerges as the Racial Awkwardness of ‘The Bachelorette’ Grows." In retrospect, it feels like the show was building up to this idea of a "race war" between contestants all along.

This week’s episode begins exactly where we left off: Kenny and Lee are about to have a confrontation, set to some extremely dramatic music. Kenny calmly taps Lee on the shoulder and asks him to talk, then quietly calls him out for referring to him as "aggressive" to Rachel, which left Kenny wasting his one-on-one time defending himself to her. This is where ABC should've included some kind of trigger warning for their Black viewers.

Lee is smug and dismissive throughout the entire episode as he fixates on agitating Kenny. He has zero remorse and not an ounce of empathy for the emotional damage he seems to joyously assume he’s inflicting. He repeatedly denies doing anything wrong, twists Kenny’s words, and tone polices Kenny, while simultaneously being condescending and referring to him with names like "Buddy," which might as well be synonymous with "Boy" from Lee’s perspective. In another scene, Lee says he is going to smile with the sole intent of pissing Kenny off.

Right now, Lee is exhibiting many of the racist attributes that nearly all Black people have had to confront throughout their lives. The most important tool Lee brings to this table is his endless gaslighting. He spends all of his time on-screen agitating Kenny, but as soon as Kenny calls him on it, Lee immediately denies any wrongdoing.

The biggest problem is that Rachel can't see that any of this is happening. I’m positive that Kenny has faced a situation where he had to defend his word against a white person, which makes it extremely triggering to watch Kenny plead a case for his own humanity to Rachel and fight to prove he is a good person.

Being forced to do so on camera is what makes this even worse, and the episode quickly veers into the territory of painful exploitation rather than fun drama.

That we even need to entertain this foolishness between Kenny and Lee is a distraction from the episode and the show’s purpose, but I don’t care. But I think that’s the problem with how white people view racism: white people never have to endure it, so they think that the act of racism has to be accompanied with some sort of grand gesture, like dramatic music or fisticuffs. Yet Lee’s psychological abuse of Kenny and exaggeration of events has a historical context in how Black people in America have been continuously demonized for centuries.

The most disturbing part of this conflict happens within the last ten minutes of the show. Lee continues referring to Kenny as "aggressive" to Rachel, despite the fact that Will, a Black housemate, has already taken the time to explain to Lee exactly why that term is offensive. Lee responds by saying Kenny is using the "race card." (The fact he uses the term "race card" tells me just how racist he actually is.) He is so hellbent on destroying Kenny’s character that Lee tells Rachel that Kenny violently dragged him out of a van.

I have watched every episode of this show twice this season. This never happened. At least, there isn't any indication of the event that aligns with what producers are showing us. This accusation immediately reminds me of every unarmed Black man who has been shot and killed by law enforcement who "feared for their lives," specifically the story that Darren Wilson told about Mike Brown appearing to have "superhuman" strength.

This entire storyline is trash, and fuck ABC for thinking it was a good idea to exploit the "Angry Black Man" trope for ratings. In real life, this stereotype literally gets people killed.

When the producers aren't stoking the fires of intolerance and hatred, the rest of the episode had some really magical moments for Rachel and her boos.

Bryan does what Bryan does, and that’s seducing Rachel with his hot, steamy presence. He is completely unbothered by the drama going on in the house, and this gives him an advantage. She keeps saying she’s having doubts, that what they have is too good to be true, and with their undeniable sexual chemistry, this earns him yet another rose to the next round — and the first one-on-one date when she and the other remaining contestants head off to Sweden. This Bryan date involves the two rapelling from a super high slope that has the numbers "187" in the name. Rachel explains to producers that this is the murder code. Love how street but sweet she is.

The date is typical, except that Bryan kisses her midair. They end the date by gushing over how they think they are falling in love with one another. *Huge Eye Roll*

Rachel and Jack Stone also have a one-one, which is the most painful date I’ve seen throughout the entire season. More so than Freddy’s, even. And Jack Stone met the same fate: he presents as extremely effeminate, and Rachel refuses to kiss him, saying she felt a cold coming on and didn’t want to be contagious. Ouch. Their date is awkward as hell, and Jack is really trying to sell their connection, but it’s the end of the road for him when he expresses his desire to sweep Rachel off her feet to lie in bed all day, and Rachel just cringes. Right after that, she sends him home early.

At the rose ceremony, Rachel’s hair is in some mesmerizing beach waves, and she wows us all in a fitted black gown with a slit up the side and crusted diamond decals. Everyone is holding their breath, waiting to see if Lee or Kenny will get cut. Sadly, they both make it to the next round. Iggy finally gets cut, and stumbles on the epiphany that talking about practically nothing but other dudes on his date is a bad move. Then he starts crying... zero sympathy from me for that snitch.

There’s another group date with all the boys playing handball, and they show up in unitards made of wrestling spandex. The highlights here are Alex and his incredible man body; he even has a man bun this time, and a jawline chiseled by the gods. For some reason, Dean is wearing a jockstrap outside his uniform. At some point during the game, Peter picks Rachel up, and as Josiah observes, grabs "a handful of ass."

Peter and Rachel get another one-on-one, and he apologizes for any potential inappropriateness. They remind me of an old married couple; their chemistry is unprecedented, and Peter seems like he’s really paying attention to her. He seems totally invested in this relationship, past a competition. He proves to her he’s picking up on all her small glances and signs, that he knows how she’s feeling, and she soon rewards his intuition toward her. Things get hot and heavy when Peter says they have "a lot of ground to cover" to get to know each other, and Rachel suggests they do it in the hot tub.

The scene is steamy, to say the least — his hands are all up her back, and there’s some straddling involved. It comes as a shock to everyone that Peter spends three hours in the hot tub and does not receive a rose after their date.

Sexy Alex shows up for the next date, and reads Rachel a handwritten letter expressing his feelings. He has this hot Russian accent too, and it's my humble opinion that human man candy Alex doesn't get nearly enough time on screen. I want less Racist Lee and more Sexy Alex.

The episode wraps up with another annoying cliffhanger. Tomorrow night, Part Two of the two-part special airs. I’m not looking forward to watching two hours sprinkled with "Snake" Lee abusing the Black cast members, and I feel especially bad for Kenny, who deserves a real shot at love. Hopefully, tomorrow we’ll watch him salvage his connection with Rachel, but if not, I’m perfectly ok with losing both bachelors and getting back to Rachel’s quest for love.

If you like this article, please share it! Your clicks keep us alive!
Tags
The Bachelorette
Lee
Kenny
Rachel
racism
snake Lee
Alex
Peter
Jack Stone