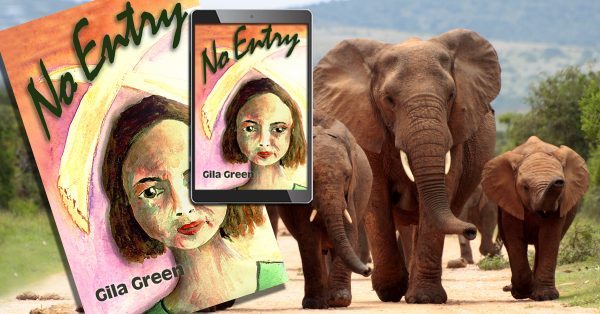 Excerpt from No Entry

“Brilliant. You must see a kill,” Nadine says. Nadine bounces in her seat. “It’s larger than life.” She brings her hands together.

“Told you, you’d thank me.” Yael watches as Nadine chews on a strip of biltong, passing a square to Sipho, who accepts.

“Kill must be recent,” Sipho says after he swallows. He points to another scavenger in the sky with his chin.

“Estimating the off-road land location by the 60-meter aerial view of circling vultures takes more skill than you’d think,” Nadine says to Yael, turning at the waist to face her again. “Sipho’s the best.”

It doesn’t surprise Yael that Sipho would be good at estimating distances, given how talented his drawings are. She keeps a close eye on him as he aligns the car with the spot he believes is the location of the kill. He stands in his seat, strains to see something.

“Not a good idea. We aren’t on a registered drive. Better to leave it,” Sipho says.

“This may be her only chance to see a kill, Sipho. We’ve come this far.”

For a minute, Sipho and Nadine eat silently, and Nadine passes Yael a bottle of water.

“Come on,” Nadine urges. Sipho edges the jeep towards the lowest grass on the horizon. There are no paths anymore, just clearing between trees. He strains to idle the car slowly, to avoid spooking the animals feeding on their kill. Yael realizes she’s holding her breath and inhales. She presses her knees together and clutches her camera to her chest.

A hyena darts from the long grass. The muscles in Yael’s neck and shoulders tense, and she nearly cries out. Her heart pounds. Sipho said they shouldn’t be here, and that’s enough for her.

“Maybe we should go,” Yael says. There’s a tremble in her voice.

“Don’t be silly,” Nadine says. She looks pointedly at Sipho’s rifle. Yael notices Nadine’s pistol is inches from her hand. “Ready your camera.”

“If there’s hyena,” he says. “The ground scavengers are here.”

The breeze blows from the west, cooling Yael’s neck and back and pushing any smell in the opposite direction. She was already using the knowledge she’d learned in the camp.

“Damn. An elephant!” Sipho says. He slaps his forehead with his hand.

“Where?” Yael whispers, half standing in the jeep. She searches around for more of a herd.

He inches the jeep alongside the enormous gray lump on the ground as the last of the hyena take their positions at a distance. They need to size up any new competitors for their dinner.

Sipho continues millimeter by millimeter towards the gray heap positioned dead ahead. The rips into the hind are clear from where the hyenas were active. The thick leathery skin is broken, revealing the firm flesh and congealed blood.

“The hyenas have been busy for half an hour,” Sipho says. His voice is always low, but now it’s lower than usual.

Yael has her hand over her mouth. Slowly she realizes that this horror must be recorded. She reaches for her camera.

The vultures flutter in the adjacent trees, taking up a more defensive position now that the hyenas have been pushed away.

Yael snaps at everything her eyes land on.

“Did they kill this elephant?” she asks, her voice unsteady.

Sipho banks left to reveal the pool of dried blood and swarm of flies at the front of the murdered animal. Nadine gasps and covers her face and nose with a bandana. Yael only has a partial view from the back of the jeep, and for her, the smell of death is still masked by the breeze. Over the low hum of the engine, she hears the steady buzz of flies mobbing the carcass. The jeep creeps within ten meters of the animal’s head.

“Best you don’t look,” Sipho says. For the first time, Nadine doesn’t argue with him. “But it’s critical we identify if the tusks are there.”

It becomes clear the tusks are gone, gored out of what was once a female elephant’s face.

“Poachers,” he says. “Bastards! They shot her in the head."

Elephants may become extinct in our lifetime.

"Elephant poaching a very real and growing threat in the Kruger Park."

"It is concerning that in 2017, 67 elephants were poached in the Kruger National Park."

Despite the efforts and outrage by South African Citizens Against Poaching, you don’t have to look hard to find horrifying statistics when it comes to the current state of the elephant population.

Melissa Cronin, a conservation ecologist and writer, says that elephants are being slaughtered faster than they're being born and could become extinct in our lifetime. Wildlife negotiator, activist and author of Birdsong after the Storm, Margi Prideaux writes of a future where we will not smell elephant musth anymore (musth can be defined as the annual hormonal condition of male elephants when they become adults).

There's no denying there's a problem. "A recent resurgence in demand for ivory, particularly in China, fuels this rampant poaching epidemic," and poachers are unlikely to halt the mutilation of wildlife when just one rhino horn nets enough money to buy a car and TV, and send their children to school. And yet when it comes to the Western world, it's almost as if we can't see, feel, or hear.

This tendency to ignore impending global catastrophes is, according to Norwegian psychologist and author Per Espen Stokness, because of five innate psychological barriers, including distance and denial. Author's note: I wrote this last paragraph before the current coronavirus pandemic, how much stronger it resonates now and how much more tragic.

Animal trafficking and murder happen so far from the West that distance leads to complacency. It's true that tourism helps. As John Scanlon, the secretary-general of CITES, writes, the tourism sector is not a fringe player in the fight against illegal wildlife trade, but at the center of it. Still, he warns that tourist operators cannot fight alone; individual tourists must act responsibly, or there won't be any wildlife left to attract future travelers.

To break through these psychological barriers, environmental writers need to bypass them and look for new frameworks that will motivate people to act. This is precisely what the YA novel No Entry aims to accomplish. Readers are able to identify with my heroine and follow her experience when she comes in contact with elephants.

People who are concerned about wildlife and the environment have always turned toward well-researched eco-literature as a form of education, motivation, and inspiration. However, eco-fiction is now pushing its way up the popularity ladder reaching people who formerly lacked environmental awareness and an inkling of what they could do.

I believe it's the youth of today who hold the answers for tomorrow, which is why I chose to expand into the Young Adult genre. Since writing No Entry, I’ve been delighted at the level of interaction from young readers. Through social media, readers have been able to connect with me, and they're asking for more details and information.

No Entry offers a combination of action-packed adventure, and a strong female teen heroine, whose story often inspires a new breed of eco-warriors to intervene. All signs lead to young adult eco-fiction remaining active and robust for some time. It’s a travesty that elephants don't share the same luxury.

If you like this article, please share it! Your clicks keep us alive!
Tags
young adult
YA
Books
conservation
endangered
author