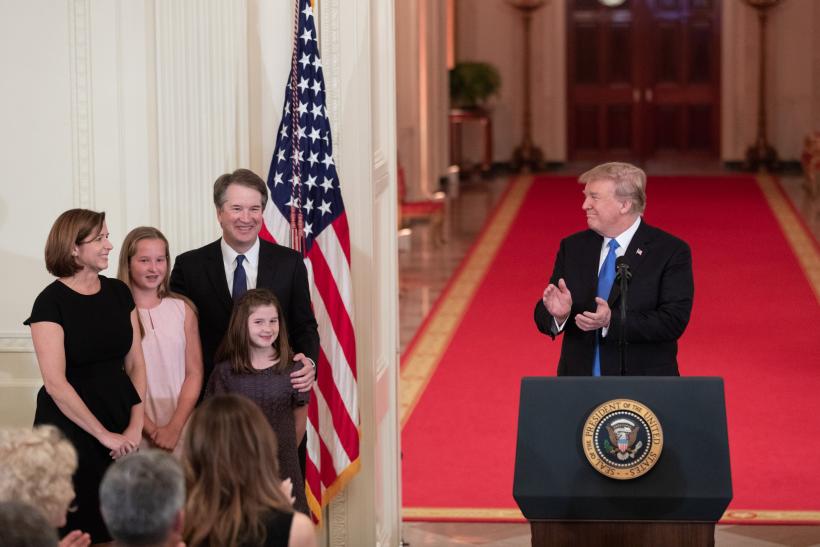 Supreme Court nominee Brett Kavanaugh now has two accusers. Listening to debates about the allegations of sexual violence committed by the current SCOTUS nominee, I have been particularly surprised at those who cling to his profession as an attorney and judge as an indicator that he would be morally incapable of doing something as reprehensible as rape or sexual assault. That was, in fact, the opposite of my experience as a law school student.

In my 1L criminal law class, my professor — a woman — told us at the beginning of the course that we would read and discuss the rape cases last. I assumed it was because there were potential victims in the room and that she wanted to save the most upsetting subject for last because of the trauma it might trigger. What I didn’t see coming was how many of my male colleagues would get so defensive over the consent issue when we got to the rape cases. What was it that bothered them so much? Perhaps it was that they, future lawyers and judges, had engaged in sexual relations with someone without their consent?

In movies, victims of rape often scream “no” and claw at the aggressor’s face, but that’s not real life. Why? Because in most sexual assault and rape cases the victim knows the aggressor.

Our section had been grinding it out together in a first-year law class at Nova Southeastern University in Ft. Lauderdale, Florida. We had created incredibly strong friendships, some romantic relationships, many of which have lasted. As law section colleagues, we ate meals together, went to bars together on the rare evening off. More often, when we weren’t in class, we spent our fourteen hour days locked away together in the law library and as study groups in our apartments, trying to survive the brutality of the Socratic method our professors so perfectly executed.

Then came the time to discuss rape cases, and it set the room on fire. My male colleagues were furious, hysterical and pitifully defensive — they couldn’t fathom that lack of consent could be communicated by anything less than a woman kicking and screaming “no” at the top of her lungs. Anything less, they argued with their newly acquired 1L legal vocabulary, would be “unreasonable." Based on their reactions, it dawned on me that these men  — who up until that point I had come to consider friends I would have for the rest of my life — may have sexually assaulted someone, if not raped them.

This was why my professor waited to discuss the rape cases last — because we were among rapists.

The consent issue has never seemed that tricky to me: if a person doesn’t show with words and actions that they want to engage in sexual relations, then that qualifies as a lack of consent. If the other party doesn’t seem like they want to be touched, or penetrated, they’re not playing hard to get; they just can’t find the words to express themselves because of the trauma of the moment. If their consent seems ambiguous, better to stop rather than perpetrate a sexual assault.

Or, for example, in the case of Judge Kavanaugh’s initial accuser, Professor Christine Blasey Ford, who had been drinking when Kavanaugh allegedly assualted her — impairment is a textbook case of lack of consent. In movies, victims of rape often scream “no” and claw at the aggressor’s face, but that’s not real life. Why? Because in most sexual assault and rape cases the victim knows the aggressor. They might be a work or school colleague; they might be a family member or a trusted member of the community like a pastor or camp counselor. It’s hard to scream “no” when there is a personal relationship with someone.

If it hasn’t happened to you, it’s hard to explain the split-second decision making that has to happen in a situation of extreme shock and, often, fear.

That is precisely what happened to me. I was on vacation in Haiti staying with the family of a “friend” I had met while in law school in Florida. He took me to parties, introduced me as his lawyer friend from Miami who spoke several languages and was interested in international development work. His friends were beautiful, foreign, rich and very impressive. He was incredibly gracious, and I was charmed by the people, dinners, and parties. I was having the time of my life and saw a bright future for myself there.

Over the course of a month, there were several uncomfortable moments. One morning I woke up to my aggressor standing in my room staring at me while I was sleeping. So, I started sleeping with his sister in her room. His family found it odd but endearing; I didn’t explain why. Another day, his father drew a horizontal line across my pelvic bone with his pointer finger; I don’t remember what he was explaining to me because it caught me so off guard and made me so uncomfortable that it was like an out of body experience. I was too embarrassed to say anything at the moment. It had been such a fantastic trip; I didn’t want anything to ruin it. I pretended like it didn’t happen and planned to find a new place to stay.

You Might Also Like: #TheresNoPerfectVictim—Or Truth To The Belief That We, As A Society, Care About Rape Survivors At All

I should have left his house that very day, but I didn’t. I went with him and a female friend to a nearby beach party. On the way back, while his friend was asleep in the car, we stopped at his beach house. We had been drinking, and I decided to jump in the water to sober myself up a bit. What happened after that remains a somewhat blurry, high-speed memory. He jumped in behind me and pushed me underwater — I thought he was going to drown me. He grabbed me by the neck and pulled my head back up out of the water and pushed his tongue down my throat. With saltwater burning my eyes and my throat, I struggled to get him off me. As he pushed me underwater again, I swallowed a mouthful of water. At that moment, I saw myself dead in my mind’s eye, my body slowly floating to shore somewhere— bloated, purplish blue and red from sun exposure on the surface of the water. Maybe little kids or birds would find me. Perhaps I would be eaten by fish before that. My mother would be so sad. No one would know what happened.

I don’t remember very well what happened next. I left and checked into a  hotel in Pétion-Ville. Shaken. Embarrassed. I told no one.

I was sure people would tell me it was my fault for drinking and getting in the water. I secretly felt like it was somehow my fault, too.

Besides, he was powerful and from an even more powerful family in a place where I was a nobody, a foreigner. I didn’t want a scandal. I tried to pretend it never happened. I was a law student and a physically strong woman, a former boxer and capoeirista — how could I let something like this happen to me? I found out later he had been accused of raping another woman who stayed at his house under similar circumstances in international development work. No one had bothered to tell me.

Until now, I'd mentioned the incident to less than ten people because it is something that — in spite of compassion for myself and my rational, legal mind — I am still embarrassed. I still feel like people would judge me if I told them, even though they would feign empathy to my face.

“I have been wanting to write you for a long time, but out of respect for your mother, sister and now your child, I didn't. You sexually assaulted me in the water in Haiti, and I almost drowned, after we left that party at the beach. Maybe you don't remember. Maybe you do. But I can never forget it. I am an attorney now — a criminal law attorney. This is evidence of my testimony about your rape. If it ever comes out again that you raped someone, trust me that I will be a witness against you. I have worked with sexual abuse survivors. I have met lots of sexual predators like you: the kind that gets away with it over and over because of their money and circumstances make it incredibly intimidating to come forward.”

If you like this article, please share it! Your clicks keep us alive!
Tags
Brett Kavanaugh
SCOTUS
SCOTUS nomination
Rape
Sexual Assault
consent