An Interview With Lana Popovic, Author Of Wicked Like A Wildfire 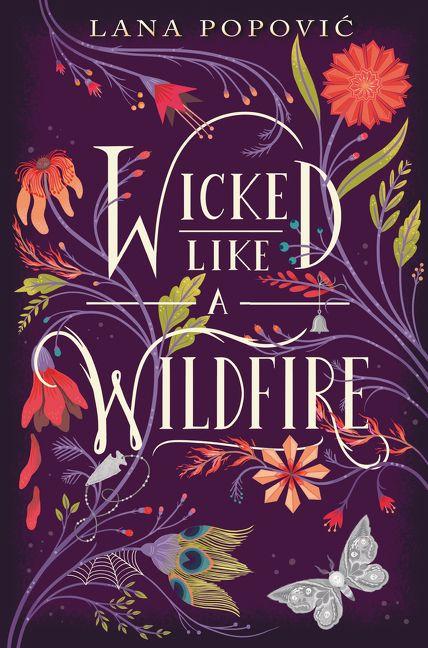 Image of the cover from Harper Collins Publishers

Wicked Like a Wildfire, the debut young adult novel by literary agent Lana Popovic, is one of those books that seems created just to fit the description “atmospheric.” A delicious work filled with descriptions of sights, scents, and tastes so vivid you can almost see, smell, and taste them yourself, in addition to a familial bond so precious it made me ache for one of my own, it’s also an expansive fantastical tale of magic and intrigue that keeps you on the tips of your toes.

It may be Lana Popovic's debut, but she's no stranger to the world of children’s publishing — Popovic is a literary agent with Chalberg-Sussman and has her own list of clients like Rebecca Podos, Emily Henry, and Angela Palm.

I’m fascinated by the dichotomy of being both author and literary agent (or editor, or publicist), so when the opportunity came up to interview Popovic, I was eager not only to ask about her book, but to inquire a little more deeply into what it’s like to be on both ends of publishing.

Let’s talk about your debut novel, WICKED LIKE A WILDFIRE. Where did the idea come from?

Most of my ideas come from isolated visuals. Here, I had an image of two dangerously beautiful sisters with scented ribbons in their hair, out at night in a little seaside town for some sinister purpose. The story unraveled from there: why were the ribbons scented? Who had braided them into the sisters’ hair, and what were they for? Why did the sisters’ beauty seems both ominous and deeply sad?

What was the process of drafting the book like?

I had the basic arc in mind before I began writing the book, and I also went on a trip to Montenegro with my parents to refresh my memory. While there, I jotted down lots of sense-impressions and unrelated sentences and thoughts, and then I wrote the first draft of what we’d later sell to Katherine Tegen Books — at which point, my editor had me rewrite about 70 percent of the story. It started out as a quiet, magical realism road trip story about witchy sisters getting to know each other, and really expanded into something much bigger and more elaborate under my editor’s ruthlessly benevolent guidance.

I really enjoyed this book. I was especially touched by how well you portrayed the bond between the sisters. It was extremely real, and without it a lot of the book wouldn’t have made sense. How did you tap into that in order to translate such a bond to writing?

Thank you! It’s amazing to hear that the heart of this book — the part I love best, too — came through so clearly. Relationships between women have always fascinated me the most, in literature as much as in life. I often think of Joss Whedon’s famous quote, when asked why he insisted on writing badass female protagonists: “Because you keep asking me that question.” Most of my favorite books and TV shows place complicated women and their multifaceted relationships front and center—Jacqueline Carey’s Kushiel’s Legacy series, N.K. Jemisin’s Inheritance and The Broken Earth series, Buffy, and Battlestar Galactica are some of my obsessive favorites in that respect. I’ve also been lucky enough to grow up surrounded by powerful women. My grandmother traveled with my family and functionally raised me and my brother while my parents worked; she and my mother are two of the greatest loves of my life. And though I don’t have a sister or a twin — I wish — I’ve had a wealth of beautiful female friendships and lovers over the course of my life, to draw on for both strength and inspiration.

Another thing that truly caught my eye were your descriptions, specifically of scent, sight, and taste. They were just… mind-blowingly good. On a craft level, how did you manage to create such vivid images?

Ahhh, thank you again! Tastes and smells were the easiest, because I really am the ultimate hedonist when it comes to food and perfume. I’ll try anything once, just to know what it smells or tastes like, even if it’s totally foul — that’s actually kind of fun, too! For scents, I spent a lot of time sniffing handmade perfumes at Aroma Sanctum in Salem; the owner, Akuura, actually designed custom fragrances for Mara and Iris! I also blew so much money on Black Phoenix Alchemy Lab fragrances. They have wonderful descriptions of each scent on their website, and it was fascinating trying to parse out notes and match them to the listed ingredients.

Iris’s visuals were the most challenging, but also the most fun. It got down to, like, how many different ways are there to describe how something “explodes” into fractals without pushing things too far? How do you convey infinite nesting patterns in a way that remotely makes sense to a reader? I looked at a lot of fractal art for inspiration, too. Suicidebysafetypin on Deviantart has unbelievable work.

How do you manage your time being both an author and a literary agent?

I split up my work days into agenting and writing, and try to focus on exclusively one or the other during the designated times. Of course, this gets blurry sometimes — especially if I’m close to a deadline or I have a new draft of a client project that I’m really excited about — but I try to allocate my time as stringently as possible. It’s easy to slip into a “Woe, for the muses are not with me this day!” mindset when it comes to writing time, but ultimately it’s not just my artistic calling — it’s also my job, and I do my best to treat it like one.

I’m really fascinated by authors, like you, who also work on the “back end” of publishing; why and how did you get into being an agent?

Like most people outside the publishing industry, I wasn’t even aware that literary agenting existed as a career until I began the publishing and writing program at Emerson College. As soon as I started digging into it, I realized it was the perfect bridge for me — a creative profession that relies heavily on skills I learned in law school and had been (enthusiastically) planning on not using again. I started interning at agencies in Boston, taking on my own clients while I worked at junior positions, and eventually transitioned to full agenting.

What is the most rewarding thing about agenting?

Working with talented, dedicated, and overall tremendously inspiring people. I’m painfully extroverted, if that’s even a thing, and writing is a pretty lonely occupation on its own. As an agent, I get to share in and contribute to other writers’ journeys, and forge friendships and connections in the industry while working on my own projects. It’s the best of both worlds.

How did you go about finding an agent for your own work?

Taylor Haggerty at Root Literary has represented me for four years now! We knew each other from our time together in the Emerson publishing and writing program, and I reached out to her with my first project, fondly known between us as #vampirelesbians. She signed me for that one, and while we received passes and requests for revisions from editors on that project, I went ahead and wrote Wicked Like a Wildfire.