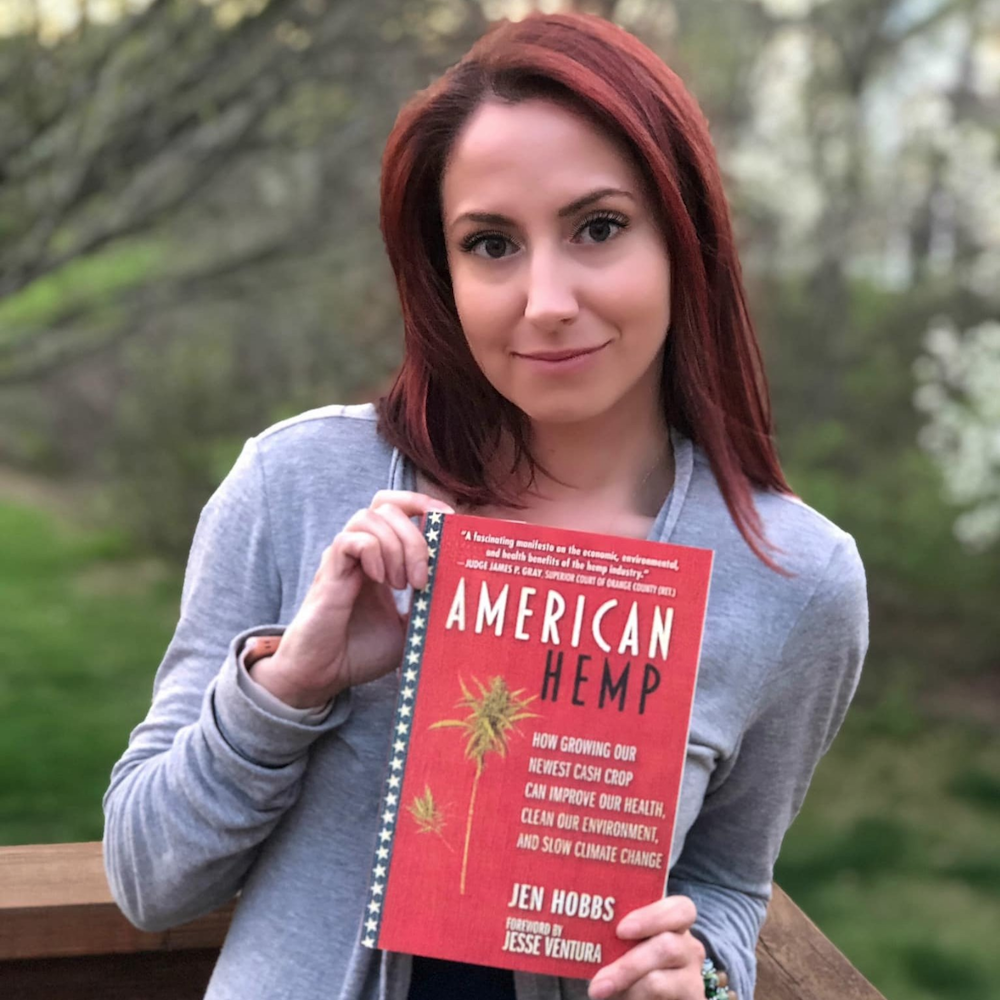 Recently I had the pleasure of chatting with Jen Hobbs about her book How Growing Our Newest Cash Crop Can Improve Our Health, Clean Our Environment, And Slow Climate Change.

About the book: Filled with catchall research, American Hemp examines what this new domestic crop can be used for, what makes it a superior product, and what made it illegal in the first place; the book also delves into the many health and medical benefits of the plant. Hobbs weighs in on how hemp can improve existing industries, from farming to energy to 3D printing, plus how it can make a serious impact on climate change by removing toxins from the soil and by decreasing our dependence on plastics and fossil fuels.

American Hemp lays out where we are as a nation on expanding this entirely new (yet ancient) domestic industry while optimistically reasoning that by sowing hemp, we can grow a better future and save the planet in the process.

For more on the book and updates, check out Jen's blog. 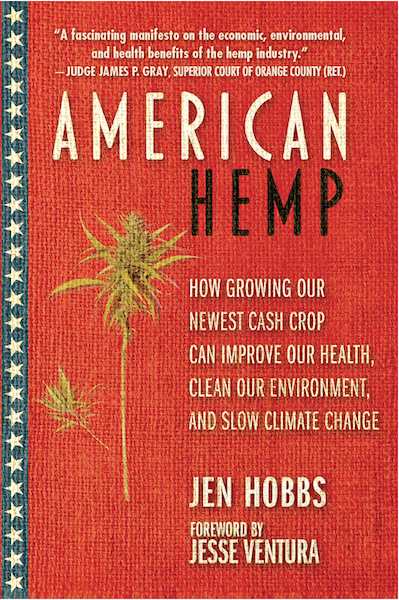 1. When did you first start writing about hemp, and what drew you to the subject?

I started writing about hemp in 2015. I was the co-author of Jesse Ventura’s Marijuana Manifesto; although the book focused on marijuana (and why it should be legal), we dedicated a chapter to hemp. We didn’t want to lump everything about hemp into a book that had “marijuana manifesto” in the title (plus to cover both plants with equal detail would’ve easily doubled the length of the book), but it made sense to at least give an overview of the many benefits of the plant and show the differences between hemp and marijuana.

The research for that chapter was what inspired me to write American Hemp. I learned a great deal more about hemp’s history and uses than I was anticipating, and I was thrilled to hear from people all over the country about how that one chapter was a particularly compelling argument for legalization. Most people didn’t know all of hemp’s benefits (such as phytoremediation) or how the large role hemp played in American history and the American economy.

What really draws me to the subject now are the ways hemp is being integrated into technology to off-set carbon emissions and to create more sustainable products. For example, hemp and plant-based material are replacing carbon fiber on cars and airplanes; there’s 3-D printing filament made from hemp, and there’s even an Australian company creating 3-D printed homes from hemp biomass. I’m truly fascinated by how hemp will continue to integrate and improve existing industries. In some ways, the newly emerging hemp industry is similar to the way the Internet was developed. We started with dial-up, clunky home desktop computers, and now there are smartphones and wifi, and its integrated into nearly every aspect of our lives with seemingly endless uses and possibilities. We now know what hemp can do, it’s being integrated, and it’ll be interesting to see how that continues to grow and expand.

2. How has the public perception of hemp changed?

Hemp is now federally legal, and that was by far the best course-correction to date. The legalization process finally defined what hemp is and its many uses. I think most people have now come around to realizing that all of the uses for hemp aren’t pie-in-the-sky theoretical or wishful thinking. However, I still see articles from time to time that dismiss hemp’s seemingly endless uses as hype or chock it all up to diehard advocates who need a reality check (sort of reminds me of articles that claimed this Internet thing is a fad). Some articles even go so far as to claim facts were researched, and no evidence was found to support the case that hemp can actually do all of these incredible things. And that’s why I wrote my book.

I compiled all the credible sources to show not only what is possible, but to give concrete examples of how hemp is already being used to solve so many problems. I give an example of farmers in Italy using hemp to take industrial toxins out of farmland so that they can grow crops and livestock again. I talk about how industrial hemp is providing the fashion industry with a sustainable, durable, high-quality fabric that doesn’t need synthetic, oil-based chemicals to produce. I explain how hemp-derived CBD is changing the medical field’s perception of cannabis as a whole because, in many cases, it is providing a better source of relief than pharmaceutical drugs, including opioids.

I think as more hemp products enter the market place, the more common it will be, and the easier it will be for people to change biases towards it. The next generation will always know hemp as a legal, agricultural commodity, and I’m sure it’ll be just as difficult to explain to them how on earth people were duped into thinking the plant was dangerous in the first place.

3. Who do you hope reads your book?

Lawmakers and anyone who wants to know more about hemp. Hemp was listed as a Schedule 1 Narcotic by the DEA for generations. (Schedule 1 Narcotics are highly-addictive substances with zero medical value — this is the same classification as heroin.) Now that hemp is defined as an agricultural product with nutritional, medical, and industrial benefits, tracking down all the facts can be challenging. The more people who are educated about hemp, the better, and I hope my book helps clarify a lot of misconceptions.

I love writing fictional short stories and toying with ideas for novels. One of my colleagues (who went on to win the PEN/Hemingway and other impressive awards for his novels), told me to always start by telling the story at the beginning. Figure out where the beginning is, start there, and guide the reader along the path of that story. While that may seem like simple advice, it’s easy as a writer to get caught up in backstory or derail from the actual story, which means you’re derailing the journey for the reader.

As for the worst writing advice, that fortunately came with a silver lining. When I was in the process of finalizing my MFA thesis (a collection of short stories), I submitted a chapter to literary journals, hoping to get it published. I eventually did, but earlier on, I heard back from an editor who said that she liked what I sent her, but couldn’t publish it as-is (she essentially didn’t care for the way it was narrated). She sent me notes on the entire thing, and I forwarded what she wrote to my thesis mentor, who simply told me not to worry. (I was worried!) Shouldn’t I take her advice? She took the time to give me such detailed feedback.

What I learned from my mentor was that it wasn’t possible to please this particular person. She had a different concept for what she wanted to publish than what I had written, and even if I took the time to rewrite it for her benefit, it still might not be on par with what she was conceptualizing, given it wasn’t the way I viewed the narrator or even the characters I created. Critiques are often very subjective, and everyone will have opinions. That doesn’t necessarily mean those opinions should lead you to alter your voice and your style of prose significantly. That isn’t genuine, and it’ll always leave you doubting your work. If a detail didn’t come across for one reader, it might be painfully obvious to another reader. One reader might be appalled that a younger character frequently curses, another reader might find it hilarious given the context of when the character chooses to curse. That’s why there are so many genres of books. So I thanked the editor for her feedback, but I didn’t rework the piece. I eventually found a home for it elsewhere, where it won honorable mention in a writing contest.

I’m just about ready to send my publisher the manuscript for my next book, Cooking with CBD, which is going to be available in stores in June 2020. Since this is the first cookbook I’ve ever written, I’ve been reading a whole bunch of cooking and baking books to get a feel for different formats. I’m also reading Coraline by Neil Gaiman to my daughter (she loves spooky stories).

Jen Hobbs is a graduate of Fairleigh Dickinson University’s MFA program. She's the author of American Hemp: How Growing Our Newest Cash Crop Can Improve Our Health, Clean Our Environment, and Slow Climate Change and the co-author of Jesse Ventura’s Marijuana Manifesto. Before she started writing about cannabis, she was a publicity consultant, representing Oscar and Emmy Award-winning clients as well as politicians and authors. While living in California, her family started a medical marijuana collective and bred a variety of THC and CBD medicinal marijuana strains. She now resides in O’Fallon, Missouri, with her husband, Andrew, and daughter, McKayla. Her family owns and operates The Hive, a local CBD store, and Nature’s Nectar, a CBD extraction facility in Missouri. Her forthcoming book Cooking with CBD: 50 Delicious Cannabidiol-and Hemp-Infused Recipes for Whole Body Healing without the High will be in stores nationwide June 2020.

If you like this article, please share it! Your clicks keep us alive!
Tags
q&a
author
authors
Books
hemp
legalization of marijuana